I ran one of my favorite races this weekend! The NYRR New York Mini 10K is an all-women’s race that pretty much has it all: an inspiring professional field (Des! Molly! Sarah!), thousands of happy female runners lined up behind them, a great course, and stellar crowd support. I’ve run the race twice before — first in 2011, during which I learned the lesson that “not every race will be a PR,” and again in 2016, when I decided to race in a skirt for the first time, and experienced some pretty brutal chafing.

This year, it wasn’t a PR and, as tradition holds, I did chafe quite a bit. But it was my favorite Mini yet! 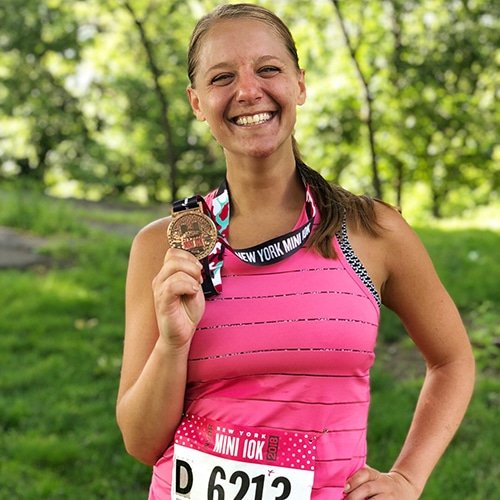 YAY! Pink is my favorite color!

For the past few weeks, my stomach hasn’t been feeling great. I’ve had some Crohn’s-like symptoms — nothing I’m too concerned about, but definitely something I’m keeping an eye on — so I haven’t been running outside much. (Also my motivation to run outside, alone, along the waterfront — which is pretty but gets pretty boring — has been nonexistent.) I’ve still been doing a few Orangetheory classes a week, and I generally feel fine during those, but for the most part, outdoor running hasn’t excited me.

But then, two days before the Mini, I found myself really wanting to run through Central Park. So I signed up, and picked up my bib Friday before the race.

I was out of breath walking up three three steps to get my race shirt, so that was a good sign.

As has been the case throughout this pregnancy, though, I went into race day without any goals or plans. It was another fun run I’d get to enjoy with the baby in tow! At just about 21 weeks, I am so grateful I’m still able to run, and was thrilled Brian and Ellie were down for the adventure. 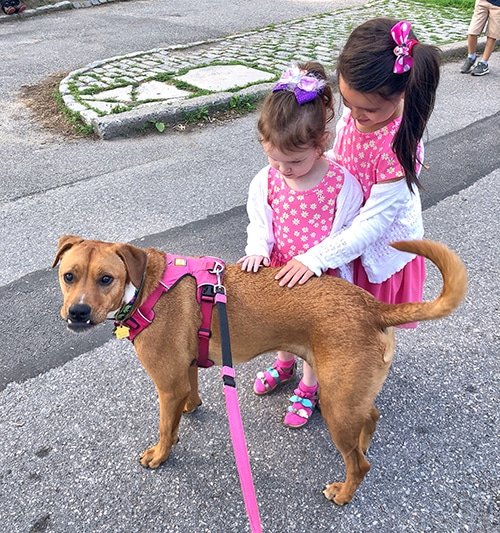 While I was running, Ellie was having PLENTY of fun. I cannot wait to get Ellie and her little brother or sister so many matching outfits.

I woke up Saturday at 5:30 AM. The race starts at 8, so I gave myself loads of time to do bathroom things, get ready, and get into the city. Brian, Ellie, and I were in the car by 6:55 and they dropped me at the start around 7:15. I proceeded directly to the Time Warner Center to use the lovely indoor bathrooms, and stayed there for a while. (I’m no snob — a porta-potty is fine by me — but the lines inside are generally much shorter.) 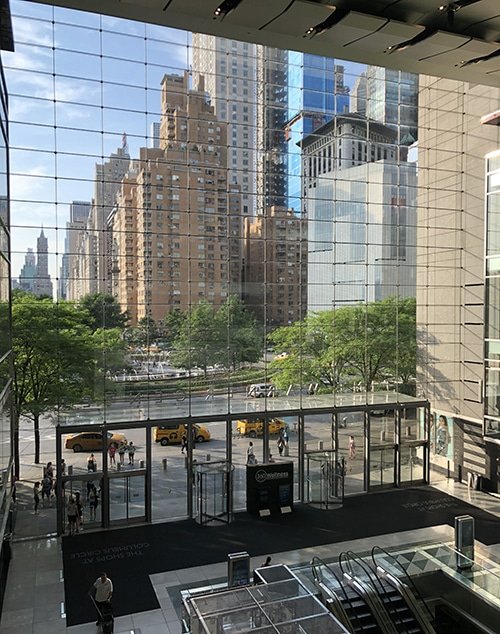 One of my favorite views in all of NYC (from the Time Warner Center).

Finally, around 7:40, I made my way outside and into Corral D with some old friends and lots of new ones.

The race starts in short waves — every few minutes, they release a few corrals. I believe I was in the second wave. There was a lot of slightly cheesy “rah rah girl power” stuff at the start. The usual Beyoncé “Run the World” on repeat, lots of chants along the lines of “yay ladies!” and some encouragement to pat our neighbors on the back before we got started. I rolled my eyes for a second, knowing full well this would never happen at an all-male race. But I got over it, because everyone was happy and I was happy and YAY RUNNING. 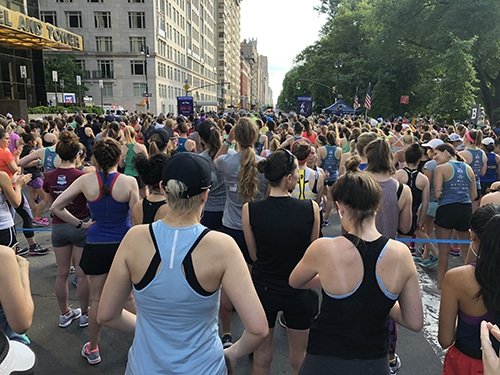 I love all-women’s races. I really do.

Then we were off!

I love the Mini course because it’s not just a typical loop of Central Park. The course starts going north along Central Park West, then makes a right turn into the park at West 90th Street. From there, runners follow a clockwise loop all the way to Tavern on the Green, where the New York City Marathon finishes. It’s perfect because you get to miss some of the west side rolling hills, and even though you climb two hills in Harlem, to me they feel easier than the one longer, steeper hill (which you get to run down instead). I also love getting to run down Cat Hill. It’s my favorite Central Park course.

I hugged the right side of the road when we started, knowing Brian and Ellie would be around 64th Street cheering. I spotted them easily, and as usual, Ellie’s little eyes were darting around trying to find me. Then, I yelled to her and she saw me, and she wanted to come with me. Poor pup. We need to find more dog-friendly races to do together! 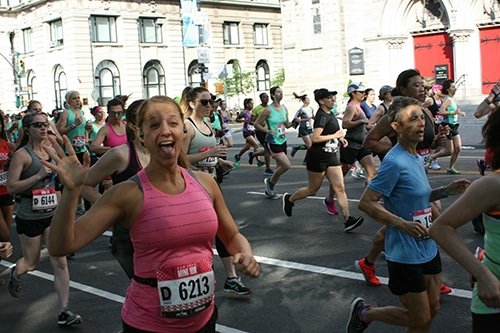 Never not a total spaz when I see my loved ones…

I told Ellie I’d see her “soonish,” and continued on.

Fast-forward 800 meters or so, and there was Ellie, sprinting down the sidewalk with Brian (leashed, don’t worry, and not on the course!). She wanted to be part of the race so bad! So she ran along the sidewalk for as long as Brian could keep up and she looked so happy and proud to be included! It was great.

Based on how my stomach had been feeling, I anticipated walk breaks and bathroom stops like the ones I made during the Superhero Half Marathon a few weeks ago. But I felt great. (Race day magic!)

I didn’t wear my watch (I’ve retired my Garmin for the duration of this pregnancy and am very happy without it) and just ran what felt comfortable for me. I never got out of breath and just kept running easy and happy. I high fived little kids out cheering, gawked at puppies, and checked out the make and model of every stroller I saw along the way. 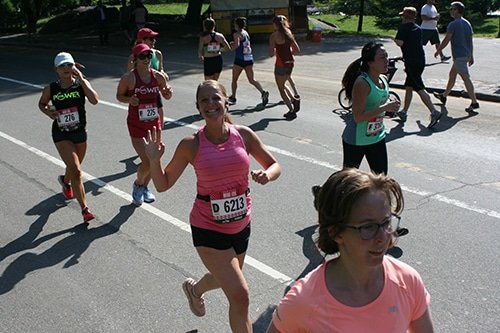 At Engineers’ Gate — East 90th Street, and the place I used to enter the park every morning to run — I saw a few friends and gave a nod to Bernie’s Bench. My favorite bench! I enjoyed the long, flat road for a while, ran past the spot where I filmed those JackRabbit commercials a million years ago, and then waved to the cat as I cruised down Cat Hill. At that point, with 1.5-ish miles to go, I knew I’d be able to finish the race without having to make a single bathroom stop, and that felt like a massive victory! (It always does, even at my healthiest.)

As I reached the southeast corner of the park, I could see the finish line across Sheep’s Meadow. The crowds started getting thicker, and my cheeks were hurting more than my legs. I smiled this entire time, I swear. (God, my race recaps are kind of obnoxious and gleeful, huh? BUT IT’S ALL TRUE. I LOVE RUNNING.)

With 800 meters to go, lots of runners started to sprint. I did not.

Then, I saw Ellie and Brian and my friends Laura and Myles cheering together, and I was like, “OK, I’m going to kick it to the finish!” And I tried, but I don’t think anything really happened. In fact, I’m pretty sure I got passed by like 10 women in that final stretch. Go them! Yay! 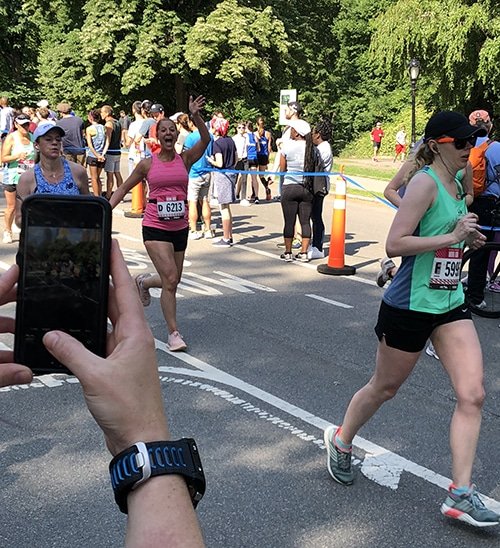 And then I was done! Baby and I finished our fourth race together! (So far we’ve done one 5K, two half marathons, and a 10K.) 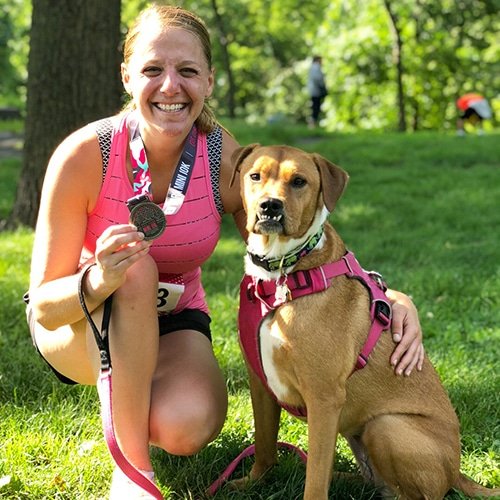 The clock read 58:xx when I finished, and I was genuinely shocked to realize I came in under an hour! My official finish time was 56:37 — a 9:07/mile pace! 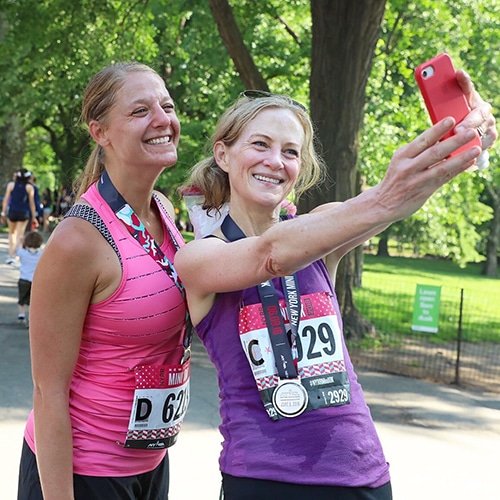 Spotted snapping selfies with running goddess and queen Mary Wittenberg. Mary told me she had her first son the day of the Mini, 17 years ago! She volunteered at the race, then went to the hospital and gave birth!!

The 10K was the perfect distance for me this weekend. It was long enough to feel substantial, but not so long that I felt awful or at any time wanted to give up mentally. Plus, the fact that I was running in my favorite place in the world helped. I was just psyched to be out there, doing what I love.

It was another “best day ever,” and I’m feeling really thankful to have gotten through 20 weeks of pregnancy feeling strong and healthy. I don’t know when or if my running days will run out, so I’m loving every single one I get at this point. 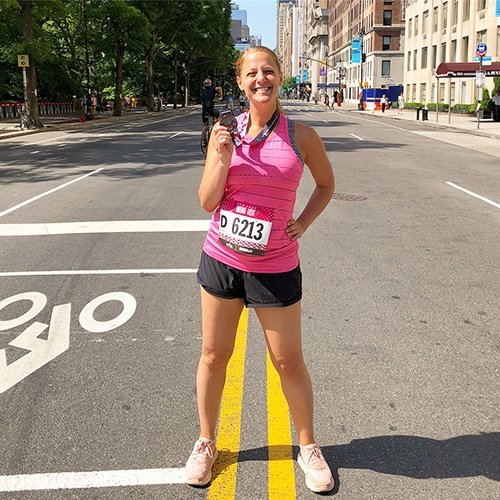 THESE STREETS WILL MAKE YOU FEEL BRAND NEW.

Congratulations to all of this weekend’s runners, racers, spectators, and puppies!

I first met you in the finish chute of the Mini in 2011! Crazy, right?! I had been reading your blog and said hi. The mini is my favorite race!!!

What a happy recap!!!! Love it

Love this recap! Sometimes I get annoyed by the ‘hoorah girl’ stuff too, but then I think we shouldn’t stop doing it, men should start!

Great Race! So happy race day magic kicked in for you!