I ran the New York Road Runners Gridiron 4-Miler in 2011 as the first of my nine races to qualify for the New York City Marathon. I had barely been racing at the time, and I remember loving it. I felt fast, I enjoyed every mile, and I was really into the four-mile distance.

Turns out, five years later, the Gridiron is still a great race, and I’m still really into the four-mile distance. 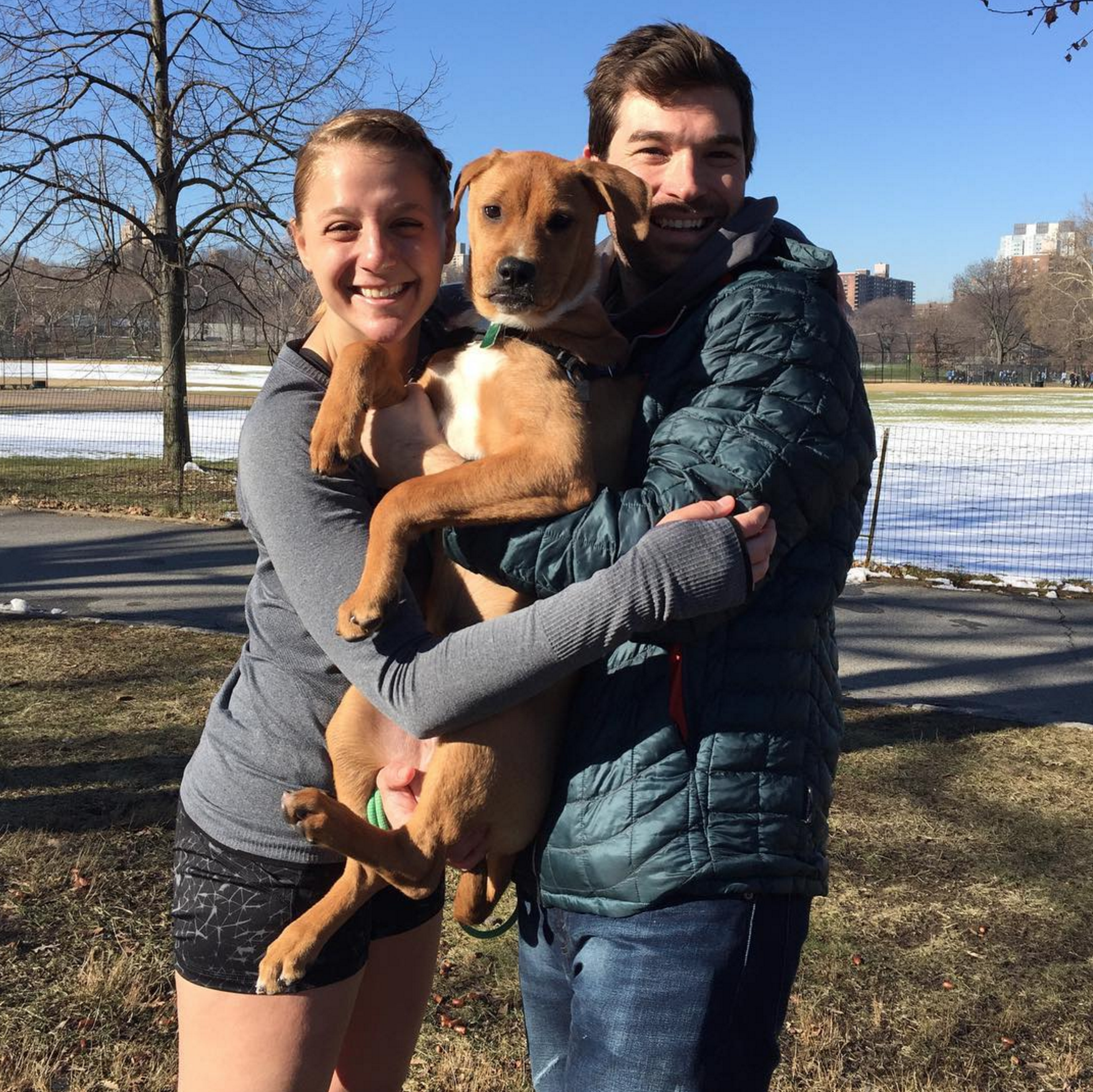 I posted this photo on Facebook and everyone commented, “She’s getting so big!” They were talking about Ellie I THINK.

A bit about the race: 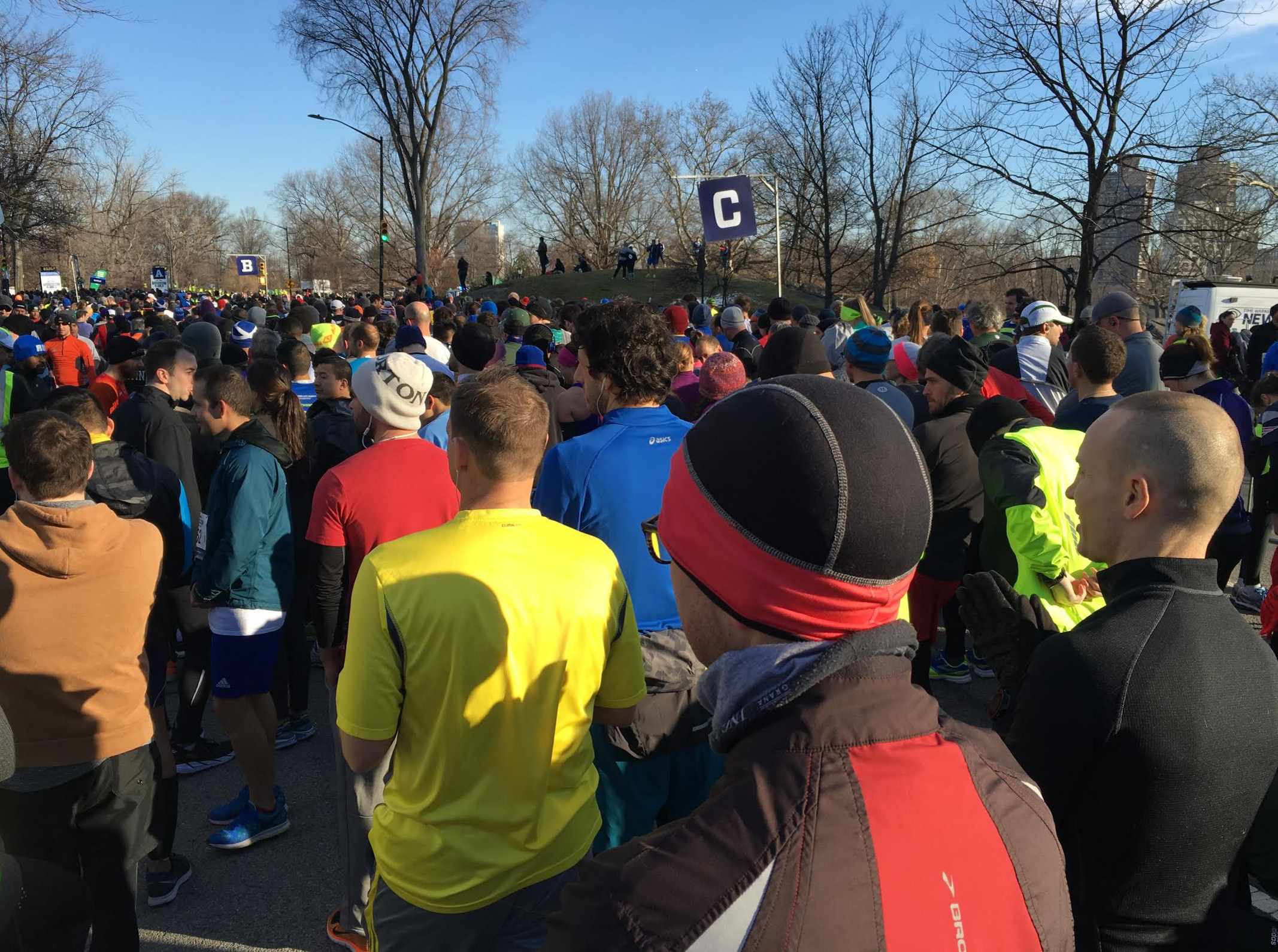 Truly a beautiful day in the neighborhood.

A bit about my pre-race “training”: 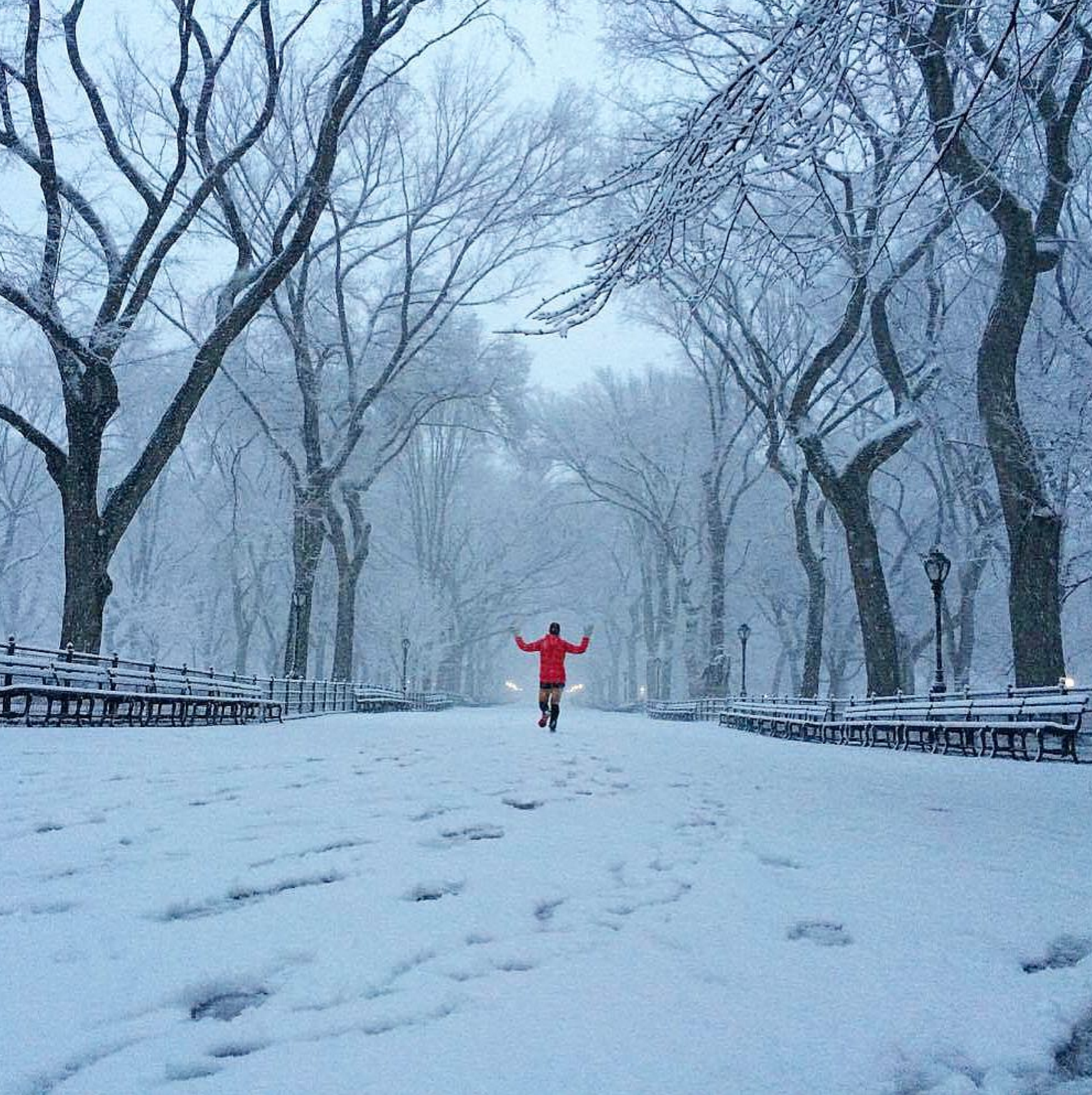 This is my training. 2 legit to quit running. I don’t know.

And with that, my race goals: 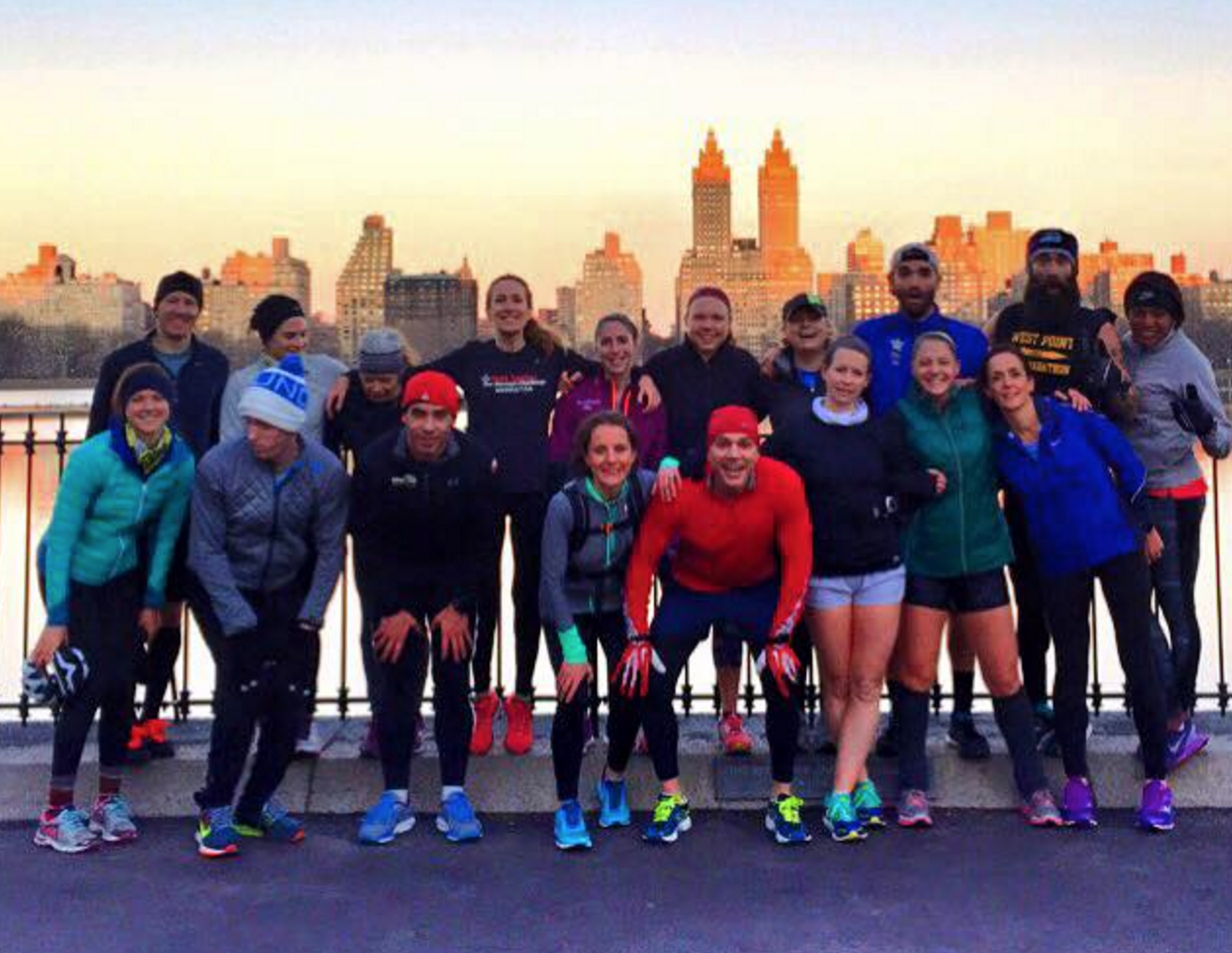 HAVING FUN WITH FRIENDS!

There’s not a whole lot more to say except that I loved racing again, I loved being out in the park on a gorgeous Sunday morning, and I loved running without any data. But let’s see how much I can write about a four-mile run in my backyard… 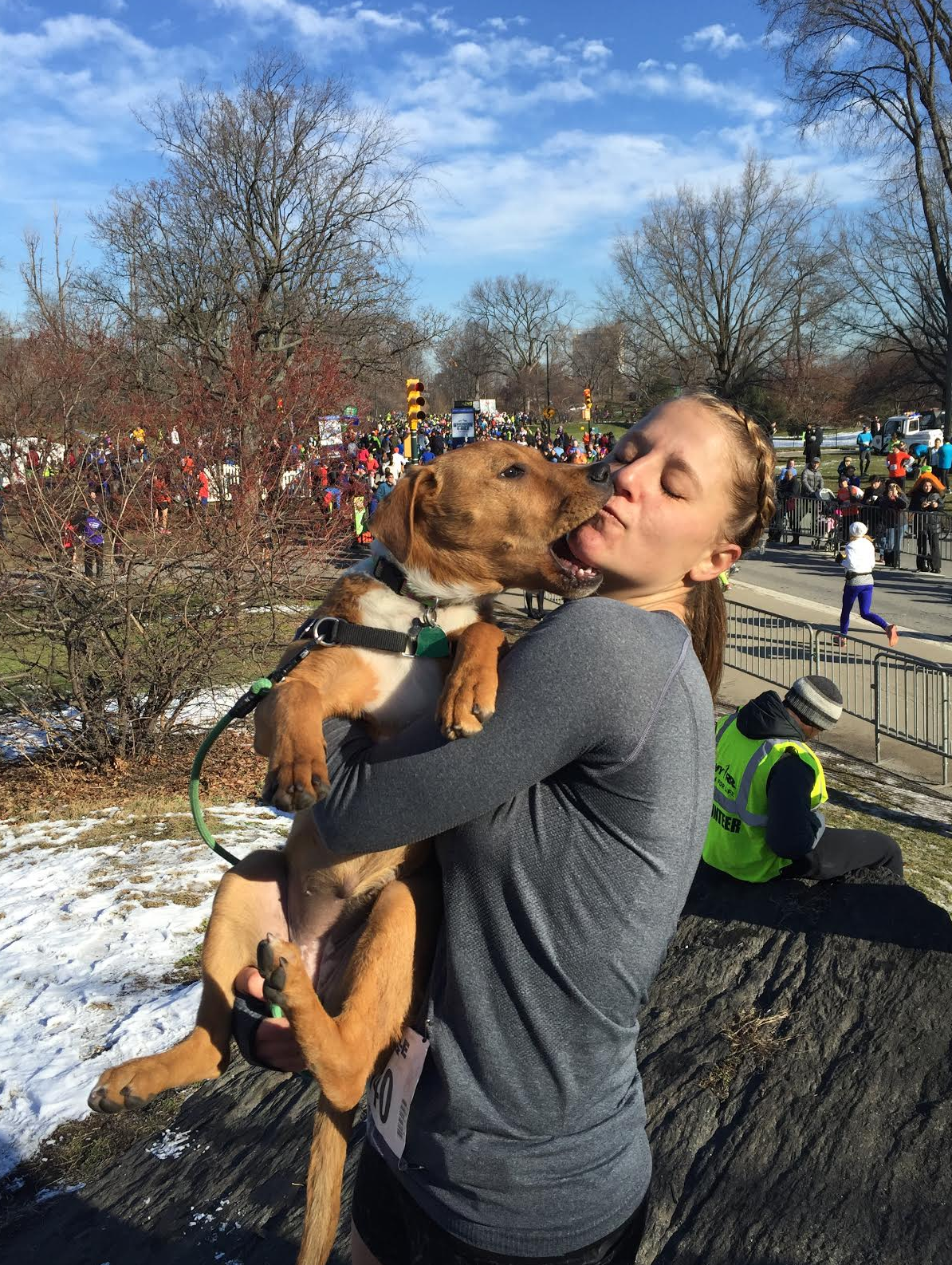 My day started by spending the entire morning going to and from the bathroom (in true Feller style), and trying to remember what I usually eat before a race. I decided a bowl of dry cereal (“Honey Nut Cheerios,” but whatever Whole Foods calls them) and chocolate chips would be my key to success.

I gave Ellie a kiss goodbye (I may have given Brian one, too — our goodbyes for Ellie are far more endearing) and slow-jogged to the start area, where I met up with my November Project teammates. 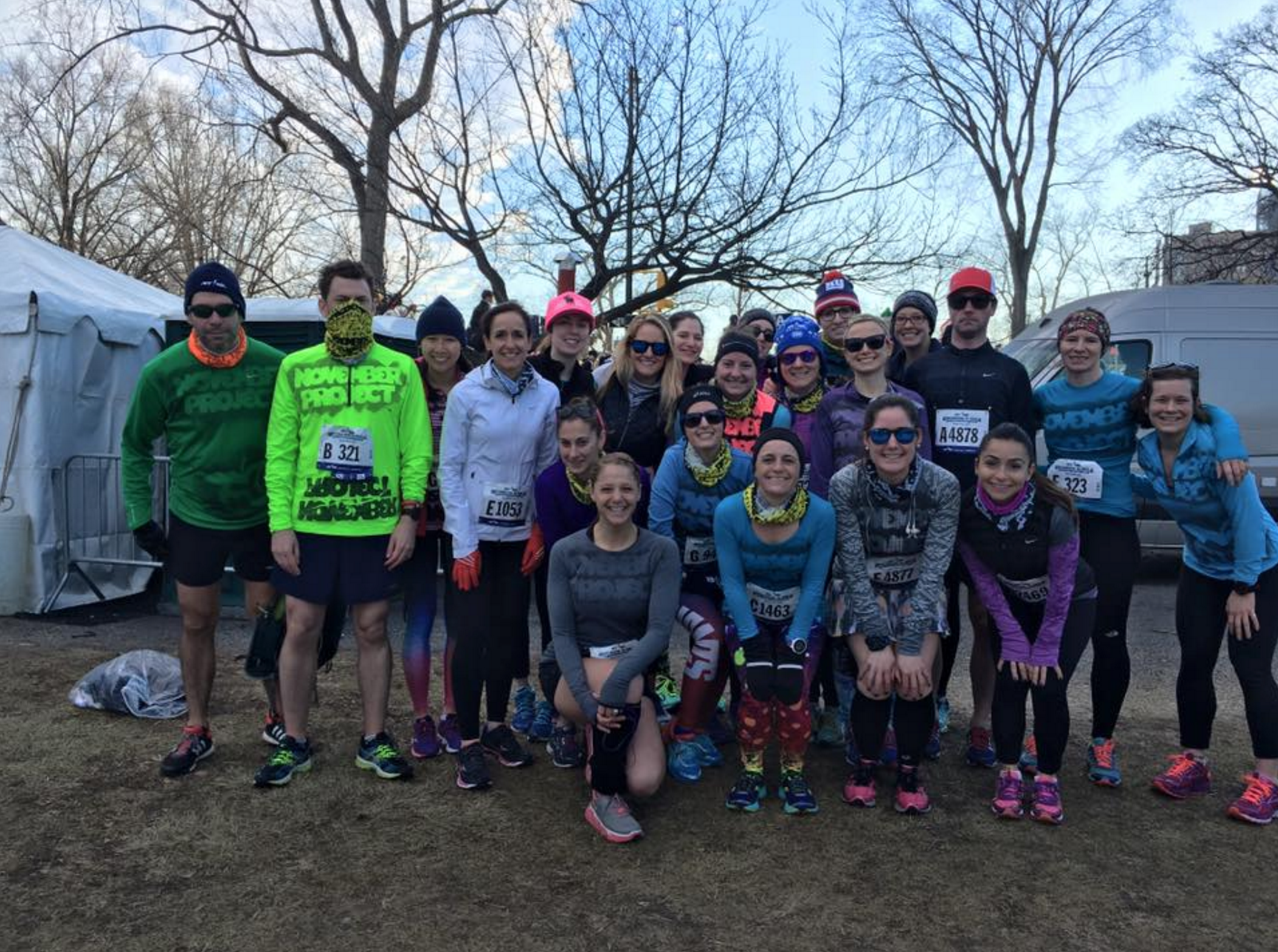 We group photo-ed, scurried into our corrals (I was Corral D), listened to the National Anthem, and took off.

The great thing about no-pressure racing is that I was never nervous. The gun sounded, the race started, and I ran with the pack. 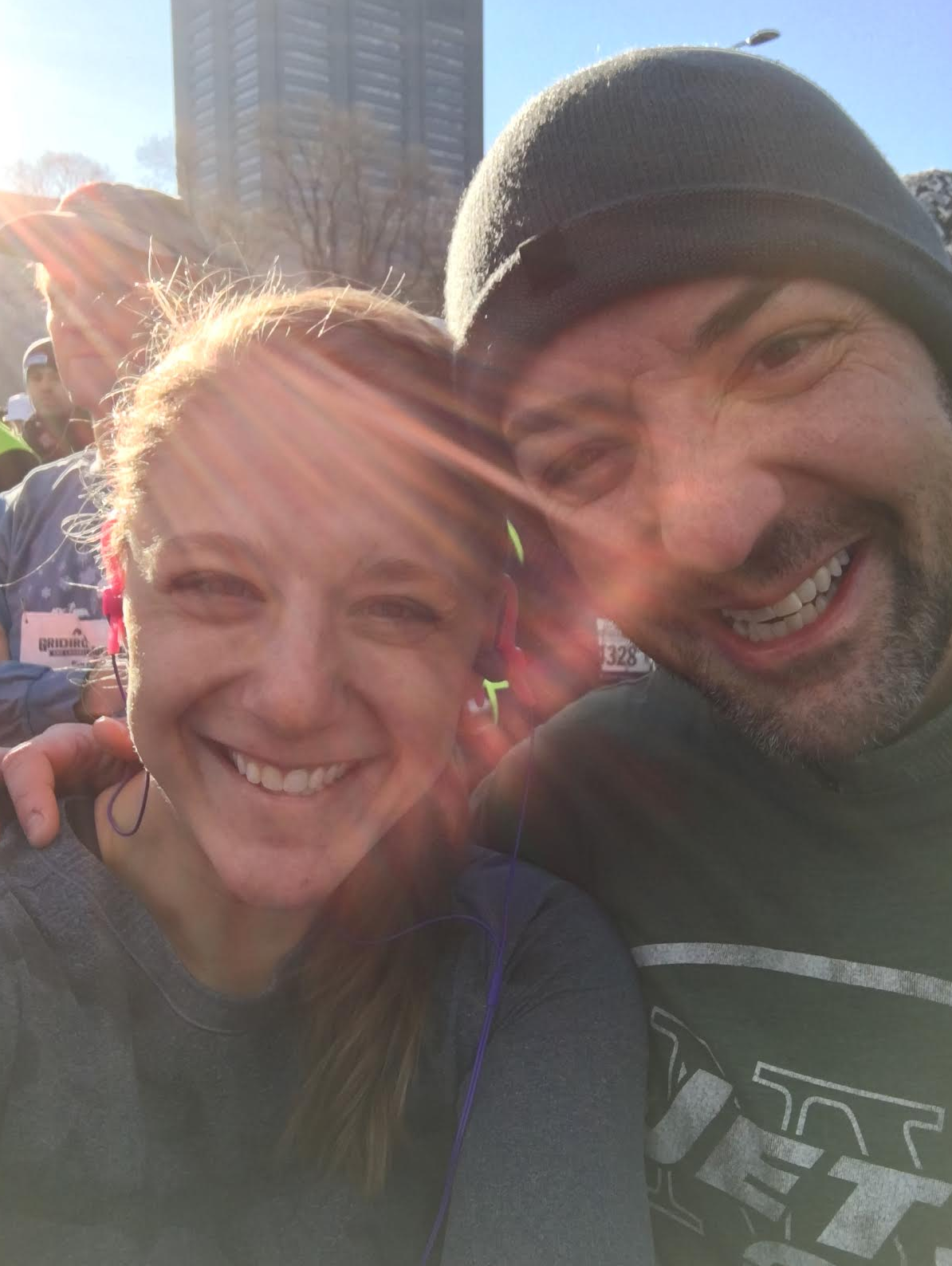 Look, I found a friend in my corral! It’s Gregg!

The rolling hills during the first mile were fine. I don’t really remember the second mile. The Cat Hill incline was barely noticeable. And then, during the fourth mile, I just kept running. WHAT A GREAT RACE RECAP, I KNOW. SO VIVID! SUCH DETAILS!

I felt comfortable the whole time. I never felt like I was gasping for air, but it didn’t quite feel like an easy jog either. I didn’t know if I was running 9:30s or 8-minute-miles, and I kept forgetting to check the clocks at each mile so I could attempt math. It didn’t matter and I didn’t care. (Why haven’t I been running like this all along? Why did I spend so long caught up in all those numbers?)

Within 800m of the finish, I decided I could probably pass the girl with the nice bum I’d been trailing the entire time (hi, girl in a jersey and black shorts and black compression socks — thanks for the pacing and PS you have nice legs!), so I pushed a little harder and it was the first time I really felt like I was working hard and breathing heavily.

Up ahead, I saw Brian and Ellie cheering for me! Brian was yelling, “Ellie look, it’s Mom!” but she didn’t care and I could tell she was focused on a pigeon, squirrel, or piece of trash in the distance.

So I set my laser-like focus, Ellie-style, on the finish line, and just kept running. I heard my November Project teammates cheering and then I crossed the finish line.

Official results. Non-watch running = you have to wait to know your time!

My official finish time was 30:34, which is a 7:39/mile pace. I am mighty happy with that. If I had worn a watch, I never would have run that pace. I would’ve seen sub-8s and backed off, and I would’ve doubted myself, and I would’ve been annoying. Instead, I just got to cruise. I’m completely pro-watchless running now.

Turns out, I was only 10 seconds off my PR, and I beat my previous Gridiron time. And I ran the whole race! I wasn’t even tempted to Snapchat my way up Cat Hill! 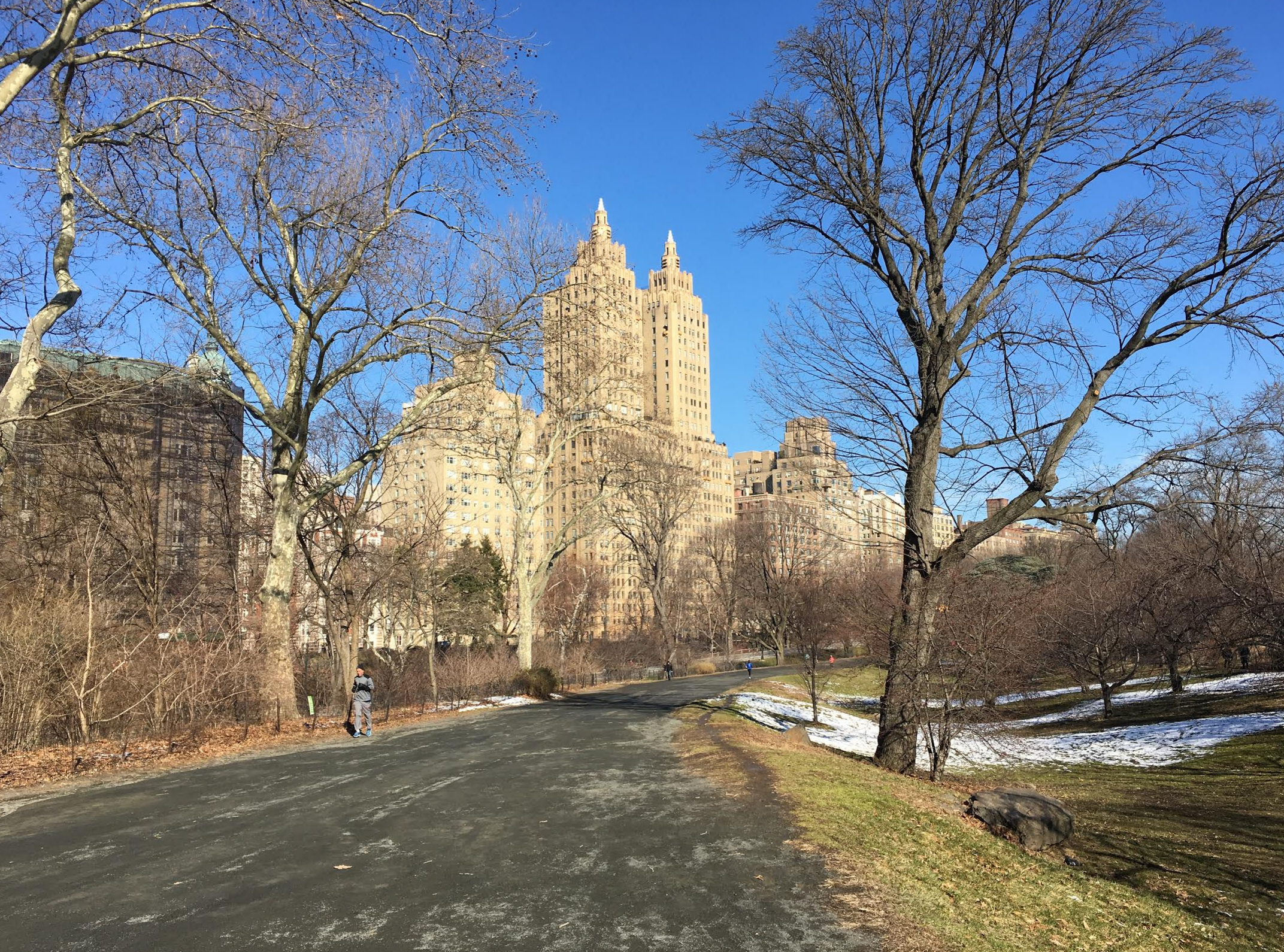 A shot from my jog home. New York, you’re just the best.

My Airbnb Brooklyn Half Marathon Hopes, Dreams, Goals, & Thanks

Congrats on a great come back.

Amazing! That is one sweet come back…and speedier than I am with consistent running lol.
But I do agree on the whole watchless thing. I do try and hit solid workouts 2 of my 5 or 6 runs a week and clock them but other ones I just run what my body feels like. The mental part of seeing a pace and thinking you won’t be able to sustain it I think gets in our way of success. So well done!!!

You’re awesome! I can’t believe how speedy you are without wearing a watch! I have been more consistent with running, and still am not that fast, and definitely wouldn’t be without a watch to push myself. Happy to see you had Brian and Ellie cheering you on. Your little family is adorable. 🙂

A beautiful day in NYC!! I have no idea how fast I run. Some days I feel like I’m flying and some days not so much but I LOVE running and that is all that I care about. So happy you had such a fun race and Ellie is so sweet. Tu must be so excited to run with her. Cocoa is my most favorite running partner!!

Yay for a snap chat less race and a sub 8 pace. (Yeah rhyme intended:)
And how nice to have your two loves at the finish.

SORRY I ignored you. Great job 🙂

Congrats on a great race!! This looked like so much fun! 4 miles is a great distance!

Wow, what an accomplishment!
Please check out my waist runners. I think you would love one 🙂

Im runnning acros America in April. support the cuase and the dream!

Ohhhh, New York really is the best. I love that you get to run in Central Park all.the.time and that you never take it for granted. I wouldn’t either!!!

Wow, what a great race!! I’d be thrilled to see a pace like that! There are a lot of people wearing running shorts in your group. Brrr! But you all look really great 🙂

Crushing it. Ellie was proud.