Planning A Puppy Graduation Party (And Other Life-Changing Plans & Goals)

At the end of puppy class on Sunday, our teacher said, “Bring something kind of weird or different to wear for the next class.”

I immediately perked up. We have just the thing for Ellie to wear! 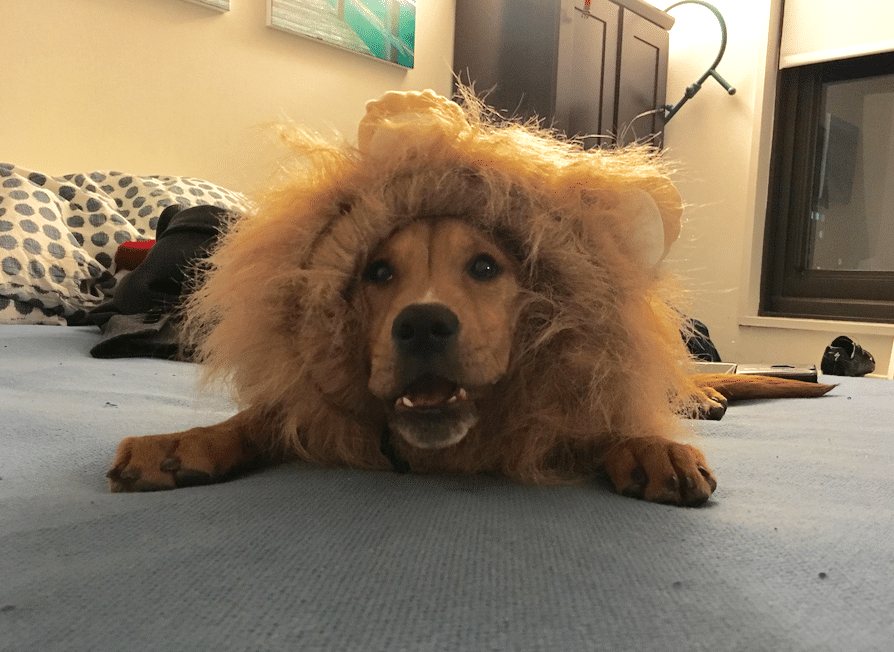 Upon further clarification, apparently the “weird thing to wear” is for the humans, not the dogs, so they can get accustomed to seeing and being around strange things like hats and pansy-printed Limited Too short-overalls and Umbros paired with windbreaker jackets. So less “Ellie as Simba,” more “Ali in a pair of sunglasses and maybe some legwarmers.” 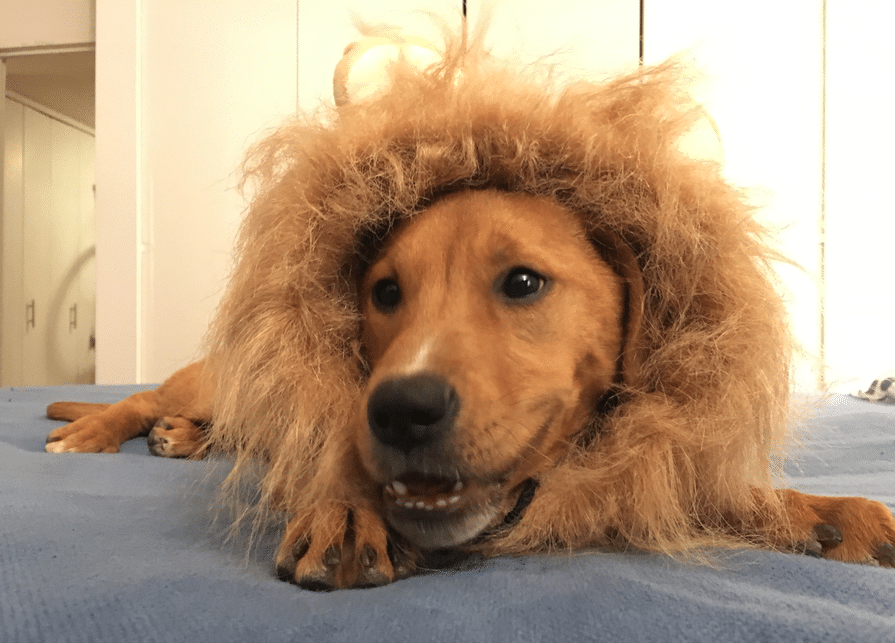 I came home the other night and asked Brian, “Hey, what was in that Amazon box that got delivered?” Brian looks at me, absolutely BEAMING, as he proudly displays our puppy, wearing a lion suit.

We are three weeks into Ellie’s puppy classes, and they have been invaluable. (Actually, not exactly invaluable, since there’s a pretty exact value on them. But that’s not really what this word means in context.) Ellie is doing great in school, and Brian is also doing great. He has a fancy treat pouch and everything, ready to dish out something delicious with every properly-executed command response. 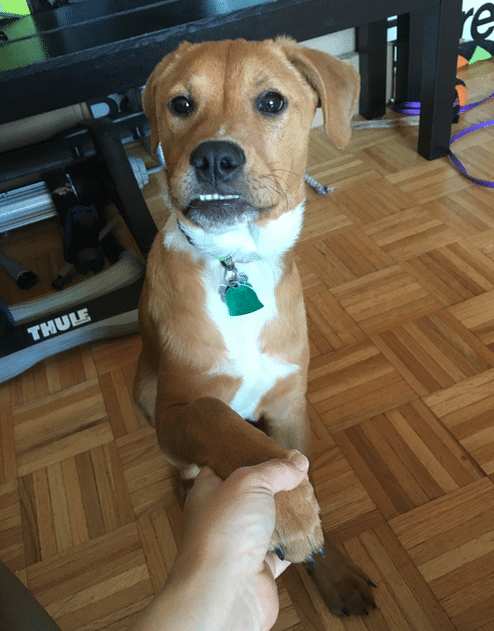 As for me? Well, I have been inspired by a recent episode of Keeping Up with the Kardashians in which Momager Kris threw Kylie (the worst), Kendall (the best), and Khloe (used to be the best, now less cool) a surprise graduation since they were all too famous to go to their respective school ceremonies. (SAME.)

I have officially started planning Ellie’s Puppy Graduation Party. So that’s taking up a pretty big chunk of my time and energy right now, as I’m sure you can understand. 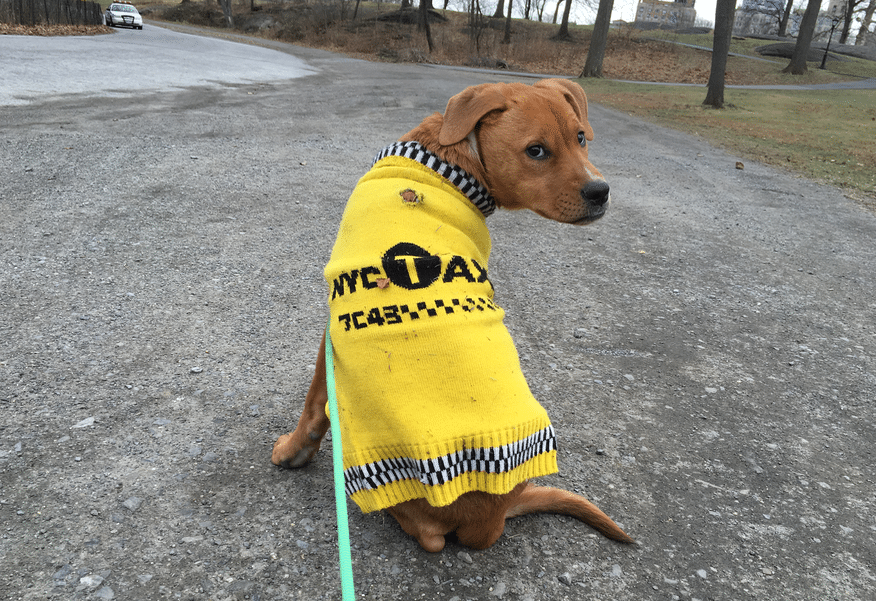 I WOULD NEVER EMBARRASS YOU, ELLIE.

So far, these are my party ideas.

Our apartment is small and is filled with still-unopened wedding gifts and boxes and things, so the fact that my current guest list is at 120 is a problem. I have to probably narrow it down a bit. 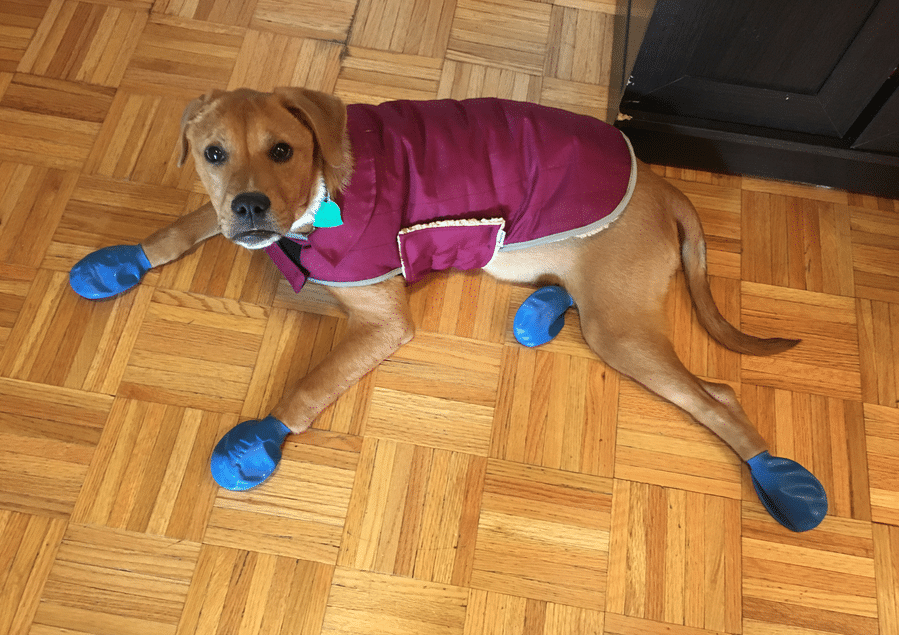 Anyway, what’s new with you?

What’s new with me? 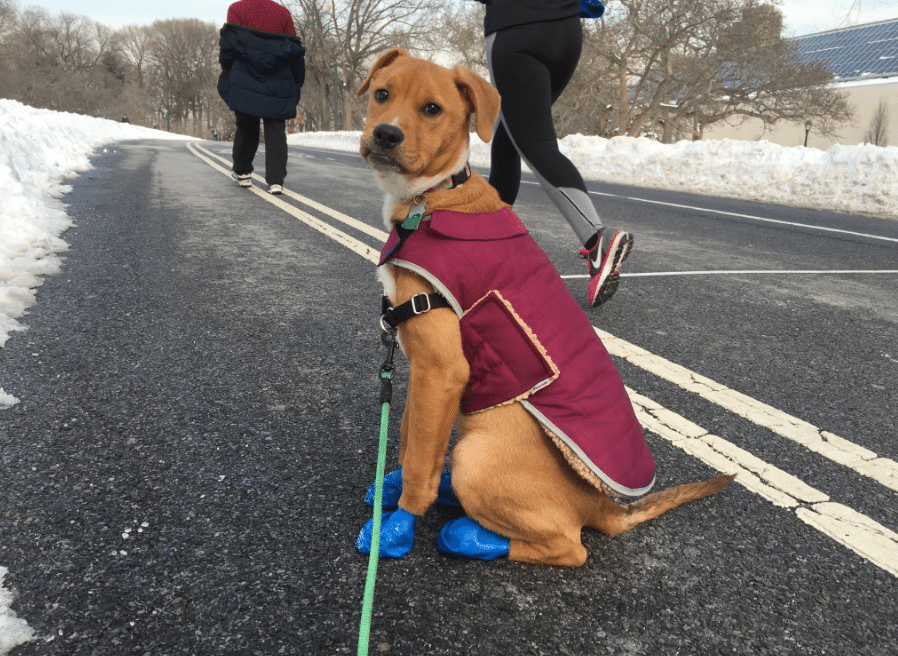 Someone wants to run with me someday!!!

Here are a few more of my current favorite things…

2. I am back on the run! This morning, I re-joined my interval group, and am thrilled to report that I felt no knee pain before, during, or after the run. I purposely didn’t wear a watch because I know better than to torture myself with numbers right now, but running felt amazing and wonderful and it was a beautiful morning and I swear every single runner in NYC was out doing Cat Hill repeats this morning. (We did 5x up Cat Hill, which is around 400m long, then finished with two more 400m efforts at the top of the hill. I also ran there and halfway back so, I don’t know. I did some running. Math!) 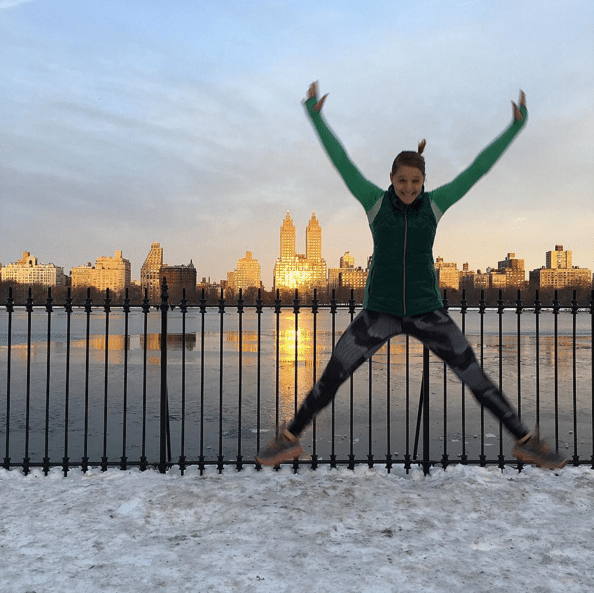 3. So I registered for a race! In thinking optimistically and desperately wanting to get back on the roads, I signed up for the NYRR Gridiron 4-miler in two weeks. 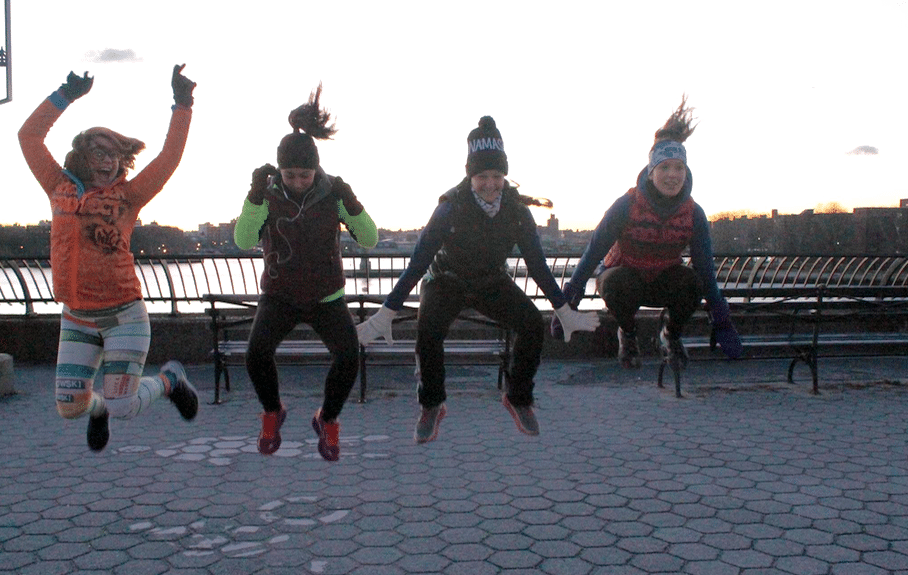 FITNESS IS SO HARD. It never gets easier. Working out is impossible.

I will obviously not be expecting to do anything magical at this race. (LOL at the fact that I ran this race in 2011 and jogged along at a 7:48 pace as part of an 11-mile training run. Why didn’t I appreciate being fast at the time, when running always felt so easy? Also LOL at so many things in that post. Baby Ali.) The goal is to merely finish without any knee pain. And be able to actually run four miles at once. (My how expectations can change over time…) 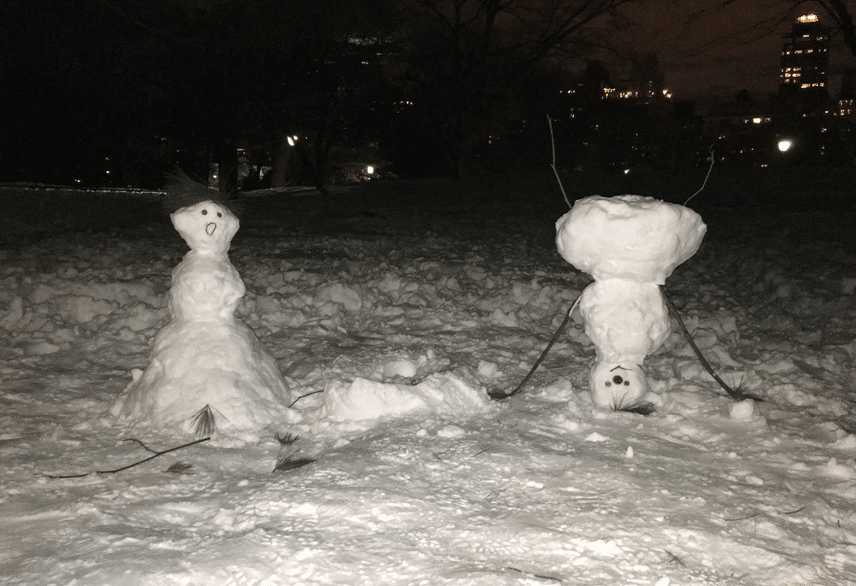 PEOPLE ARE SO CLEVER AND SO FUNNY. And so good with snow! (But are they good with deli meats?)

4. I’ve been having [chocolate chip] pancakes every morning for breakfast. I saw Cassey Ho post on Instagram about how you can make pancakes just by mashing up a banana and two eggs and cooking it like a regular pancake. After a dramatic eye roll because I just didn’t believe that could be true, I decided to try it out since one banana and two eggs (and chocolate chips) were actually the only things in the refrigerator. 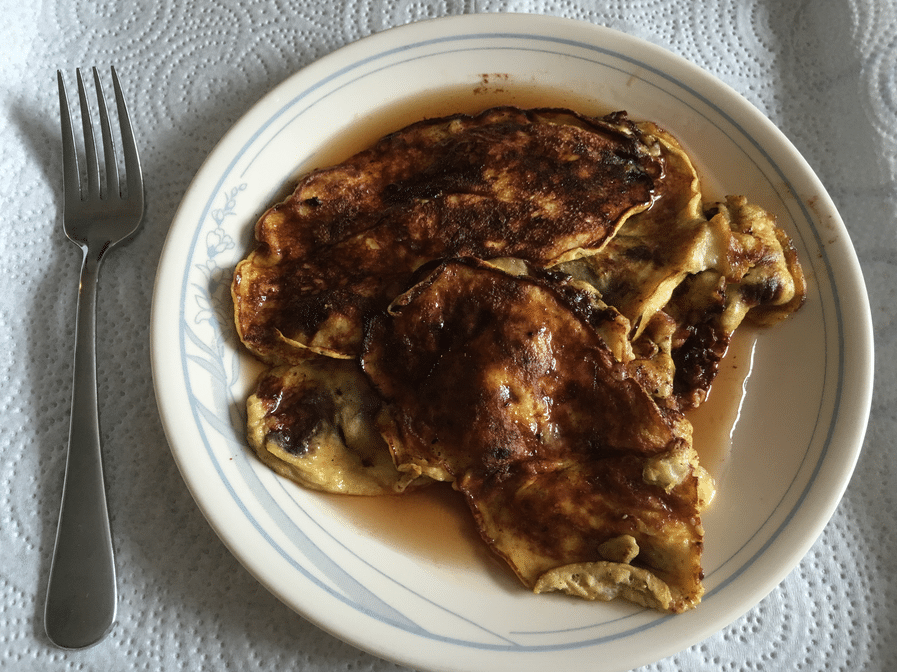 With the right amount of chocolate chips, anything can be delicious!!!

Well, I’ve been eating them daily, so obviously they’re good. The chocolate chips help. And the best part is that Brian thinks they “look so gross,” so I don’t even have to share!

5. Ellie loves the snow. No surprise there. She loves everything. 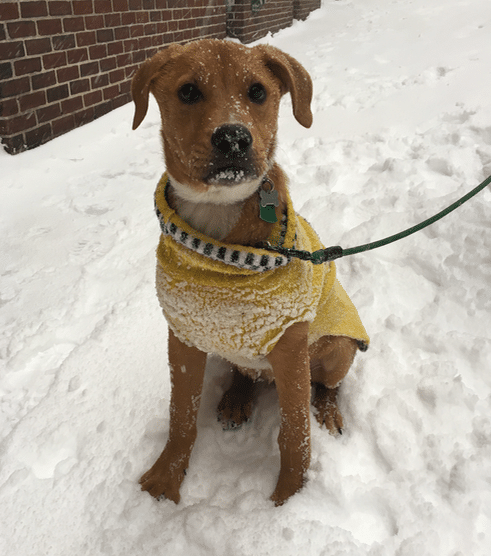 The only thing she once hated was her brush, but now she likes that, too.

We had so much fun taking her out in the blizzard this weekend. 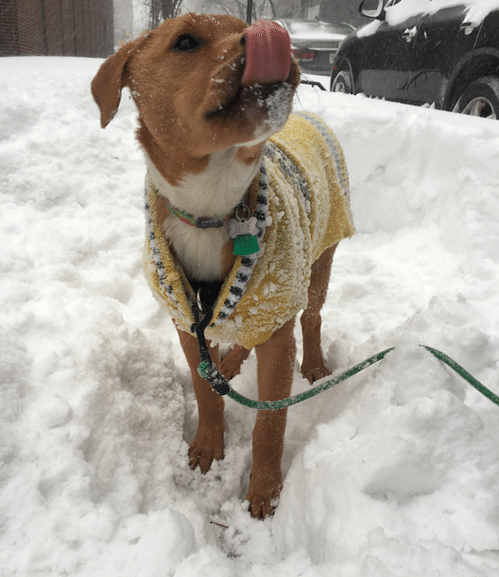 I was so happy walking home from puppy class on Sunday night — through the snow-covered Central Park, under one of the most insane full moons I’ve ever seen — that I just kept obnoxiously screaming, “THIS IS THE BEST NIGHT OF MY LIFE. THIS IS AMAZING. BRIAN LOOK AT THE MET! LOOK AT THE GUGGENHEIM! LOOK AT THOSE TREES! LOOK AT THAT FUNNY SNOWMAN! LOOK AT ELLIE!!! SHE’S PEEING!!!” 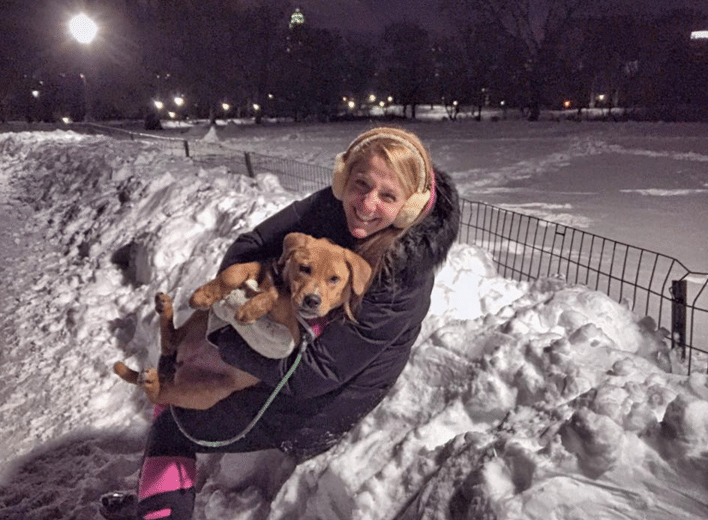 At this point, I fully recognize that there are two camps of people in my life: Those who think Ellie is cute and tolerate all my shit, and those who have blocked me from social and IRL interactions. It’s OK. 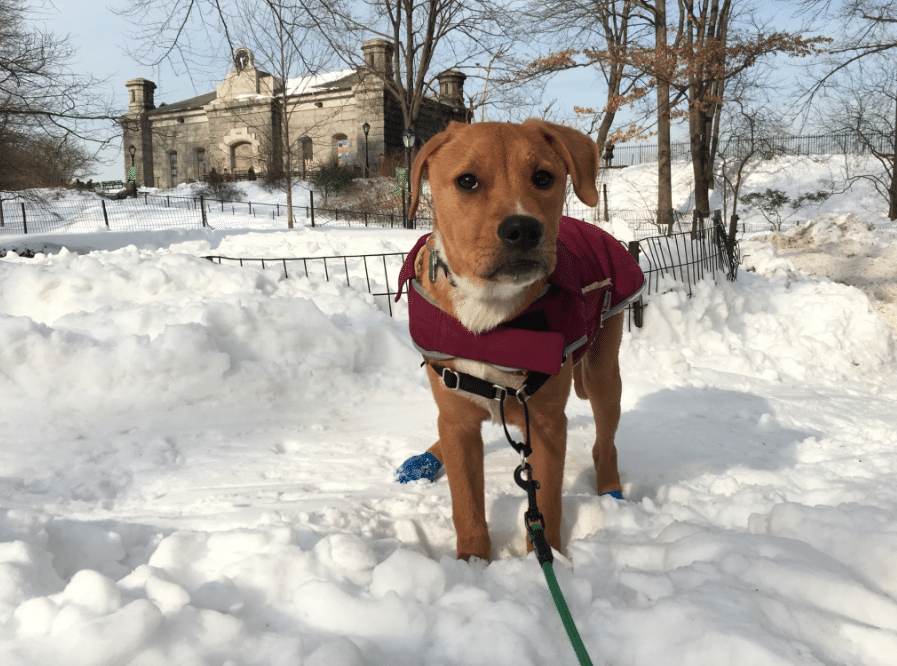 Probs never having kids because I am completely fulfilled now.

6. I am finally banning “fat talk” from my life. I won’t do it anymore. And I won’t entertain it from other people. I have my own body issues to deal with, absolutely, but saying, “Ugh, I’m so fat” or “I feel fat” or anything along those lines won’t be coming out of my mouth anymore.

And I won’t acknowledge it from other people. Sorry, girlfriends. It blows my mind how often my [beautiful and talented] friends bitch about being “so fat.” Enough. Whether it’s seeking a compliment-driven ego boost or it’s a legitimate feeling, I don’t always know. But I’m over it. Let’s talk about something else. (Like do you want to see a picture of my puppy?) 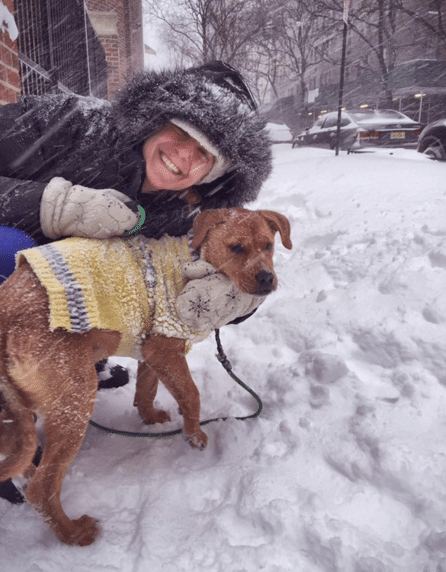 Admittedly my first thought when I saw this photo was, “OMG, my face looks like a MOON.” Time to change the conversation. No more. Ellie doesn’t care if my face is moon-y or frail. 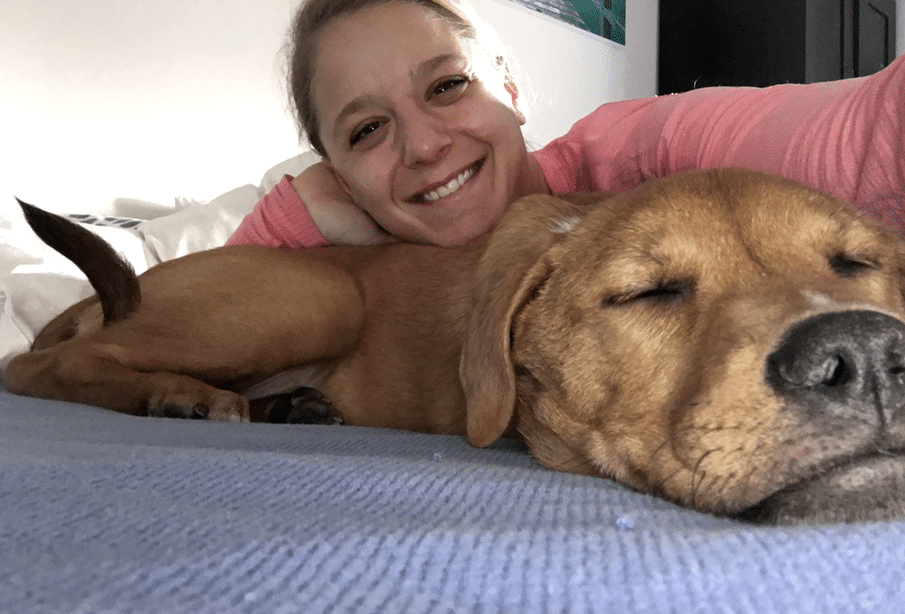 SHOULD MY NEXT POST JUST BE A TON OF PHOTOS OF ELLIE THAT I HAVEN’T SHOWN THE WORLD YET? Circle Y or N. Also RSVP to Ellie’s graduation party. Date and deli meat sculpture TBD.

15 Things That Made Me Happy This Week

Glad you are leaving the “F” word behind (not THAT F word people – really??!! – dirty minds) I just focus on feeling good – screw the body type hang ups.

I did that with negativity last year and it’s the best. Surrounding myself with positivity made for a great year.

YES and YES! Also, I better get an invite to Ellie’s graduation party!

I got a puppy 6 months ago and I totally relate to all of this. Also, I embrace the crazy so keep it coming. My friend, who also reads your blog (HI CARLA), even pointed out that you and I sound exactly the same when we talk about our dogs! I would put a picture of my dog in his puppy school graduation hat in this comment but I don’t know how so I will just say- YAY, Congrats on your soon to be graduation, Ellie! Love, Jax

I love the puppy graduation idea! You may want to head over to carlo’s bakery, they have made a dog cake before that the dogs could eat, it was not made out of turkey though…

I love the puppy booties! too cute, I was wondering how you were going to keep the salt off the feet!

Your ranking of the Kardashian sisters is spot on. Kendall forever. Kylie, please leave. Khole I like you; you’re okay.

My cat and dog would both love a deli meat sculpture if one were available … so they would like to come to Ellie’s party as well.

Your posts always make me smile. I love reading about Ellie and seeing pictures. I can tell she’s already gotten so big! We have a 10-year-old jack russell/rat terrier mix who we tried training but were not successful. We love her anyway.

Yes. Never enough Ellie. But can you include a few videos? That would just take things to the next level. Thanks.

YES. Can I vote more than once?

Just a lil bit of forewarning: Ellie will be a teenager soon and might resent those snow booties you made her wear. Sometimes other dogs can be mean/jealous.

Don’t worry though, the teenage phase passes quickly and then it’s a whole new EVEN MORE WONDERFUL world. Sigh…I so envy you. xoxo

OOH Duncan and I would totally come to her graduation party. Duncan loves deli meat too! What a coincidence. =)
Since my blog is more dog pictures than running pictures these days i’d be a hippocrite to say anything other than….MORE ELLIE PICS! Dogs are so much better than humans.

Always more puppy! Oh, and glad the “F” word is banned and that you are running again.

Yes yes yes to no more fat talk! It just brings everybody down. Let’s focus on talking about everything else wonderful in the world and stop wasting time discussing a bit of fat.

Yes post all the pictures!! And Ellie a d Cocoa do not care at all what size pants we wear so they are the best. I have things to work on body wise but want more positivity and yes to no drama. It’s exhausting and I have no time for it. We saw a story about the snow storm in NYC and they had people at the puppy park. Dogs got to play!!

Awww, what a perfect family you have made for your rescue doggie. Such a pampered pooch. Love it! I always wondered how people in the city, in apartments, had dogs (we live in the suburbs, and have cats). I find it all quite interesting. Keep on with Ellie pictures. I’m all for it!

I am 100% on board with the no fat talk. I am adopting this in my life as well effective immediately!