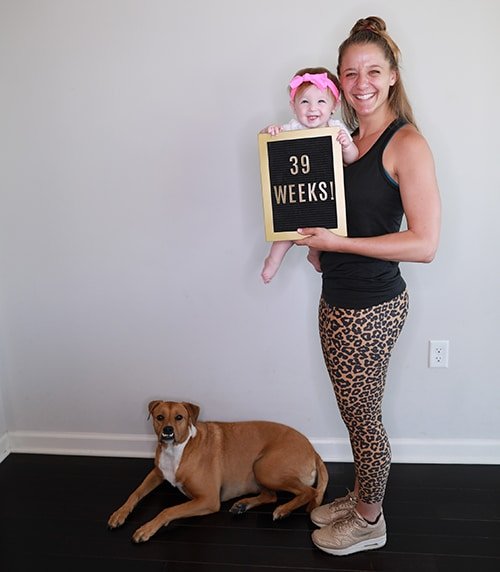 Throwing it back to our old photo spot with our old letter board!

Yesterday felt surprisingly monumental and meaningful to me. I lost track of Annie’s age in weeks once we hit 12 (why were the weeks so easy to count during pregnancy, but so impossible to stay on top of once Annie existed in real life?), but I always had that date on my calendar so I would remember it. It seemed a lifetime away, though.

I think it feels special to me because it’s so rare to get to know someone for his or her entire life. We say we’ve known our childhood friends “our whole lives,” or that we’ve been in each others’ lives “forever.” But that’s rarely actually the case.

That’s part of what feels so special about getting to be Annie’s mom. I was the first person on the planet to know Annie existed, and I’ve had the privilege of being with her every day and night of her life so far. (Maybe I need to get out more, though?) I feel so lucky every single day to get to watch this girl grow, explore, and attempt the kinds of mildly terrifying adventures of a nine-month-old. It’s a massive responsibility, and one that I have grown to love so much. It’s still crazy that I have a child. That I’m a mom. That I am to Annie what my mom is to me. 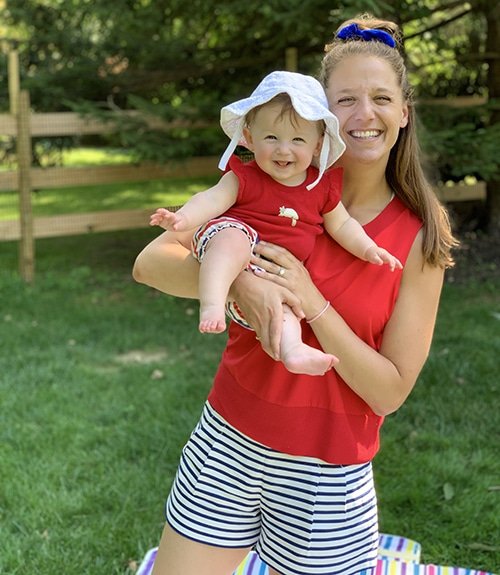 LET’S MATCH EVERY DAY FOR THE REST OF OUR LIVES!!!

And a note: Knowing your child from birth does not define parenthood. Not at all. There are so many wonderful ways to become a parent. In no way is “being the first” or “knowing you forever” a requirement. These were just some feelings I was feeling yesterday.

So much has changed over the past nine months. I think part of why I struggled during the first few months of Annie’s life was because I was trying to fit a newborn into the life I already had. I expected to do the same things at the same times in the same way, just…with a baby. I didn’t give myself space, freedom, and permission to create and embrace a new normal. I tried to force things to look and feel a certain way without starting from scratch. In hindsight, I wish I had shifted my perspective and considered how I could fit into Annie’s new world, instead of trying to squeeze her into mine.

Nine months, though. What a sweet spot. 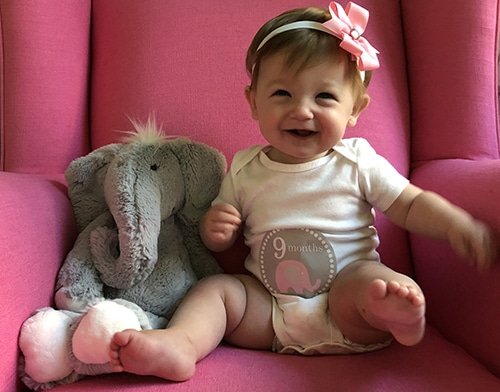 But seriously, where have the past nine months gone?! Holy crap!

Annie is so much fun right now. She’s always had a big personality, but lately it’s all laughs and giggles and squeaks and the occasional “word.” She says lots of “da da da” and “ba ba ba” and “ah-goo” and other noises only other babies understand. She gets excited to mimic and repeat sounds back to Brian and me. If we say “El-lie,” we can see her trying really hard to say it. And she usually comes pretty close!

Much like Tinker Bell, Annie craves applause in order to thrive. She loves clapping her hands, and especially loves when we clap our hands and say, “Yay!” She also randomly started throwing her hands up in the air when we ask, “How big is Annie?” How does she know she is “so big?!” (She’s not, though. She’s still a bit of a peanut for her age, and just moved up to size 3 diapers this week. But she’s happy and healthy and, as the pediatrician always says, “on her own little curve.”) She loves people, especially other babies, and her best friends are Ellie and the Roomba vacuum. She gets very excited when the vacuum turns on, and will sit and watch it, completely transfixed, for as long as we’ll let her. 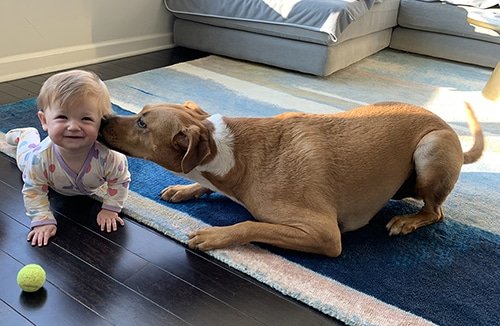 BEST FRIENDS. Ugh, I love them together. (It’s not always perfect! Annie is on the move QUICKLY these days, and Ellie sometimes wants her space. But pretty good!)

Last month, Annie transitioned over to formula. (I was exclusively pumping for her, which I stopped doing when she was around 5.5 months old. The freezer stash I had saved got her to eight months.) She had reflux when she was on breast milk and never seemed to love it, but girlfriend loves her formula! I am so happy she loves it and that feeding her is no longer a struggle!

We started giving Annie solid foods at six months, but now she is really eating, not just playing with her food. She gets four bottles of formula throughout the day, and eats solids at breakfast and dinner, and sometimes gets a midday snack. She loves her morning “smoothie” (usually some combination of fruits and veggies, which she eats using this cool spoon), loves string cheese (and she usually hands a few strings off to Ellie, so everybody wins), and loves hummus. Hummus is her favorite food. Mealtime is very messy, as everyone warned us it would be. She also loves these peanut butter packets.

Annie is a great sleeper, which is really wonderful. She usually goes to bed around 7 PM and will sleep until 6:30 AM. She’s still on three naps per day, but she’ll probably transition to two fairly soon. (But I don’t like change!)

Annie had her first swim lesson, which she hated — she loves the water but was terrified of the instructor. Poor guy! He tried so hard to be her friend, but she was just not having it! She loves the swings, and she went on the slide with me for the first time earlier this week. She is constantly on the move, army crawling, trying to stand, and easily going from being on her stomach to sitting up. It’s crazy when I get her from her crib in the morning and she’s just sitting there on her butt, waiting and smiling.

Look at all this fun!

She loves music and dancing, and isn’t content to just sit anymore. She wants to stand, wants to jump, wants to go. She also loves being around other babies and kids, which is so cute. She reaches out to touch them and laugh and look on in awe. Since she’s not in daycare yet, it’s fun to get her around other kids as much as possible.

Oh, and still no teeth! My mom jokes that I’ve insisted Annie is teething since she was like a month old. (If she is ever even remotely fussy, I say, “She’s probably teething.”) But no signs of anything really poking through just yet! 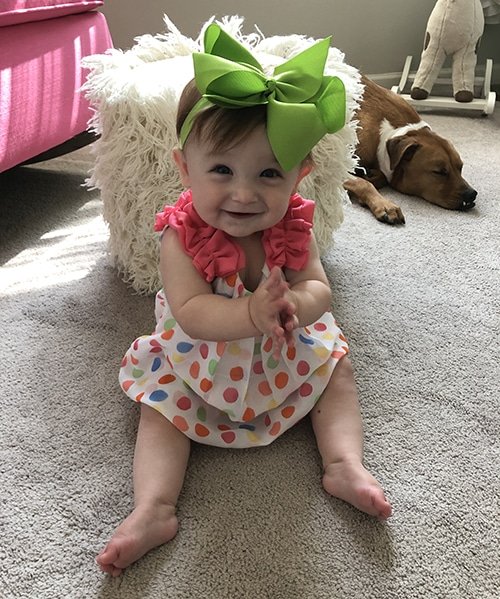 She picked this bow!

Annie’s dislikes include being on her changing table — changing her diaper is an adventure, because she just wants to roll over, constantly — and having her face wiped when she’s done eating. I am the worst, I know. Mean Mommy.

These are a few of Annie’s favorite things right now: 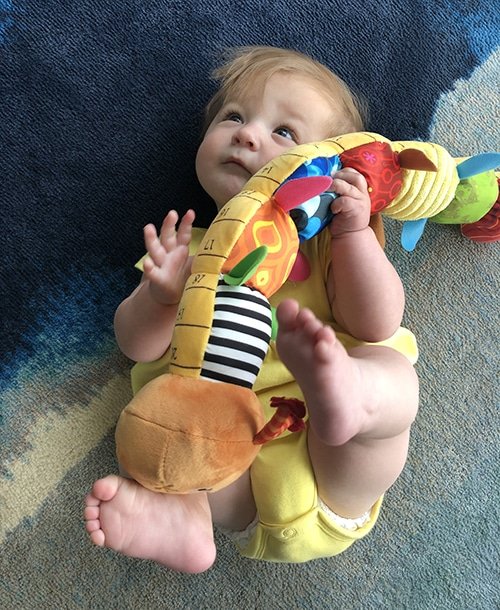 Playing with her worm!

I say this every month, but I really do want to freeze time right where we are. It’s so much fun — but I know we’ve got some really good stuff up ahead!

Thank you for being a part of our extended family. I always swore I would stop blogging and sharing once I had kids but here we are. Still kind of blogging. Still over-sharing. And more grateful than ever for all the kind people in this world who have supported me and my family throughout all of it.

Life With a Newborn: One Month!

Life With a Newborn: Month Two
Back to Blog
Leave a Comment
Posted in Baby and tagged annie, baby-

4 Responses to "9 Months of Annie"

My youngest is 15 months and I too started blaming teething every time she was fussy, starting at about three months. She didn’t cut a teeth until nine months! And once that was started I remembered how much more cranky actual teething can be!

Love this! Your family is ridiculously adorable 😍 So many smiles!

PSA, there is a pretty serious risk to going down slides with babies/toddlers. The momentum of your body weight has the potential to break the leg of your baby if they happen to stick their foot out and touch it to the slide in any way (a quick google search has some nasty photos/articles). Apparently a lot of people know this but just don’t share frequently including a colleague of mine whose own toddler broke a leg this way and told me after it happened to us. I wish someone had stopped and told us this before we ended up in the emergency room ourselves. I hope you have an amazing next 9 months and pass this info on to anyone you see!

9 months?!? Wow time does fly. She sounds amazing. The transition to motherhood was rough for me too. I could relate to a lot of your reflections on that transition.