Only took me two weeks to get this recap up. In my defense, I wrote it the day after the race! Just got realllllly lazy when it came to hitting that “publish” button! But if you’re interested in a 13.1-mile run I did a bit ago, here you go! 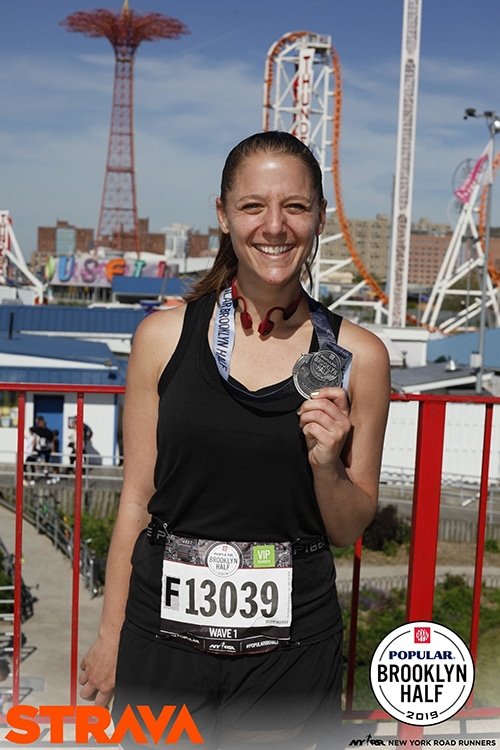 I ran the Popular Brooklyn Half! (Popular is a bank. Did you know that? It’s the sponsor of the race. It’s not just called that because it’s so popular. Which it is. DOUBLE MEANING!) My inclination is to say, “It was so fun!” And that’s true! But if I actually stop and think about it, there were definitely some less fun times along the way to Coney Island.

The race went exactly as I expected it would. I registered on a whim and didn’t really train. I’ve been going to Orangetheory regularly, so I’m feeling relatively strong and fit at seven months postpartum. But between the NYC Half and Brooklyn, I didn’t do many — OK, any — long runs outside.

This is the part where I break to say, and you know this, be smart when it comes to running and racing! No, I didn’t train specifically for this race. But I know my body and what it’s capable of. I knew I could run 13.1 miles, and that my body would be fine. Would it feel OMG amazing? Was I going to be able to, or want to, all-out race it? Of course not! But I struggle with the idea of being an “influencer” or someone with a bit of an audience because I’d hate to think that someone saw that I ran a half marathon on a whim and went out and did the same thing, only to end up injured, aching, or otherwise unwell. I know my body. You know yours! Cool? Cool! 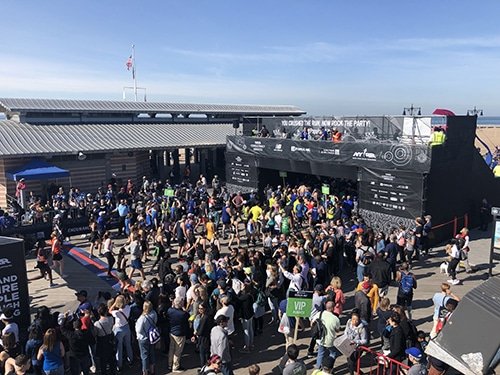 The finish! YOU DID IT!

I went to Brooklyn (with Annie!) the Thursday before the race to pick up my race bib, and I thought about how my 13.1-mile run on Saturday would go. My stomach had been a bit iffy all week (I swear, every year, my stomach is “iffy” the week of this race!), so I figured there would be a bathroom stop at some point along the way. I knew I’d go out too fast, and I knew I would tell myself it was fine. I love the first three miles of this race, and every time I run Brooklyn, I fly out of the gates because I’m so excited. I knew I would feel lost in Prospect Park, as I always do, and I knew I’d spend the entire loop of the park dreading “the hill.” I also knew, based on past runs in Prospect Park, that once I got to said hill, I’d remember that it isn’t actually that bad. I figured the “flat” or “net downhill” stretch along Ocean Parkway would feel long, and that it wouldn’t feel “flat” or “net downhill” at all. I knew by mile 10 I’d probably be kind of over it. I knew I’d be so happy to finish! And, based on the weather, I knew it would be a little hot. 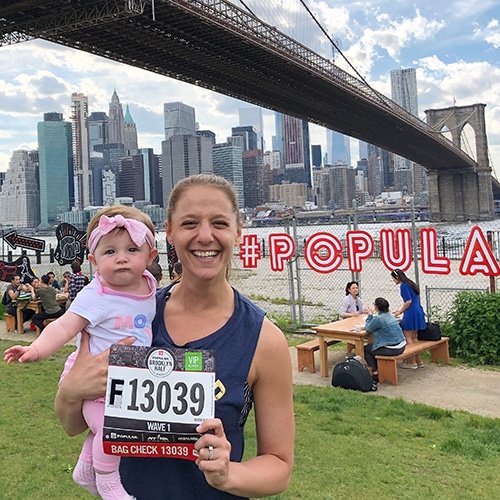 This is the best expo. I’m not an expo person, but I do love this one. (And it was so easy to get to from NJ! Hooray for ferry boats!)

And yeah. A+ predictions! Should I keep going? Because that’s pretty much exactly how it all played out.

All the amazing people I got to see at the start and finish! I just love the New York Road Runners staff and all the happy volunteers, and am so grateful to live where we have access to such high-quality races so often. I got to see my friends, I got to see a whole bunch of Ali on the Run Show guests (Sarah Cummings! Leigh Anne Sharek! Carly Gill! Christine Burke! Meb!), and everyone seemed happy and ready to race. 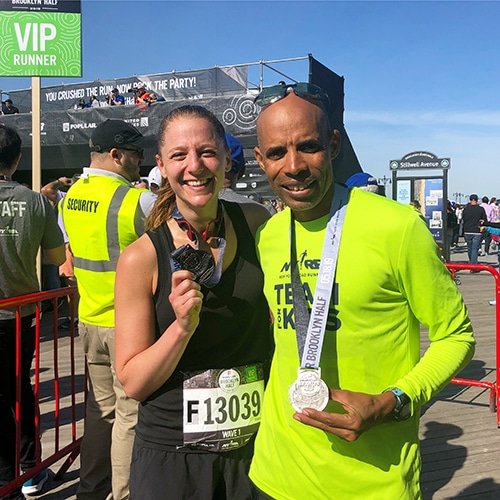 I asked Meb if he would pace me to a 5K PR, and he said sure and to just pick a race. And I feel like…I should do that.

The first three miles. As always! I love the start of this course. Out-and-backs are my favorite because I love seeing all the other runners. I try to spot as many familiar faces as I can, and I usually get kind of dizzy, but it’s fine. Those first three miles always fly by. 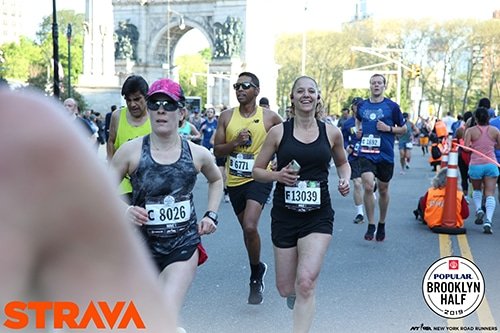 So happy two miles in!

That Prospect Park hill. It’s really not that bad. (I say this every. time.)

The finish! I love the Brooklyn Half finish on the boardwalk in Coney Island. It’s fun, it’s summer-y, it’s lined with spectators, it’s got the beach and ocean on the left, and food, drink, and rides on the right and up ahead. It’s awesomely New Yorky.

My finish time! I ended up crossing the line in 1:55:24. (That’s an 8:49 average pace per mile.) Not bad considering a lack of long runs, a significant bathroom stop, and a hobbly last mile. (We’ll get to that.) 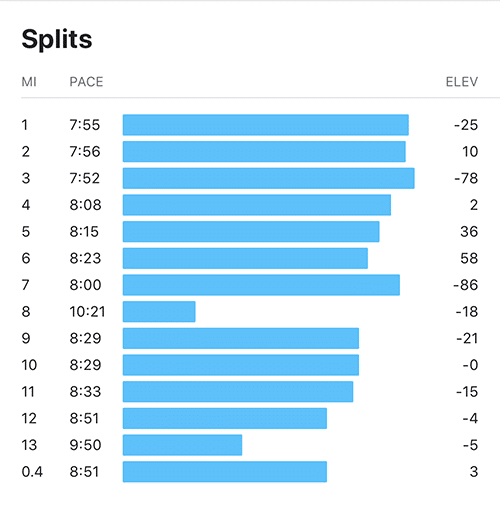 I don’t run with a watch anymore, but I ran the Strava app on my phone, and this is what it said. (Bathroom stop at mile 8. Clearly.) #POSITIVESPLITSFORPOSITIVEPEOPLE

Letting Ellie run around on the beach and Annie dipping her toes in the sand! I loved our fun family time at Coney Island post-race. 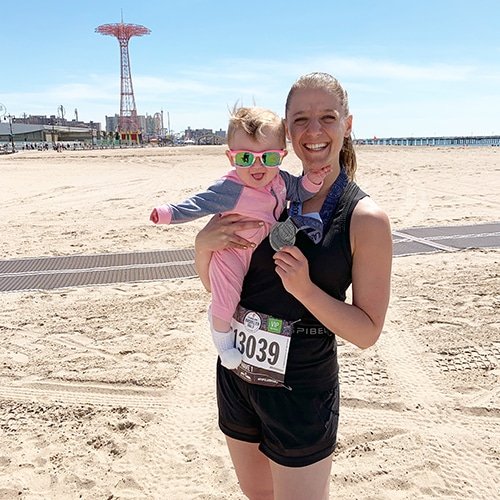 My mental game was weak right from the start. I was never worried or stressed about the actual running, but I was a head case about my stomach. The last time I ran this race, in 2017, I was in the early stages of a Crohn’s flare, and I made something like eight Porta Potty stops between the start and Coney Island. I had read my previous Brooklyn Half race recaps the night before, thinking they might hype me up and get me excited, but instead, they all reminded me of how many times I’ve had to make bathroom stops during this race over the years! So for the first half of the race, I could.not. stop thinking about my stomach — even though it was fine! That’s the thing about having Crohn’s. I was constantly waiting for it to hit, for it to kick in, for something to feel urgent. Finally, around mile six in Prospect Park, I made my move. I dashed into a Porta Potty and gave myself some time in there (I’m no 13-second Shalane Flanagan), and once I exited, I felt so much better. I didn’t have to make any more bathroom stops during the race. Yay! I wish I hadn’t cemented the idea of “Brooklyn Half = bathroom stops” into my own brain, and I tried really hard to get out of my own head. It took a while, but eventually I was good. Phew.

It was pretty hot. I made it to mile two before I realized I was sweaty. That’s par for the Brooklyn Half course — it’s either so hot or so rainy. This was a hot year. I wasn’t trying to do anything magical out there, so it was fine, but Ocean Parkway was super sunny and very hot. I was taking entire cups of water and throwing them on my face, down my chest, and down my back. That felt amazing. Highly recommend. 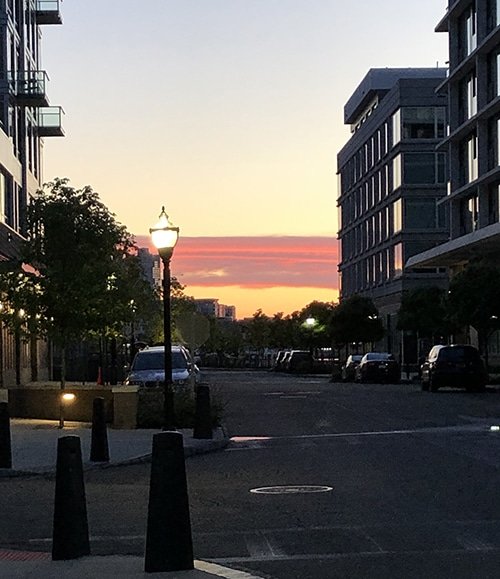 That cramp at mile 12. I hit the mile 12 marker and BAM! Side stitch! I had to come to a dead stop and put my hand in the air and get my butt to the side of the race course as quickly as possible. (Fortunately at this point, the race wasn’t crowded. No collisions, phew!) I couldn’t keep running or even walking. I had to just stop and put my hands on my head and try to breathe. Eventually, I walked slowly, and then tried to jog, but kept having to stop. It was so painful. I ended up having to walk most of mile 12, which was such a bummer, because I was actually feeling pretty decent up until that point! I had slowed down, sure, but I felt fine and happy. That cramp, though. I was able to jog the very last bit of the race and toward the finish on the boardwalk, but it hurt!

I carried my phone the entire time. This was so stupid. I wore my SPIBelt for the sole purpose of stashing my phone, but instead, I started running with it in my hand and just…kept holding it. It annoyed me the entire time. I would switch from one hand to the other, but I was still getting annoyed with it. Why didn’t I put it in my belt mid-race? GREAT QUESTION. 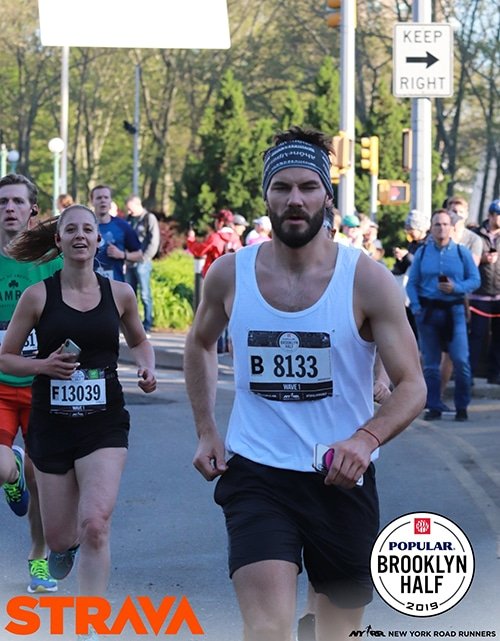 PUT YOUR PHONE AWAY, ALISON. WHAT ARE YOU DOING?

The drive home. It took us almost three hours to get from Coney Island to Weehawken, NJ, by way of Staten Island. Apparently there was a BTS concert in Newark and we spent a lot of time in a lot of traffic. (Shout-out to Annie for napping for a good chunk of it! And shout-out to Brian for driving!)

I ran in shorts for the first time in a long time. I’ve always been all about the short-shorts, but I retired my collection when I was a few weeks into my pregnancy and hadn’t looked back. But with temperatures getting into the seventies, I figured leggings would be a stupid choice. So I brought the shorts out of retirement, and they were really comfortable during the race, but as soon as I got home and stepped into the shower, I remembered…ouch. Not the worst chafing of my life, but return of the ouch.

All in all, it was another good, grateful day on the run. By the numbers, it went better than I expected. Part of me is eager to train for and race a half marathon. If I can run a 1:52 and a 1:55 without a ton of training, I wonder how I’d do properly prepared. But I also feel like I can’t commit to a training plan right now. And I’ll be honest: I’m not motivated to go out and do hard workouts and long runs solo. I’m craving a running group or running buddies, but my workout schedule is all over the place right now. 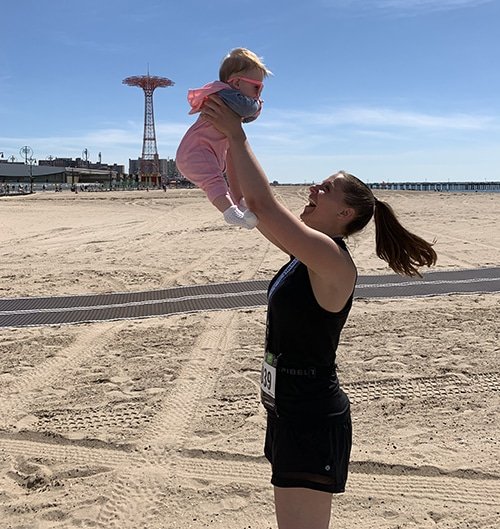 I’m too nervous to actually THROW her in the air. So I do this.

Part of me wants a goal, a plan, a few hard running workouts. But another part of me knows I’m still very much in the ever-changing postpartum period, and there’s no need to put any potential added stress or pressure on myself unless it’s for something I really want.

WHAT’S NEXT: The NYRR Mini 10K, maybe? I love that race, but the pro field looks amazing so maybe I just want to spectate? TBD. I also have an entry for this year’s TCS New York City Marathon… Do I go for it? I haven’t decided.

3 Responses to "Popular Brooklyn Half 2019 Recap"

I love this!! You are crushing it.

Yay!! I love a good race recap, and summer always give me a few surprising chaffing situations, even in my regular clothes. I can’t wait to see if/when you decide to truly train for a race. I agree that if you know your body, you can go out and see what a course has to offer.

Every single time I’ve run it, I always think MAN the first few miles are unexpectedly sucky…and then I look down and have also gone out way too fast.