I’ll be honest, Week 37 felt long! Good, fine, great, wonderful, but so much seemed to happen and change within the course of the week. It started super strong, but I swear at some point, baby gained like 12 pounds in there and my stomach grew a lot, and by the end of the week I was feeling big and roly poly and awkward. I keep bumping into stuff!

Also (and this photo doesn’t reflect it because it’s from before it happened), I’m like 92% sure baby dropped yesterday. My belly suddenly looks lower and different and I’m peeing a lot more! 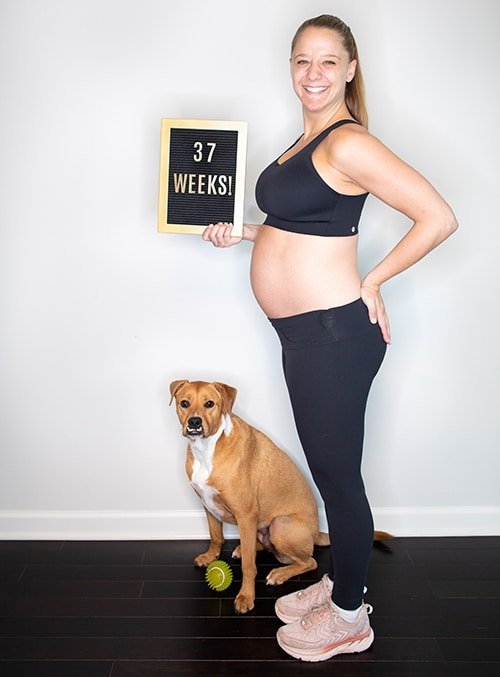 Should probably go up another sports bra size, but…meh.

At this week’s midwife appointment, they said baby is still looking a bit small. And I KNOW. I KNOW. I KNOW, EVERYONE, I KNOW that these are just estimates. I know that like 12 million people were also told their babies were “measuring small” and then gave birth to teenagers. I know that, and my team of doctors also always uses the word “estimate.” (Every time I so much as mention this baby’s potential size, I get a whole lot of feedback saying “it’s just an estimate” and “it’s not accurate” and “my baby was measuring small but was born in sixth grade,” so trust me, I know. I know I know I know!) 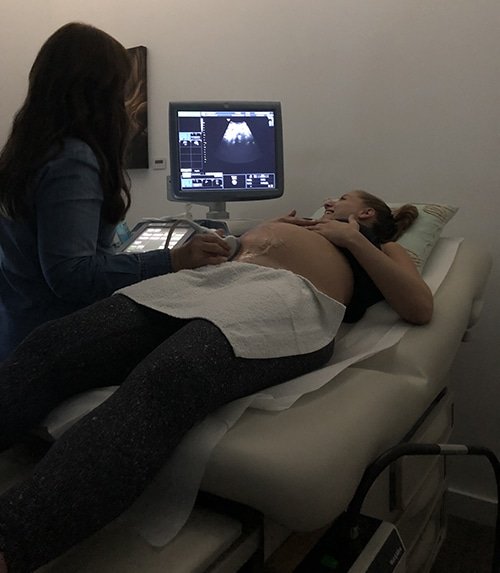 The best part of every appointment! I never get tired of seeing baby on the big (little) screen.

So when I say “weight” or “size,” at least in this context, it’s in relative terms. Whether she’s measuring small or not, we’re looking at the rate of change from week to week, appointment to appointment.

And regardless of what she’s actually weighing, she hasn’t gained a ton of estimated weight between the last few appointments. So we’re keeping an eye on that. Her vitals all look good, and Midwife Kristin had me do a non-stress test, which basically meant I got to lay down and be monitored in “the zen room” for 15 minutes. I loved it. I want to do that every day! And I passed the test! I’m not stressed! (“Actually, it just means baby isn’t stressed,” Kristin corrected me when I was a little too proud about my passing grade.) 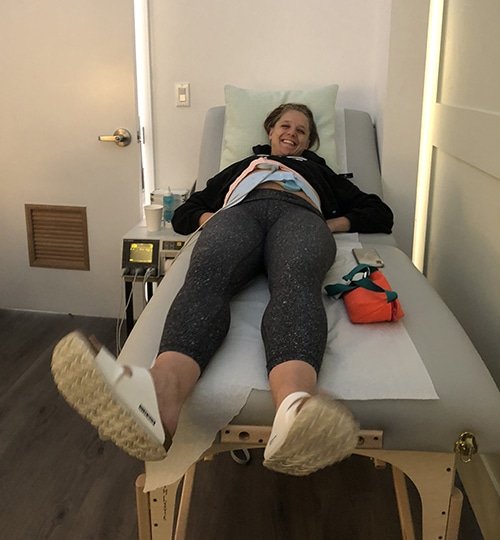 Thanks for the super flattering pic, B!

My next appointment is this Wednesday, so hopefully baby has been bulking up in the past week. And based on the increase in my belly size, I think she has!

It’s also worth noting that Kristin is amazing, and as soon as she mentioned that the baby wasn’t gaining or growing a lot week by week, she immediately reassured me and told me I haven’t done anything wrong. She said it’s really common for moms to want to blame themselves or feel guilty, and she told me not to do that. It’s not because of my diet or working out or any lifestyle choices I’ve made. And again, she reaffirmed why I am so happy we went with this practice, where I get so much of her time, energy, attention, and reassurance. I am so grateful for the level of care I’ve received throughout the past nine months. 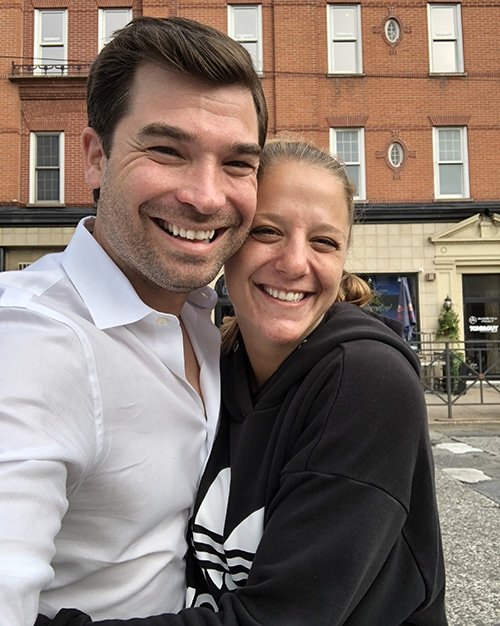 Tradition! We always take a selfie after every midwife appointment. It’s nice.

I got a prenatal massage Friday afternoon, which was 75 glorious minutes of absolute bliss. I fell asleep toward the end, which bummed me out. I know some people like falling asleep during massages because it means they’re so relaxed, but I like to be awake to enjoy them! (You? Chime in on this HEATED DEBATE.)

I had some random groin pain — more like discomfort, actually, since it didn’t hurt — one day last week, right where my legs attach to my pelvis. It only lasted a second, but it was weird, like my legs were about to fall out of their sockets! Hopefully that doesn’t happen! 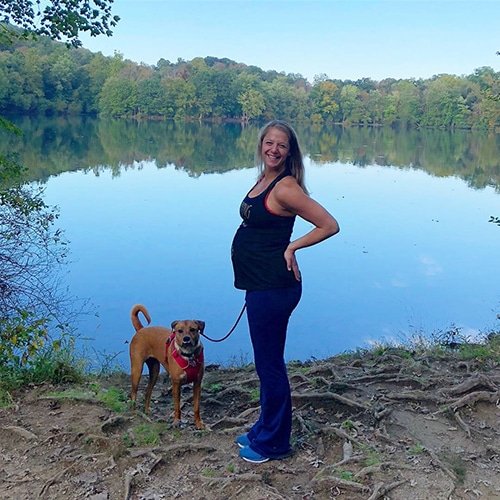 Sunday hike + swim! I didn’t swim, but Ellie did.

And on Tuesday night, Brian was testing out his fancy new Sonos sound equipment (SO necessary with a newborn on the way…), and once it was all set up, he tested it out by putting on The Greatest Showman. This, to me, was the most thoughtful and romantic gesture of all-time. And as soon as the movie came on, the baby started going crazy. I swear she loves this movie as much as Ellie and I do, probably because we’ve watched it nine thousand times during my pregnancy. It makes me happy that we already share interests!

FIVE GUYS FRENCH FRIES. On Sunday, Brian asked what I wanted for lunch, and this was the only thing that came to mind. I had only ever had Five Guys fries once before, but I remembered them being perfect. So we went to Five Guys, and much to my delight, Brian returned to the car with not one but two giant bags of fries. Good man. ALI DOESN’T SHARE FOOD. 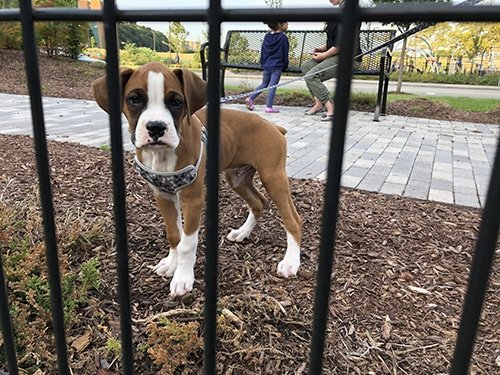 THIS IS A PUPPY I MET NAMED BENJI. I JUST WANTED YOU TO SEE HIM!

As I’ve mentioned, I’ve really been craving a good outdoor run. I’ve also been craving a visit to Central Park. And late in the week, I discovered that New York Road Runners was hosting a 10K on Saturday! So I signed up! And I ran it! 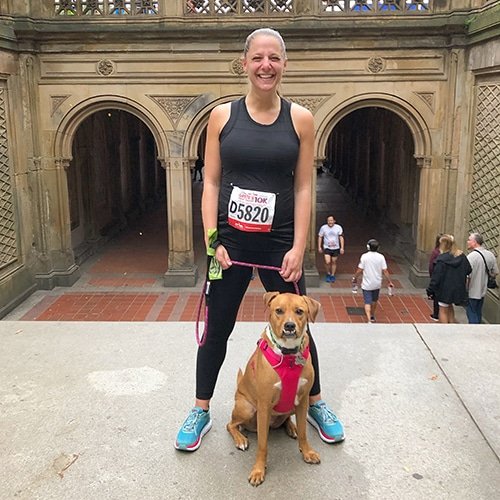 I didn’t know how this would go, but it went amazingly well. Before the race, I promised myself I’d take it easy, which was an easy promise to keep. I ran the first half of the race (no watch, wasn’t checking the clocks, but the timing mat at the halfway point had me running around a 10-minute pace), and then walked all of the uphills in the second half. (I love walking.) I also made one bathroom stop around mile 3.5. It was so fun, and I loved running one last race (I assume!) with baby in tow. Brian and Ellie were out cheering and Mary was there to greet me and hug me at the finish line, and my stomach behaved remarkably well. It was such a good day. 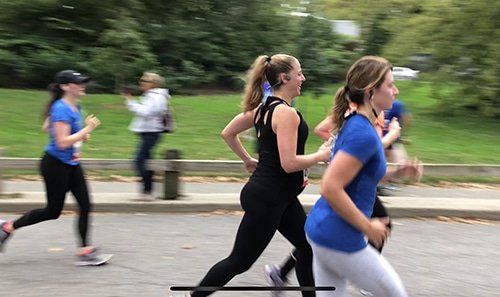 BABY ON THE RUN! LITERALLY!

Otherwise, I did a few Orangetheory workouts, which were fine. Some days there’s pressure on my bladder that makes running feel weird, and other days it’s NBD. So I just roll with it.

My Grete’s Great Gallop race t-shirt, of course. I always wear my race shirt once I’ve showered after the race. I asked for a size extra medium, which they told me doesn’t exist. I got a large, and it makes for a beautiful crop top. 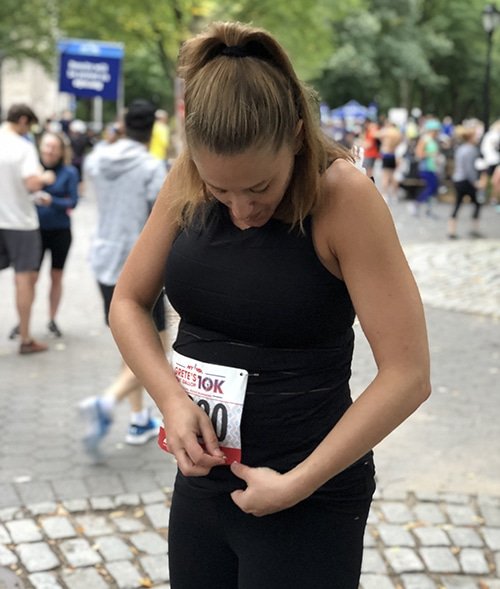 Pinning a bib over a baby belly is hard!

I *swear* I’m going to get back to baby books ASAP. But in the meantime, I’m finishing up The Subtle Art of Not Giving a F*ck. There are parts I like, but generally it all feels like pretty obvious insight to me. I agree with a good amount of it, but I’m not finding it to be as groundbreaking and life-changing as people insist. (Did you read it? Talk to me.) 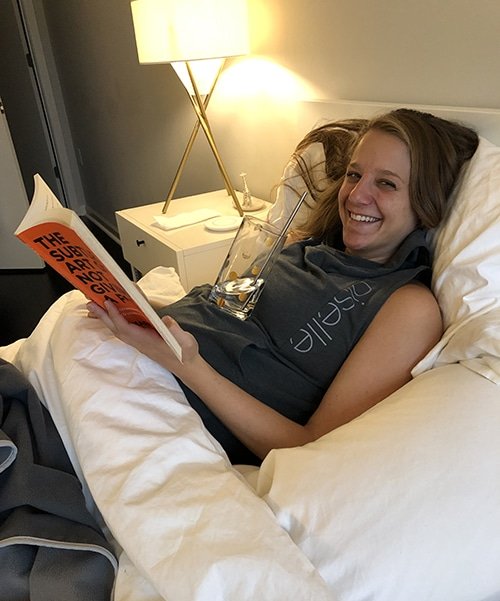 I CAN BALANCE A CUP ON MY STOMACH!!! This is my happiest pregnancy achievement thus far.

Some tossing. Some turning. Some grunting. 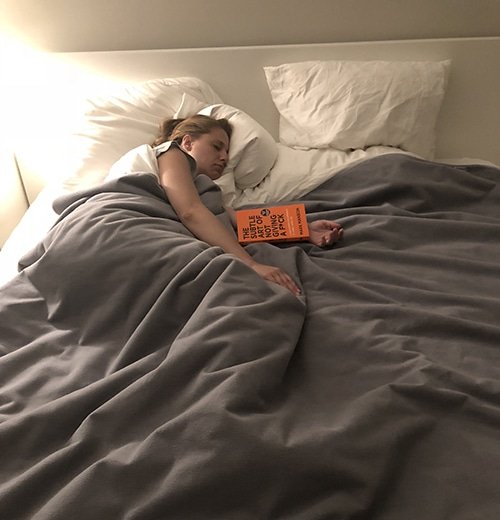 How do people read at bedtime? Books are like Ambien to me.

Will I get my work done before the baby gets here?

Was that my mucus plug? (I won’t share more here. I realize I share a lot but maybe that’s a little much? I don’t know where boundaries exist, so I will withhold from sharing specific details, and I know it doesn’t really matter, but…that might’ve been it?)

How many more of these weekly posts will I write?! 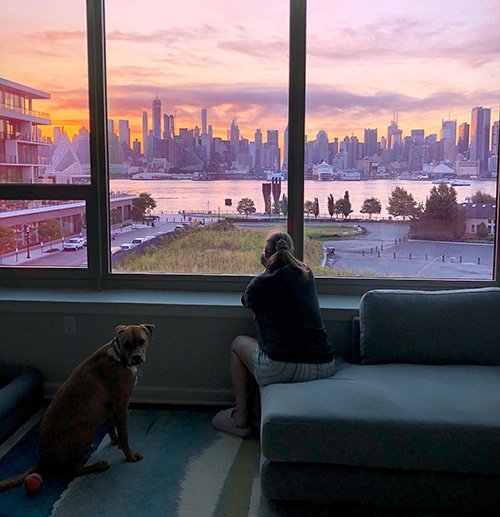 Baby on the Run: Week 36
Back to Blog
Leave a Comment
Posted in Pregnancy and tagged Pregnancy-

I hope I look as good as you when I am 37 weeks pregnant!!! Your baby will be healthy and beautiful. Look at you running a race when you are close to giving birth. You go girl!

I just wanted to say that my daughter measured small at all of my appointments. I gained weight like a champ but she did not, and my doctors actually did not induce me even though I carried her to almost 41 weeks simply because she was still a peanut. When she was finally born she had tre characteristics of a 37 week baby, though we knew for certain what day we conceived and she was definitely almost 41 weeks. She was a petite but perfect 6 lbs 4 oz and while I’ll never know why she stayed on the smaller side, I do know that it wasn’t an indicator of anything wrong. Today she is a beautiful, smart, amazingly but appropriately moody teenager and has been a healthy kid all along! So, this is a long way of saying don’t worry, some babies just develop at their own rate!!

So glad you are feeling good and were able to get out and RUN!! YAY! 5 guys fries are hard to beat! Also, the windows in your new place are so amazing! I don’t know how you get anything done with that incredible view:)

My hubby relocated to the guest bedroom about a week ago and I’ve seriously been sleeping so much better (I also have a trillion pillows surrounding me). Also… I’m not sure which one is worse, measuring small or big. I had an US today and learned that his head size is like 98th percentile with a heft weight behind him, and I’m 37 weeks and change. It’s great to tell a pregnant woman, “oh they’re just estimates” but it’s OUR bodies that grow and birth them, so I say we get to punch whoever says something we don’t like 😛

I’m 35weeks, so I’ve been quietly following your journey from a couple weeks behind! My girl is also estimated to be measuring small- although we’ll confirm her rate of growth next week with the follow up ultrasound.

Having a care team you trust is sooooo important! . I’m with a regular OB, and when things were going normally, every was pretty minimal, which suited me. When things came up, the level of care has been excellent, and all of their advice/recommendations have been extremely evidence based and helpful. I’m glad you love your care team too!

Here’s to both of us having nice healthy girls in the next several weeks!

brb laughing forever at “my baby was measuring small but was born in the sixth grade.” I literally haven’t finished reading the post yet and needed to scroll down to comment on how funny that was.

Pingback: Baby on the Run: Week 38Ali On The Run