“Welcome to Week 36, bitch,” said the excruciatingly painful calf cramp that woke me up in the middle of the night last Tuesday. (Say it in Luke’s voice from The OC, though. I’m swearing because it’s a quote. Duh.) This charley horse was no joke. My calf was sore for like three days after! (Also me waking up screaming at 36 weeks pregnant = Brian waking up, yelling, “ARE YOU OK?! ARE YOU OK?!” in case I’m in labor, and then immediately falling back asleep, unfazed, when I say it’s a muscle spasm and not my water breaking.)

Not to be outdone by a pesky lower-body part, my face decided to get in on the action later in the week! I woke up Saturday with a giant, and I mean giant cyst on my chin. I’ve always been prone to cystic acne, and sometimes these giant bubbles just show up on my face and they hurt and they torture me.

Aside from Week 36 being incredibly sexy, it was also productive. I got the results from my Group B Strep test, and yay, my vagina doesn’t have strep! So all clear there. On Sunday, Brian and I took an infant safety and CPR class, so now I am basically a doctor. (Seriously though, I’m really glad we did this. Hopefully I never have to use my newfound knowledge, but I learned a lot. It was sort of creepy using those little infant dolls to practice CPR, but obviously incredibly valuable.)

And then we installed the baby’s car seat! I thought this would be a bit of an ordeal, since people seem to make a big deal of INSTALLING THE CAR SEAT. But it took all of five minutes, and it’s in there nice and tight and secure and baby is going to be super safe! (And I will do my best to avoid hitting poles in parking garages, which is something I have allegedly been known to do. IT’S NOT MY FAULT.) 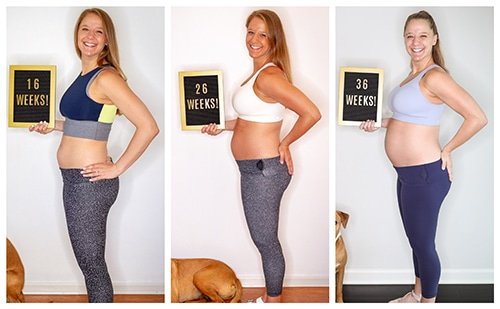 Each of these photos were taken 10 weeks apart! How did I go from SO TAN to SO PALE? (SORRY I CROPPED U OUT, ELLIE.)

a head of romaine lettuce! I’m not super familiar with this size. I generally eat romaine all chopped up. Another source says baby at Week 36 is the size of a papaya, so I went to Whole Foods to find a papaya and OH MY GOD WHY DID I DO THAT? I held it up for the photo and clearly looked terrified, and a fantastic Whole Foods employee laughed at me. I explained that apparently my baby is the size of a papaya this week, and he said, “Oh man — do you want me to find you a smaller papaya?!” 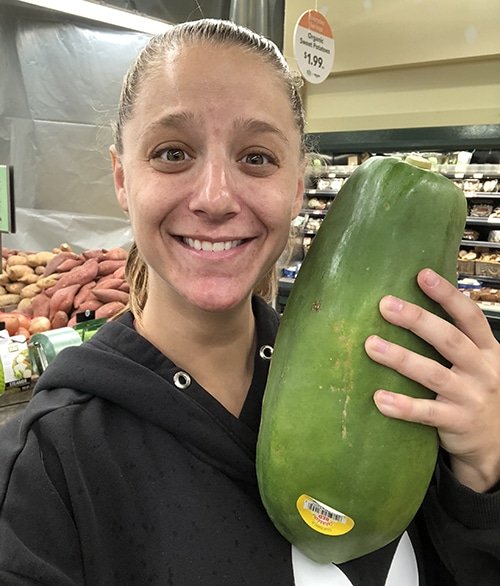 THIS PAPAYA IS TOO BIG.

The usual. Crohnsy Crohnsy! I feel like I grew a lot this week. (Physically. Not emotionally.) My belly feels significantly bigger right now, and baby is taking up as much space as possible in there. She’s all the way up in my ribs, which makes breathing while sitting down hilarious. It also makes putting on my socks and shoes a really elaborate ordeal. One morning, I was putting on my footwear, and Brian came into the room and asked, “Are you OK?” He seemed concerned and I was all, “I’m fine, why?” And he gave me a look and really kindly explained that I was breathing really heavily. All good, just getting dressed for the day!

We spent Saturday at the beach with Ellie, which was wonderful. We went to the beach right after finding out I was pregnant back in February, and we had such a fun day, so it was fun to sort of bookend this pregnancy with beach trips. (I know I could still have several weeks to go, obviously, but we probably won’t go back to the beach between now and baby day, whenever that is. The timing just worked out.) 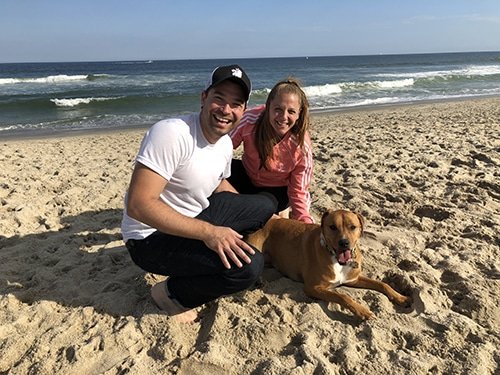 I was also hit with the realization this week that we are really coming to the end of this pregnancy. I’m not due until October 23, and statistically speaking, I have a few weeks. But if baby decides to come early, that would be soon, and I have a handful of work deadlines looming. On it!

I bought a giant (really giant, like bigger-than-my-cyst giant) bag of Peanut M&Ms to bring for the nurses at the hospital. And somehow the bag ended up open, and somehow now all the M&Ms are gone and I have to go buy new ones. Maybe we were robbed in the night, IDK. But the M&Ms are gone. Somehow. Magically.

A decent week of Orangetheory workouts. On Wednesday, I was trotting along on the treadmill, and this woman who is so badass was next to me and asked how I can run with a baby in there. She was literally running at 11 miles per hour and talking to me like it was nothing, and I was like, “How can you do THAT?!” Meanwhile, two different people at Orangetheory this week told me I was waddling, so who knows.

I finished Week 36 at Orangetheory with the 12-minute distance challenge run. The goal is to run as far as you can in 12 minutes. I used to take this very seriously! This time, my goal was to run the entire time without taking walk breaks. I did it! I took it nice and easy and ran 1.31 miles. (We also did a 12-minute run when I was 25 weeks pregnant, and apparently I covered 1.4 miles that time. It’s probably good I didn’t look that up before today’s class, or I would’ve been a little more aggressive which…meh.) 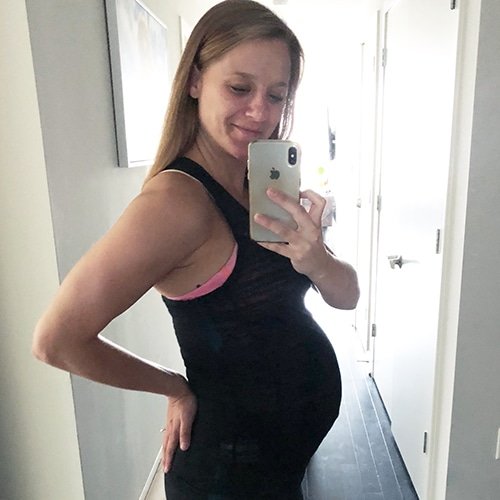 I am refusing to buy any more maternity stuff, no matter how much longer I am pregnant. I figure at most I have five weeks to go, so even though I’m busting out of everything, I’m just going to make it work. Sorry, public. 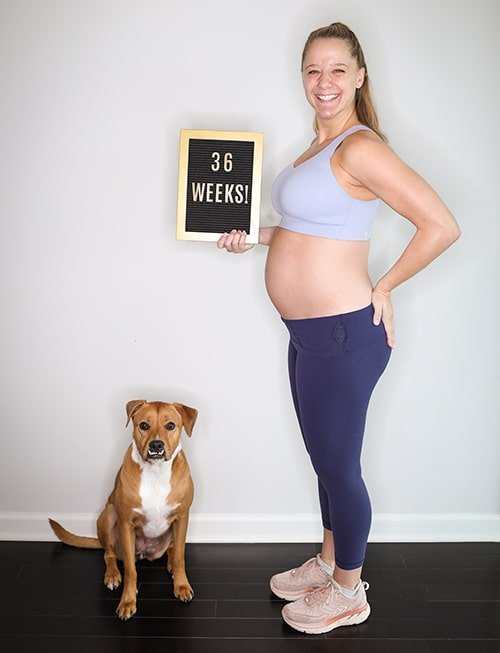 Cruising right along! I wonder how many more of these we will get to take!

Well our new couch arrived last week, and that has been a real problem for me. After two couch-less months, I now have a soft, cozy spot to sit, and it has rendered me narcoleptic, I swear. If I sit on it “to get work done,” I inevitably end up asleep. Otherwise, at night, I mostly sleep fine. Most nights I don’t get up to pee at all, which I appreciate. 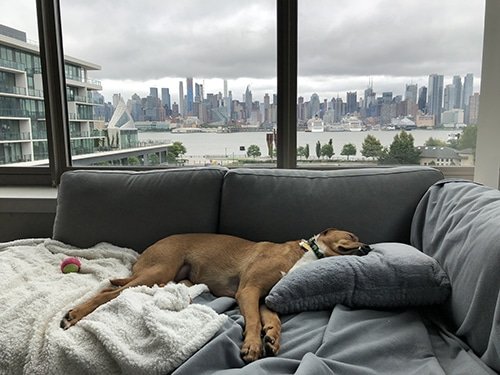 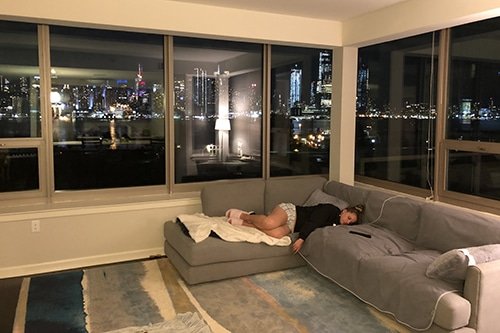 Will I know I’m in labor? How will it happen for me?

Between the baby moving, Crohn’s disease, and just general stuff happening, I am not fully convinced I’m going to know I’m having contractions. Will I know I’m in labor? I know to expect contractions to feel very different from Crohn’s disease, but I know lots of Crohn’s moms who say they actually didn’t know they were having contractions because they’re so used to the brutality of Crohn’s-related pain. So if I have a home birth because I didn’t realize I should be going to the hospital…that will actually be awesome, because then Ellie will get to be there for it!!! 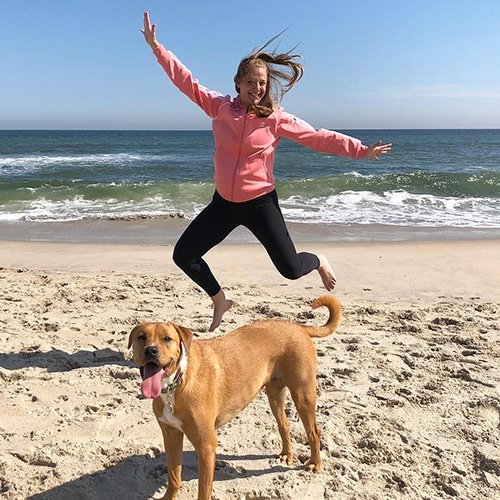 Can’t wait to meet you, baby! Look how excited we are!

And now, Week 37. Officially, by some definitions, full term. Officially not ready for baby to be here just yet, but officially excited. And officially need to get off this couch.

Hi. You.Will.Know.When.It.Is.Real 😂 But what’s nice is you KNOW and no more wondering if you peed your pants a little or are just willing the pain the be real so baby arrives (6 days late over here!). Good luck! So pumped that you’ll be experiencing the best day of your life so soon.

I will miss your updates when baby is here! You will know when you are in labor and apparently when your water breaks… if that happens first. I may have gone to the hospital twice because I thought mine had broken, but had only failed at kegels for 9 months. True story.

My midwives said that you are in labor and far enough to go in, when you call them and are like, “we are on our way”… deal with it. Personally I knew I was in labor after a few hours of contractions at home and I was like, “just kidding, let’s do this another day!”.

It’s my favorite game! Giving parenting advice to people who haven’t asked for it!

I would defer to what everyone else said — when my wife was pregnant, she didn’t go into labor either time (each time she was induced) — but I will say this about the choking/cpr class: it is the scariest shit you will ever deal with.

I had plenty of people tell me before our kids were born that I should be scared of changing diapers (not a problem) or giving baths (usually fun), but I was not prepared for how scary it is when they start choking. And they will — because it has not occurred to them that chewing a piece of meat the size of Kentucky is a TERRIBLE IDEA.

So, yeah, though you won’t have to deal with it for a while after the baby is born as they’re eating liquid of some form, when you get to solids just steel yourself for it, and don’t panic.

Also, keep them in the baby car seat that just clicks in and out of the seat as long as you can (it’s so much easier than trying to put them in and out each time).

1.31 miles in 12 minutes at 36 weeks pregnant post-calf-charlie horse, while housing a small child / giant papaya sounds legit. What is that, a 9 minute pace?! Props.

I don’t know how they work for cystic acne, but I’ve been having major break outs just because the world is terrible, and hydrocolloid dots (like COSRX) have been saving me.

Pingback: Baby on the Run: Week 37Ali On The Run