As of Sunday, Baby Cristiano is officially due in ONE MONTH. And in just one week, I’ll be considered full term. When did this all happen?! (I mean, kidding, because I’m very clear on when, exactly, this happened, but where has the time gone?!)

Brian and I got to see the baby this week, which is always a treat. Everything looks good, we were told, and it was generally an uneventful appointment. I did my Group B Strep test which, turns out, is not a throat culture test! (It was a simple swab further south, and was actually less annoying than a gaggy throat culture, but I definitely thought I’d be saying aaaaaah, but instead I was told to take off my pants.)

Other than that, Week 35 was pretty unmemorable. With the arrival of a lamp and a table to go next to the rocker, the nursery is officially good to go. That room makes me feel very happy and relaxed. Ellie likes it in there, too. 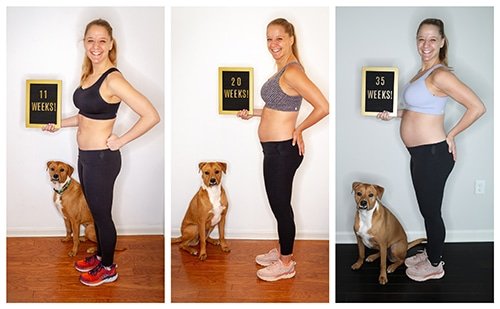 A little sad that I’m getting less tan…

a honeydew melon! Not as delicious as cantaloupe. (Or, according to one website, baby is the size of an American Girl doll! I don’t have Samantha here at my apartment, but I feel like Samantha was HUGE, and there’s no way she’s hanging out in my uterus right now with her thick-as-hell bangs and her “commode” and her checkered dress which, YES, I had a matching one.)

Also, a few notes on this Instagram post. I mentioned that I was nervous for our appointment the other day because the baby has been measuring small all along and that I worry it’s because I have Crohn’s disease and I haven’t been able to get her proper nutrients. I have been told at every appointment that, fortunately, everything looks great, and baby is nice and healthy in there! She’s doing just fine and, for the most part, so am I! I’m so happy we’ve made it to 35 weeks already and that she’s still hanging out in there, and I know that the measurements are estimates and that baby will continue gaining weight until she’s ready to come out. I know that! 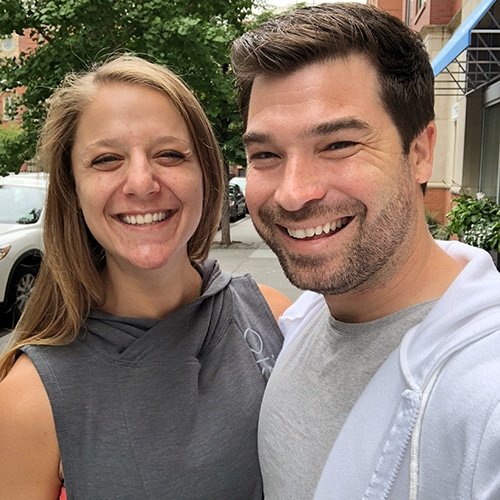 My rambling had more to do with my guilt over having a chronic illness, and the fact that Crohn’s disease, especially lately as I’m flaring, is constantly on my mind. I think this is something people with similar illnesses can relate to. I’m constantly worried about how my illness is affecting other people, and that is amplified now that the “other people” in question is the human I’m growing on my own here. I think maybe I did a bad job trying to convey that message, and instead it came across like I think my baby is going to be weak and tiny and isn’t going to gain any weight ever and we are all going to be sickly and her 4 lb. 9 oz. estimate is OMG SO SMALL and completely accurate. Not the case. I know the facts! I’m good! We’re good.

Good! Still Crohnsing hard and still frustrated by that, but on the pregnancy-specific front, I feel well and fortunate and grateful to still be moving and grooving. (When did I become someone who says “moving and grooving” so often?)

I got the loveliest prenatal massage on Tuesday afternoon. Caroline, my favorite massage therapist, kept asking if I was sore, and I said no, and she said my muscles were tight and “being difficult” and “not letting her in.” SORRY, CAROLINE. The 75 minutes went by way too fast and I almost cried when it was over. ALMOST.

Some things are officially complicated for me now, like putting on and taking off and tying my shoes, and bending over in general. I feel like I grunt a lot! And some mornings, I feel a little nauseated, like I did in the first trimester. Also, my skin had gotten so much better, and now it’s getting a little funky and bumpy again. Cute! 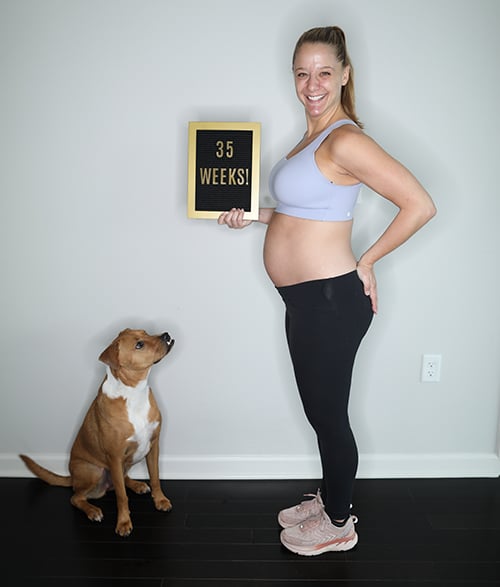 Fall things! McIntosh apples and apple cider! I want to do some baking this weekend with pumpkin things and apple things! (I will probably get lazy and just light a candle instead, but that’s fine, too.)

Brian was in California for most of the work week, and I was convinced I was going to go into labor while he was gone! He traveled pretty much nonstop last year, but actually hasn’t traveled hardly at all since we found out I was pregnant. So, go figure, this last-minute trip came up when I hit 35 weeks and it was very important and he had to go and it’s fine, but as soon as he left, I was kinda like…oh god. 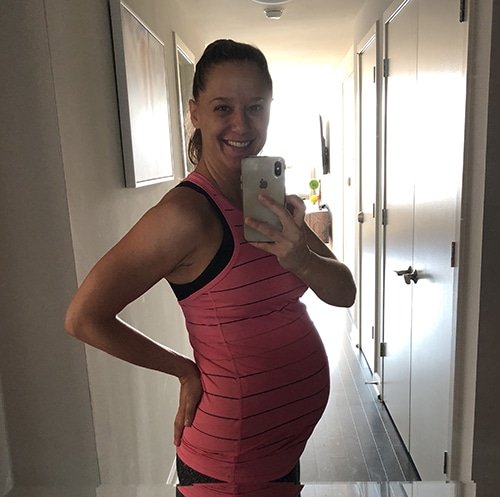 I went to Orangetheory Tuesday morning, right after he flew out, and I barely moved. I think I walked at 3 miles per hour the entire class, as if suddenly doing the same thing I’ve been doing for the past 35 weeks would force me into immediate labor. I was just a bit paranoid.

Other than that workout, I felt good at Orangetheory the rest of the week. Right now, I run the pushes and all-outs and walk the base paces. And I really only walk those because running for more than a few minutes at a time makes the urge to pee really strong. So it’s a good balance for me.

I will say, the arrival of the cooler weather and the crisp fall air makes me want to run outside and run hard. I miss track workouts and running hard and training for something! (But again, it’s more Crohn’s than pregnancy keeping me from doing most of those things. Such is life!)

No bra! Pajamas! A bathrobe! 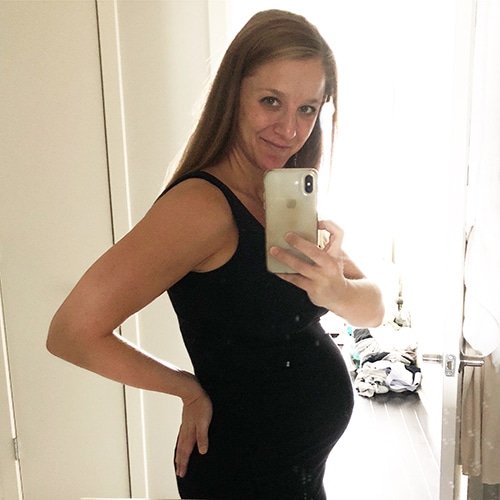 No pregnancy reading this week. I did read baby books to Ellie in the nursery a few times, though.

Fine some nights, but terrible both weekend nights. Pretty sure that has everything to do with going to bed with a full (uh, gassy) stomach, though. 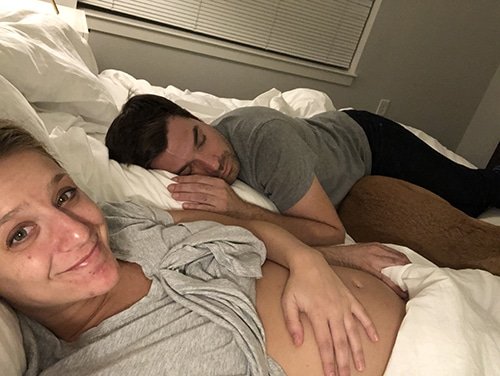 Brian fell asleep with his hand on my belly, and Ellie fell asleep draped over my legs. I was pinned, but happy.

Only a few more of these posts to write. CRAZY!

Oh man Ali, I feel ya! That guilt from chronic illness is tough stuff to get by. I’ve had a minor flare of my Crohns the last week and have felt so bad that I can’t be as active and a ‘fun mum’ with my 4 year old. It’s so hard. I think my biggest fear right now is getting really, really sick and how that would affect my son and our lives. I’m a single mum now so it really plays on my mind, especially when my Crohns acts up and reminds me! It’s so tough – as if we don’t have enough to deal with with the physical side of this disease, we also have to worry about the ‘what if’s’ and how that will affect not only us but those around us! Oi. You are so awesome though – the way you handle your illness is something to be admired! Only 5 weeks left is crazy! I feel like your pregnancy has sped by lol Take care!!

Reading about Brian going away reminded me about being 36 wks pregnant with my first and my husband going to The Netherlands on a work trip. We were living in Cambridgeshire in the middle of nowhere, my parents were hours away and he had been gone about half a day when I suddenly thought “oh. I’m on my own here, was this a good plan?” Was pretty sure that my dog wouldn’t be up to the necessary assistance needed. But it was all fine! You look amazing x