Week 30 was a week. I was exhausted, emotional, overwhelmed — I was, to be honest, a complete mess. But amidst my madness, there were high points!

I had an appointment with the midwife on Friday, and the craziest thing about the appointment, in my mind, is that it was my last “every four weeks” appointment. From here on, I’ll go in every two weeks, and eventually, until baby comes, every week. Every day last week felt like a week, and the week felt like a year, but ultimately, time is totally flying. 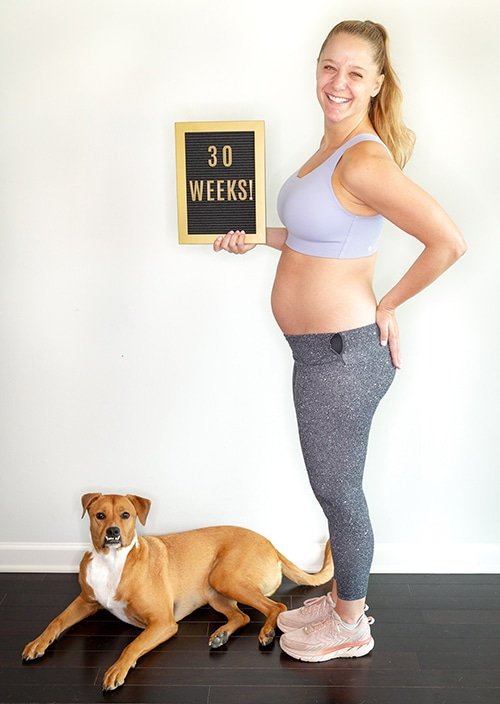 The appointment went well. The baby was funny on the ultrasound (I mean, I always think she’s funny, even when she’s just snoozing in there). She was covering her face with her feet and her hands, and we could see her holding her little foot. (You know Standing Leg Raise pose in yoga? She was basically doing that, fetal-style. Clearly those two “prenatal bedtime yoga” videos I did really stuck with her!)

Baby is measuring a bit on the smaller side — she’s clocking in around 2 lbs. 12 oz. — but they said everything looks good and healthy. This was actually the first time I looked at the scale throughout this pregnancy, and I’m up around 16 pounds. (Pretty sure it’s double that by bedtime most days!)

Midwife Kristin had a checklist for Brian and me, which I obviously loved, and I felt good about the fact that, in spite of constantly feeling like I’m behind on all the timelines on the apps and compared to what other people have done, we were able to check off almost everything on her list! I’ve ordered my breast pump, we took a childbirth class, we don’t have our carseat yet, but someone bought it off our registry, which is absolutely amazing, and I’m meeting with a pediatrician next week. 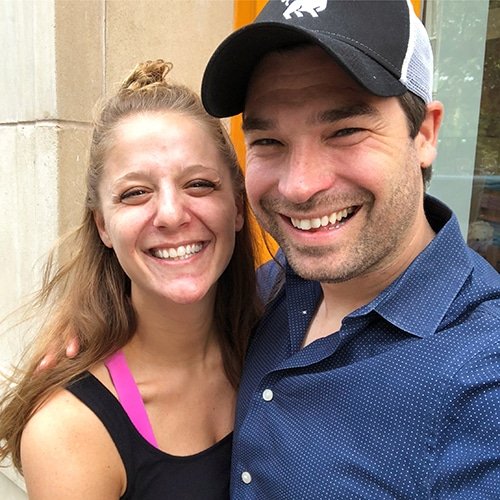 Brian and I always take a photo together on Ultrasound Day, but we didn’t get any printouts from the sonogram this time! Baby didn’t really want to have her picture taken, and we didn’t force it. She has a lifetime of that ahead.

Kristin also said she wants this baby to be early so it’s a Libra, not a Scorpio, and while I’m not a big horoscope person so I don’t even know what the hallmark qualities are for Libras vs. Scorpios, I am a HUGE fan of timeliness! (Also, one of my best friends is a Scorpio, I do know that, and she’s awesome, so I would be fine with a Scorpio baby! If you’re a Libra or a Scorpio, tell me about yourself and why you, zodiac-ically speaking, are awesome.)

Also! Brian and I officially agreed on a name on Monday morning! It’s the name I’ve loved since the very beginning, and he has decided he, too, loves it, and we agreed on a middle name very easily. So YAY!

Can I keep the rest of this recap short? Doubtful, but let’s see!

a large cabbage, a zucchini, or a butternut squash. I swear we’ve been some form of squash for two months now.

Oh so emotional. But don’t worry, I reacted super rationally on Friday when the baby’s crib was supposed to be delivered and assembled and the delivery people showed up without the actual crib. That was a great day for me. The crib came on Saturday, though, and it’s beautiful and perfect and the baby’s room makes me so happy. I’ve declared it a stress-free zone, so it’s where I go when I’m feeling anxious or worked up. 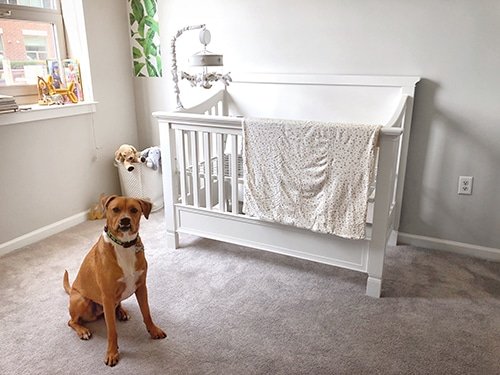 Ellie thinks this is her room…

Eggs. Also, at the wedding we went to two weeks ago, they had S’MORES afterward! (Everyone should do this, always!) And not only is that awesome, but ever since, I have just been wanting more s’mores. 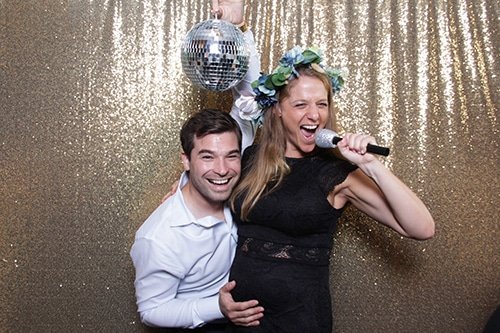 I kicked off my pregnant thirties by running the timed mile at Orangetheory, which was fun. This was my third time doing the timed mile during this pregnancy! The first was when I was unknowingly a few days pregnant and I ran it in 6:26. The second time was at 17 weeks, and I finished in 7:32. And this time, at 30 weeks, I ran a 7:59, which I’m proud of. I definitely could’ve pushed a little harder toward the end, but I’m just glad I didn’t need a bathroom stop in the middle of it! 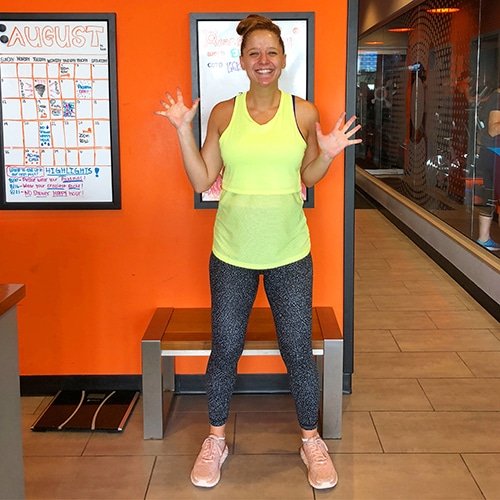 The rest of the week was meh. Some days I felt awesome, other days I couldn’t even walk on the treadmill. I feel fine pregnancy-wise, but I can tell this is the Crohn’s taking its toll and hijacking my workouts and life in general. So just rolling with that as best and most optimistically as I can. (Easier some days than others, of course.)

I bought some nursing bras for postpartum and oh my god they’re so comfortable that I’m wearing them already. I’m used to big, bulky, try-to-perk-’em-up bras, but these are just soft and lovely and comfy!

Pregnancy, Childbirth, and the Newborn, which I wrote more about here. (I’m not done yet, but I really like it.) I also read I Knew You Could! to Ellie in the nursery on Sunday and I sobbed the entire time. That story was really resonating, man. 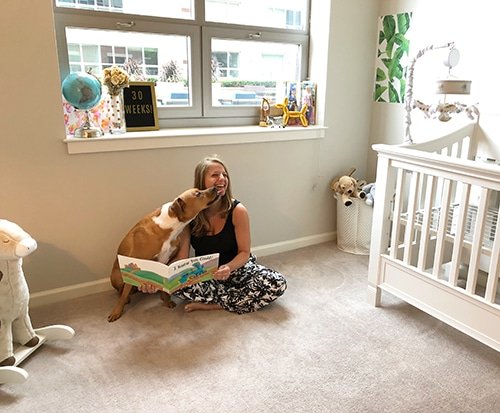 She was licking my tears. I was a mess.

I was exhausted all week. I felt like I could sleep for a month if given the chance. I sleep fine at night, but most days, around 2 PM, I was toast. 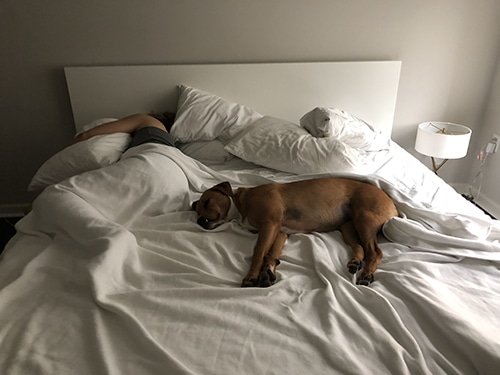 No room for Brian. Poor guy.

I’m convinced baby could show up any day now. Which I know isn’t likely, but WHAT IF? I have a few big things still on my baby to-do list, including getting our stroller, locking down childcare plans, and actually organizing the baby’s room. But it’s coming together!

Also… I’m kind of excited to give birth. My amazing sister-in-law (Tyler and Abby’s mom!) wrote out her birth stories after having both Ty and Abby, and she sent them to me last night, and every time I read someone’s birth story, I’m reminded that every single experience is so different, and I have no idea what mine will be like and I have no expectations around it. So I’m excited to see how it goes!

You might have already talked about this in another post and I missed it, but I was wondering what, if anything, are you doing treatment wise for your Crohn’s during your pregnancy. (Asking for a “friend”. 🙂 )

I’m still on Stelara, which I was on before I got pregnant (at-home injections every eight weeks), and just finished a 30-day round of Uceris, which we hoped would help. It didn’t, sadly, so we’re going to do 30 more days. Fingers crossed! I was feeling great through the first trimester, and started experiencing Crohn’s symptoms around 17 weeks. The past few weeks have been pretty bad, so we’re hoping to calm it before baby gets here!

I think I had the same due date or just about, I forget yours, last year (oct 20) and my baby came on oct 16 so he’s a Libra!! I have two good friends one who is a Scorpio and one who is a libra. I love them both! On my birth calendar pool we had the line marking Libra/Scorpio marked our. But I read online (super reliable) that baby libras are “cosmic angels” and that stuck with me 😂😂😂 I know he’d be perfect either way but so far I’m loving the Libra baby!

I love these updates Ali!!! I am 21 weeks, and I feel like I resonate with everything you are saying by the time I catch up to the week you wrote about. So THANK YOU for being real and honest. And also, you look amazing!!!!!!!

You can still run a faster mile than I can at 30 weeks! Amazing! You rock! Loving your preg-posts! 🙂

Yep, you’re still way faster (and way cuter in a sports bra and tights) at 30 weeks than my non-pregger self. And Ellie’s (I mean baby’s) room is so cute!

Love these updates! You are doing awesome! I have a question, what have been your favorite ab/core exercises? My core took a beating my first pregnancy because I was nervous to do anything!

So, I don’t follow astrology AT ALL, but my husband, aka the most calm, rational, and patient human I’ve ever met (I’m not partial) is a Libra. He’s like stupid calm and just so…nice. A perfect balance to me, who he lovingly (and jokingly) reminds to focus on one irrational fear at a time when I go off the Leo deep end.

Pingback: Baby on the Run: Week 31Ali On The Run