There was a lot of baby action this past week!

I had my first-ever chiropractor appointment, I spent one night doubled over in pain for mysterious reasons, we had another appointment with the midwife and got to see baby dance onscreen, and baby went to his/her first wedding. So many activities!

Let’s see if I can keep this short… 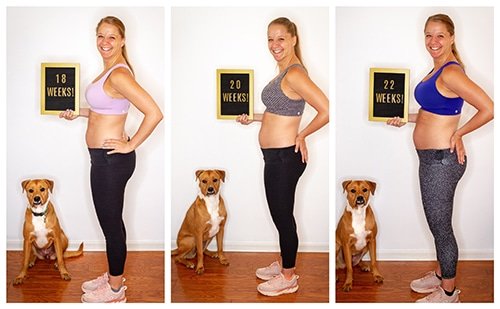 I am growing (and getting tanner). Ellie is staying the same size.

BABY IS THE SIZE OF A…

spaghetti squash, coconut, or large mango, and should be clocking in at one full pound! (Our ultrasound technician measured baby to be on the small side, but she said those measurements are just estimates and they’re not totally accurate and a potentially little baby at this stage is nothing to worry about.)

And baby is definitely showing! Last week, two different people I see on a regular basis (our weekend doorman and a mom who lives in the building) both congratulated me when they saw me walking around in tight (er, too tight) workout clothes. It made me happy! (Granted, that’s risky. Unless I see a baby coming out of someone, I cannot bring myself to comment!) 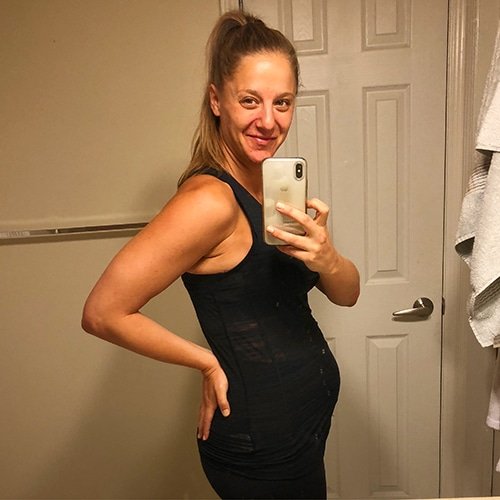 Some days great. Other days weird.

I’ve mentioned my lower back pain, which has been going on for a few weeks now. Some days it’s NBD, other days it’s downright debilitating and I can barely bend down to put on my shoes. Or my socks. Or my pants. So I just don’t. (Bathrobe life is the life for me.) I was hoping monthly pre-natal massages would help, but unfortunately they didn’t scare the pain away for long. So I went to a chiropractor who specializes in pregnant and postpartum women. Chiropractors scare me. I’ve always resisted. But I also don’t want to live with this back pain for the next four months, so to the chiro I went! And the appointment was good. She did some adjustments and stretches and assessments and parts of it were like getting a massage, which I liked! She said I’m having SI pain, which I know from Googling is very common in pregnant women, and that my pelvis is just shifting out of alignment. 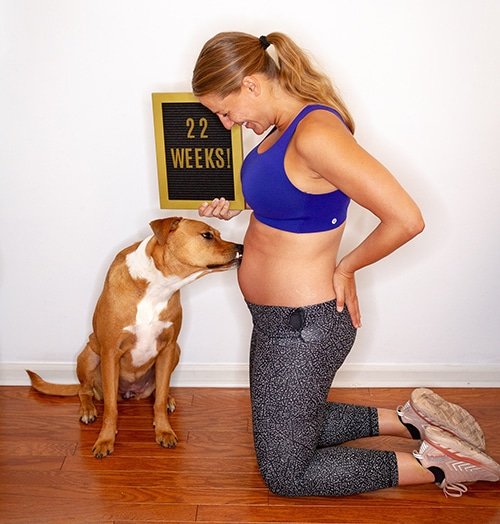 Then my day got weird. I came home and sat on the couch for a minute and woke up two hours later. I thought I left that exhaustion back in the first trimester, but I felt completely knocked out. Then, I went to get Ellie from school, and on the walk home, I started to feel really off. I got a little lightheaded and started to feel like I was on the verge of a panic attack. I got this insane pain on my left side (sort of in my abdomen and stretching around to my low back), and could barely stand, let alone keep walking Ellie. By the time we got home, I had to run for the bathroom. I felt like I was going to puke and do other stuff simultaneously. (Neither happened, but I sat there for a while in discomfort.) The pain stuck around for a few hours, and was so bad I actually called Brian and asked him to come home from work, which I never do. Of course, as soon as he got home, I started feeling better and felt like a drama queen. But it was bad, I swear!

I texted my midwife’s office (so grateful for texting and not being limited to calling during office hours, because it was late!) and she said that as long as I wasn’t bleeding (I wasn’t), I was probably OK. She said to drink a lot of water and take a bath (I drank water, but didn’t take a bath), and it all passed eventually. It was really weird. Google said maybe round ligament pain, but of course I convinced myself I had listeria. (Google is not my friend!) The midwife also later suggested at our appointment that this may have been a reaction to the adjustments at the chiropractor, and that the shifting of things may have moved stuff around. She used better words. I’m messing this up. 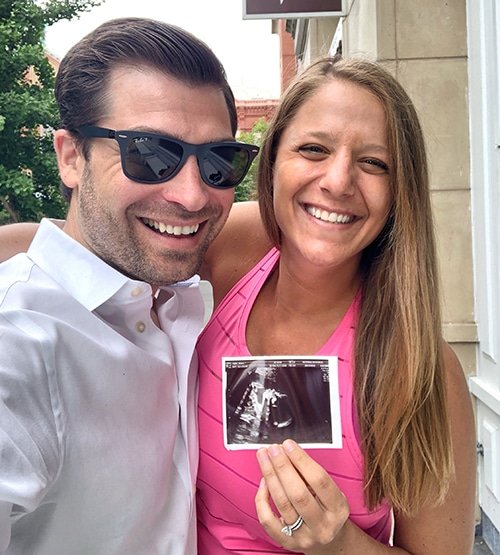 Baby did NOT want to pose for us that day.

Other updates from the latest visit to the midwife: We got to see the baby’s entire spine, which was so cool. It’s crazy how much detail you can see from the outside! Science! Baby is still chillin’ in the breech position (feet down), which I could tell based on where those big kicks keep coming. (And again, we were told breech position right now is totally fine. Still loads of time for baby to turn and be head-down when it’s ready to debut.) His or her legs were crossed again, and my placenta is lying a bit low, but they said that also has time to move and not be a concern.

Not gluten, dairy, or sugar, effective as soon as I have time to go grocery shopping. My stomach has been pretty bad for the past few weeks. We all thought that if my Crohn’s were to act up during pregnancy, it would’ve happened early on. But my body has always wanted to do its own thing, and it seems to want to join the party right now. So we’re tweaking my prenatals and supplements, and I’m going back to the anti-inflammatory way of eating that seemed to help last fall.

Nothing exciting. Still Orangetheory-ing. I ran 3.1 miles on Saturday and felt good. (I mean, I made two pee stops and one non-pee bathroom stop, but otherwise felt good.) I’m so happy to be running without a watch, because I just take my time and enjoy being outside. 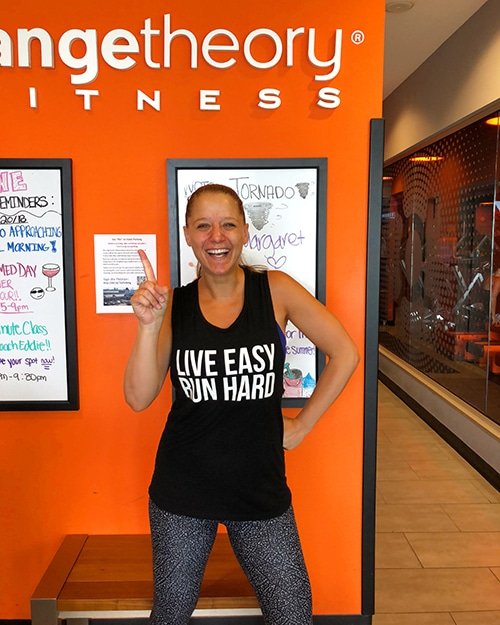 I celebrated my one-year OTF-iversary last week! (Celebrated = went to class. Then took this photo.)

I tried on all those maternity dresses I had ordered for the wedding we went to on Saturday, but they all still look silly on me. Fortunately, I had ordered a few options from Rent the Runway — non-maternity dresses, but they were high-waisted and stretchy! — and one worked great. I was super comfortable, and everyone at the wedding kept rubbing my belly, which makes me happy. It makes me feel loved! (Also, Brian and I were dancing at one point — slow dancing, awwww — and both noticed that my stomach was poking into him. Baby’s first wedding! And we have two more this summer, so TBD what I’ll be wearing to those.) 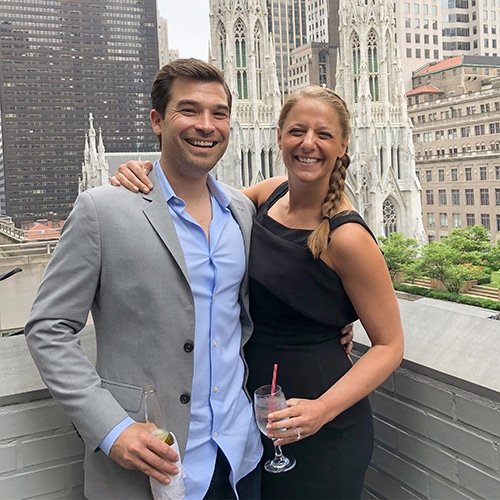 Gotta say, it was nice to wake up the next day without a hangover!

Nothing. I don’t have time to read right now! Life is very good, but very busy! Also, we’re moving! So I can finally really start picking stuff out for baby’s room. So excited! That is more fun to me than reading books about how to raise happy, well-rested babies. I’ll read those eventually.

Fine. I’m up to using six pillows to keep myself happy and comfortable. Brian is down to zero pillows. Marriage is a COMPROMISE. 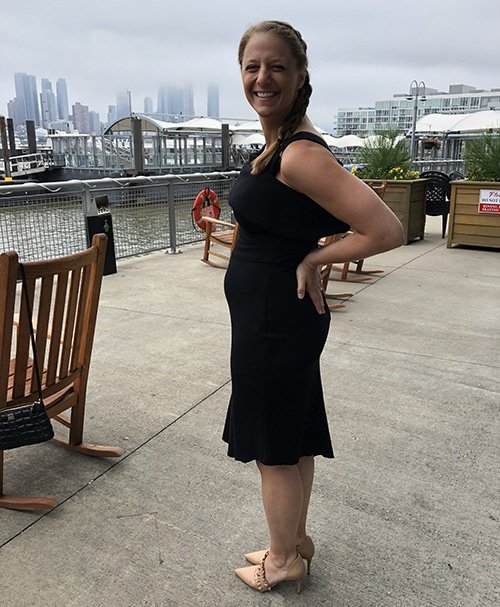 Getting good at this pose…

Nothing! I’m feeling very chill at the moment. No worries, no stress. So far, these 22 weeks have flown by, but I feel like we still have a good amount of time to figure things out, do some planning, and eventually settle into the home where we’ll become a family of four! CRAZY! 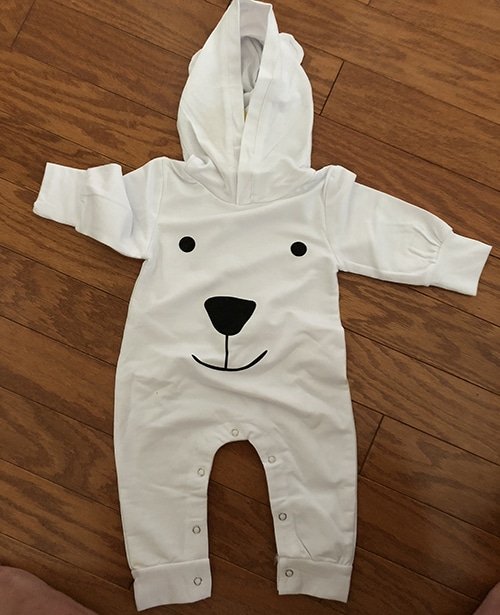 Baby on the Run: Weeks 19 & 20
Back to Blog
Leave a Comment
Posted in Pregnancy and tagged Pregnancy-

Your bump is adorable!!!! I’m also 22 weeks pregnant and was having some SI issues. I saw a pelvic floor PT and I feel SO MUCH better.. and she gave me exercises to do throughout the rest of my pregnancy. Hope you feel better!! PS – Yes. ALL THE PILLOWS.

I love your prego updates and i’ve never had a baby and not planning on it! Living vicariously through you!

Yes yes yes to the pelvic floor PT for your back pain! I went to one in my second trimester and it helped so much!

I feel your pain with the weddings! I went to 4 last summer pregnant and dressing for them was horrible!! I would like at least 4-5 for each one and then have to return them. There’s no good in between

Oh no pain — I’m not complaining! I LOVE weddings! Just…no clue what I’ll be wearing to them! Haha

I second the pelvic PT. I didn’t go until 6 weeks postpartum and wished I had gone while pregnant!!

What is your anti-inflammatory diet? I have crohns too and am in a nasty flare.

Just what I mentioned in the post — no gluten, dairy, sugar, alcohol.

Pingback: Baby on the Run: Week 23Ali On The Run