I ran the Superhero Half Marathon on Sunday!

I was talking to my friend Sarah on Friday, and she said she was running a half on Sunday. I asked which one, and where, and she told me it was in New Jersey. It took two words (“do it!”) and I was in. It does not take much at all to convince me to get out for a fun run.

Instead of the usual way-too-long mile-by-mile rundown, here’s a slightly more concise recap of the highs, lows, and must-knows from the race.

#1 fan! Also, the ONE TIME I don’t braid my hair… I still can’t quite brush it. Ugh. Rookie mistake.

I woke up Sunday morning and was delighted to see that it wasn’t raining. On the drive to Morristown (45 minutes from where we live), it even looked like the overcast skies might turn bright. Instead, it got dark, and it started to pour. It continued pouring while we waited for the race to start. All the runners were huddled under trees and tents, and smart people (not me) were wearing trash bags to stay somewhat dry. Then, we made our way to the start in a slight drizzle, and no joke, as soon as the race officially started, it stopped raining and the sun came out.

At first, this was exciting! I think people actually applauded. I think I may have been one of them. But within five minutes, it was clear that rain may have been preferable. I formed a sweatstache half a mile in and felt like I was swallowing thick air. It was so steamy and humid. By mile two, I was begging for some rain!

Nice and overcast at the start. AND THEN THE SUN CAME OUT.

At just about 18 weeks pregnant, I’m so grateful (I know I keep saying it, but it’s true) to still be out running. Overall, my body felt good. My legs were fine, and even though my belly is growing (and I definitely had to loosen my SpiBelt from the last time I wore it three weeks ago), I felt pretty comfortable on the run. The only problem was my stomach, which was in overdrive for the first 10 miles.

Sarah and I started the race together, and we stayed together for three miles. We were a bit behind the two-hour pacer, and Sarah had initially said she wanted to go sub-2. I knew that wasn’t in the cards for me, so I kept telling her to go ahead if she felt good. There was an uphill around mile three, and she cruised up it while I drifted back. I flew solo for the rest of the race — and she went on to run a 1:58!

Generally, my stomach just didn’t feel great for the majority of the race. I made four bathroom stops, and it wasn’t until the last one that I finally felt emptied out. (The greatest feeling!) I had to stop and walk a lot, not because of my legs, but because I really really needed a bathroom! When I was running, I kept it nice and easy and felt great. 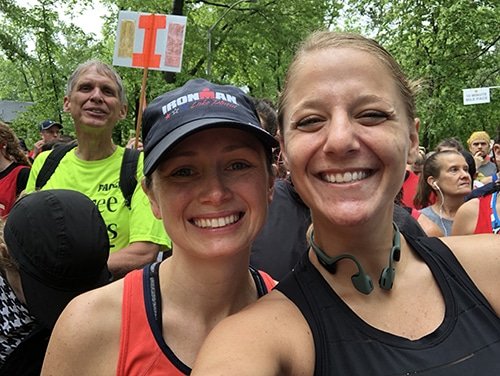 Sarah and me (and the two-hour pacer LOL), ready to run! (PS I ran without music for the first five miles, then started jamming. AfterShokz headphones are THE BEST for racing. And running. And everything. You can hear your music AND still hear what’s happening around you. So much safer than regular headphones. I love safety. Go get some!)

The course, which was hilly during the first few miles (but totally manageable), wove through some gorgeous neighborhoods (I was seriously tempted to veer off course to attend a few open houses), and eventually made its way onto a flat, paved, cool, shaded bike path.

That the race had pacers! I didn’t take advantage of them because I was very much doing my own thing at varying paces, but I always think it’s cool when local races offer this service.

That bib pickup took two seconds. I got my bib the morning of the race and expected a long line of people waiting to do the same. Nope. I walked right up, got my goods, and was on my way to the bathroom in no time.

This photo was FREE! I wonder what I was looking at!

WHAT I DID NOT LOVE SO MUCH:

There were not enough bathroom opportunities along the way. There were porta-potties at the start, of course, but then there were none until mile 5.1 (which is actually back at the start; the course loops back through it). The next advertised bathroom stop was at mile 8, and I could not wait to get there. I basically walked most of miles six and seven because I was in dire straits. I finally got to mile 8 and was anticipating a wall of porta-potties, but alas — there was ONE. And the line was already six people deep. Obviously I waited, but I stood there for a while, and by the time it was my turn, an even longer line had formed, so I felt rushed and anxious and I definitely exited before I felt, uh, fully relieved. The next few miles continued to be slightly uncomfortable. Finally, knowing there wouldn’t be another bathroom until mile 12.5 (and what’s the point then?), I started using the woods (and I was not the only one). As Fergie would say, G-L-A-M-O-R-O-U-S. I finally felt better after my self-designated pit stop around mile 10, and then I was able to run the final miles to the finish. But if the race organizers could get at least a few more porta-potties along the course, that would make this race pretty perfect! 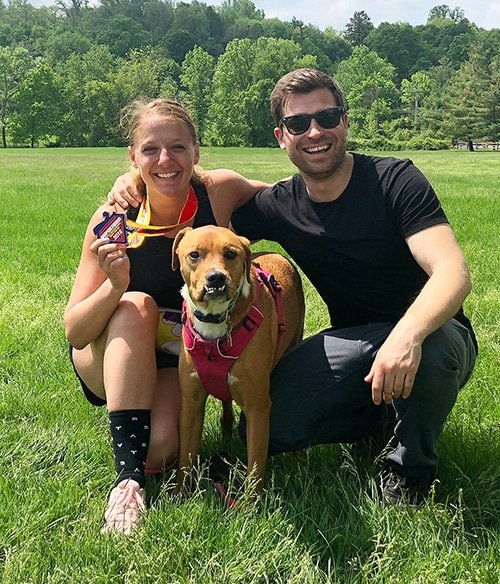 Post-race with the fam. Probably telling them my porta-potty stories. I need more material.

Brian really is the world’s greatest race spectator. He and Ellie drove me to the start, and I said I’d see them at the finish. Instead, they ended up coming out at the start, so I saw them right when we got running. Then, they appeared out of nowhere around mile 4.5! I got so excited, and poor Ellie, she was SO happy to see me, and SO happy to be at the race, and SO wanted to jump in and run with me! It broke my heart to run away from her, but I was thrilled to see them. Then, they were at the finish, going nuts. I got a good boost and passed two dudes on my way to the line. That always feels good. (Everyone on the sidelines loved it — they were all screaming, “YEAH GIRL! GO GIRL!” Race spectators are the best.)

I liked not being able to see the finish line until I was there. You run on the bike path and into a park until the very end, and then you basically make a turn and can see the spectators and the finish. I don’t like when I can see the line but it’s really far away! 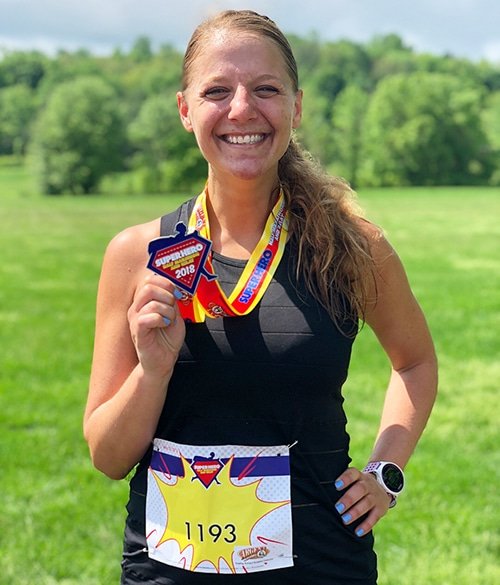 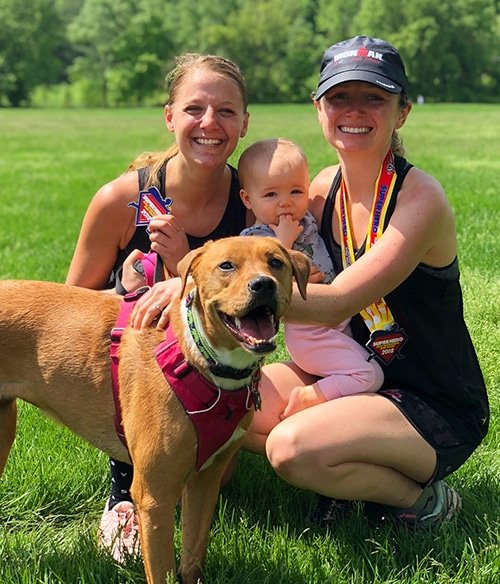 Me and my baby and Sarah and her human baby, Hadley! (She turned ONE this weekend! She is perfect.)

WOULD I RUN IT AGAIN?

Absolutely! The *only* thing I would change about this race (the controllable things, that is — so excluding the fussy stomach and the humidity) is the porta-potty situation. Two bathroom stops in a half marathon isn’t enough. (And everyone in line at the mile 8 bathroom was echoing that sentiment!)

CONGRATULATIONS to everyone who ran and raced this weekend! Tell me what you did! And THANK YOU to the Superhero Events race staff and volunteers for a great day.

5 Responses to "Superhero Half Marathon 2018 Recap"

Any chance you’re planning a promo with those headphones?? Or a promo code thing? They’re the only gift my husband wants for Father’s Day…

Click the link I included in the photo caption. $30 off with code ONTHERUN!

Oh my god this is the best blog of forever!!!

Good tips for someone who’s trying hard to switch to a healthier lifestyle. I’m training for a race with SportMe half marathon app and also on a strict diet. Things are going great for now.

Pingback: Baby on the Run: Week 17Ali On The Run