Week 14 was exciting! (For me. I realize none of this is probably very exciting for anyone else. Maybe a little for Brian. And my mom. Hi, Mom!)

Highlights from Week 14 included another visit with our midwife (and seeing the wiggly baby during another ultrasound!), and a super fun day running the New Jersey Half Marathon. It was a good week all around. To break it down… 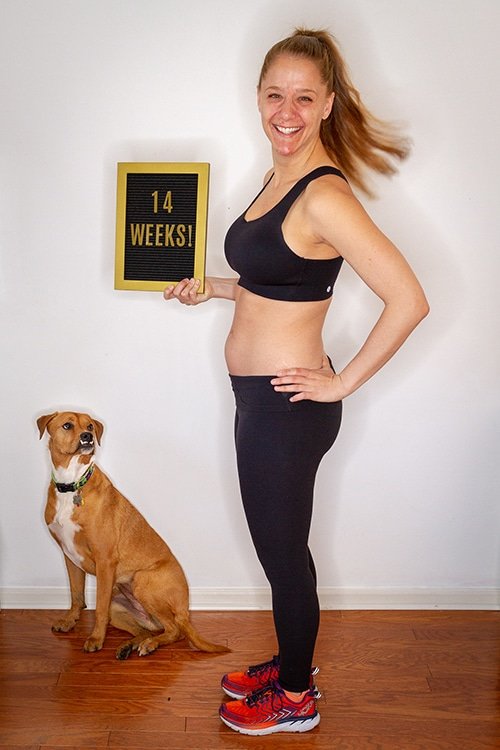 BABY IS THE SIZE OF A…

lemon, peach, an iPhone, who knows. Again, the apps are at odds.

Really good! I noticed I was really thirsty this week, and got a few headaches, which I rarely get. I also got really hot every night and did a lot of blanket throwing and begging Brian to get up — again — to make the apartment colder. I’m a peach! (Just like the size of my baby!) 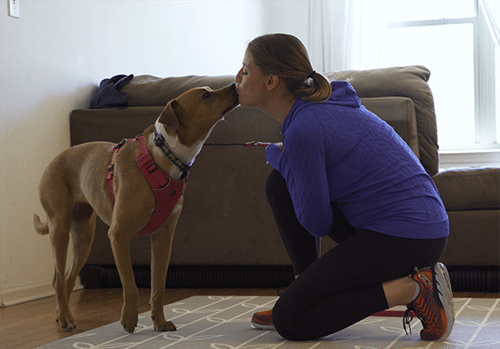 Cooked vegetables! Yay! This week felt pretty “normal” in terms of food stuff. No crazy cravings or aversions. I ate Brussels sprouts for the first time since getting pregnant and finally enjoyed them again, and I made a quinoa veggie casserole for dinner one night, which felt really victorious.

I ran three times this week! On Thursday, I ran five miles in Central Park because I wanted to see all the pretty flowers (so pretty!). On Saturday, I ran three slow miles to the smoothie shop (and when I got there, it was closed). 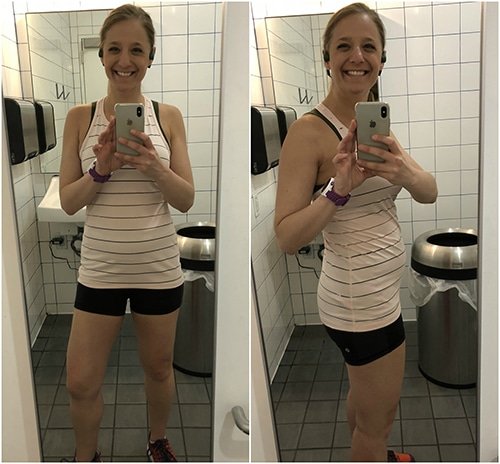 From the front, not much to see. From the side, a little something to see! (I feel like it’s way more obvious in photos like these, where I’m clothed, than the bare-bellied ones above.)

And on Sunday, I ran the New Jersey Half Marathon and could not believe how great I felt. Running hasn’t felt bad lately, but it hasn’t felt easy. I take walk breaks, I go as slow as I want, and it’s all good. But to bust out sub-9:00 miles for 13.1 miles? Crazy. 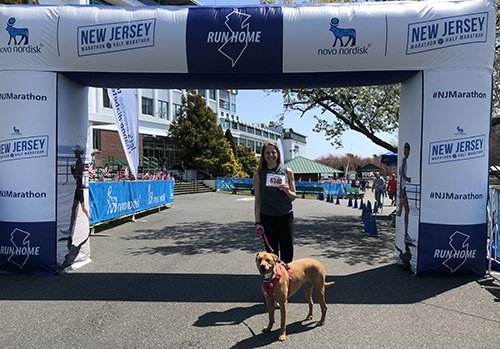 It doesn’t really matter, because people are starting to notice this little bump I’m growing! I think it’s especially noticeable because I pretty much live in workout clothes. But this week, Miss Debbie — she’s the evening concierge at our building and Ellie is obsessed with her, so we spend lots of time in the lobby! — called me out and asked if there was “anything I needed to tell her.” A few people at Orangetheory have also commented, which is funny, because I can tell they know and want to say something but don’t want to be rude and say something along the lines of, “Hey, you come here often but you seem to be gaining weight. Are you doing it wrong, or are you pregnant?” And a few of our neighbors have also made the “I wanted to ask but didn’t want to ask” comment. So it’s there! It’s happening. I love it, but also feel like 1. It’s still just a growing belly from eating a ton of macaroni for 12 weeks straight vs. a “baby bump,” and 2. Many of my friends have told me they didn’t start showing until 20 weeks, and yet, here we are. Bumping. YOLO! 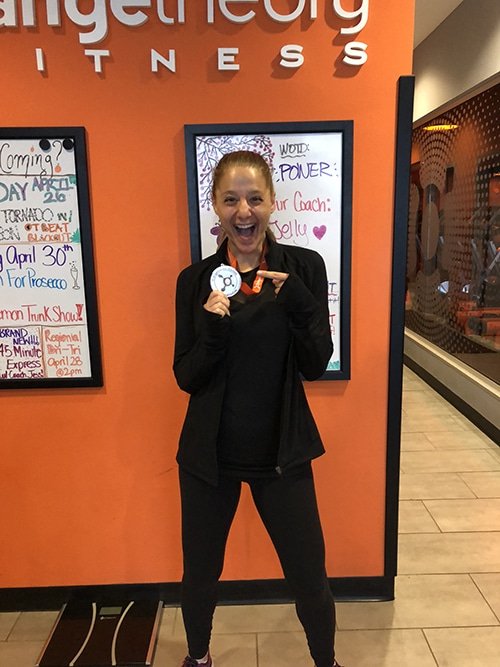 I got second place in our studio’s ultra-marathon challenge! I didn’t know it was a competition! Yay!

Oh just wait. Per the midwife’s recommendation, I ordered four new books this week. Fortunately I’m traveling next week, so I’ll have lots of time to dive in!

Good. Still side-sleep training. Still failing. And the crazy dreams continue. The most memorable dream from this week was that I was driving with my friend Chris Heuisler and I made a wrong turn and tried to fix it and the car ended up in a tree dangling over the Midtown Tunnel. Then Brian showed up and suddenly I wasn’t wearing a shirt (I had a bra on, though!) and Brian was like, “Ummm, why are you shirtless with Chris Heuisler at the Midtown Tunnel, and why is the car in a tree?” And I was like, “NOTHING HAPPENED, IT’S FINE.” I told Brian this dream saga when I woke up and he thought it was hilarious. If Brian had a dream about driving around topless with some chick, I would probably be mad at him in real life for a month. We’re so different! 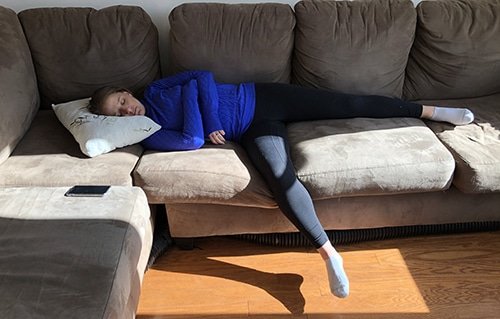 What would I have done without Midwife Kristin? This woman is amazing, and I look forward to our visits so much. We had our third appointment (second with her) on Friday, and it was so much fun. The baby is measuring right on track, and the ultrasound technician (sonographer? what term should I be using here? I want to get it right!) was really helpful and wonderful. I’ll be honest, I rarely see what she’s talking about. She’ll point at stuff and Brian will get all excited and say he sees it, but I don’t see it. (Yes, like Rachel from Friends.) And then I’ll be like, “Wait, where is it? Can you show me again?” And she’ll point it out again and I still don’t really see it. But this week, I could very clearly see the baby’s brain, which was crazy, and she showed us some fingers and arms and legs and a very excited jazz hand up in the air! 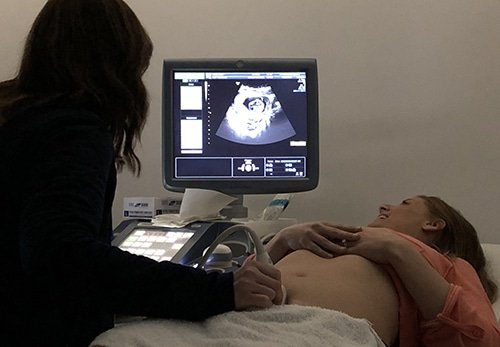 THIS IS SO FUN!

She told us the baby looks “happy” and “photogenic,” and everyone in the office kept looking at the ultrasound picture and saying that the baby is cute. I know that’s their job or whatever but oh my god, I love them. Seriously, when can I add Doula Jessica as my Facebook friend? It’s still too soon, right?

Then, when we sat down in the midwife’s office, the first thing she asked was, “How is your Crohn’s?” She answered every question I had before I even asked it, and was so thorough and helpful. She spent so much time with us and really took the time to talk through everything we could think of, plus she recommended more books for us to read (including one specifically for Brian, which he’s excited about), and recommended a few face products to try out. (I’ll test them and report back!) She also set me up with a clinical dietitian so we can talk about some Crohn’s-specific things that may come into play after giving birth. 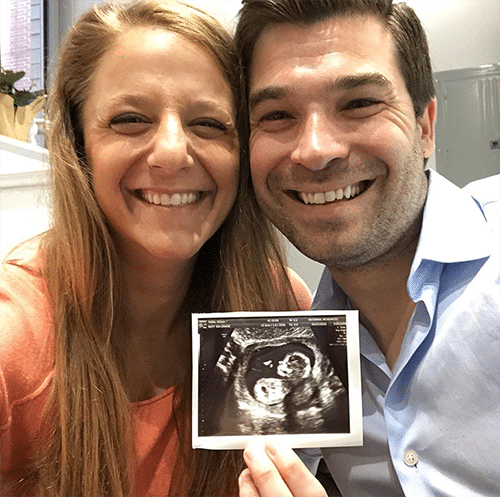 That little white spot near the nose is a jazz hand, I swear.

I have been wanting to get a massage, especially since running the half this weekend, and told her I didn’t want to get a “weak pre-natal massage,” and she recommended a place that will “really beat me up” and that specializes in pregnant women. I’m going on Thursday, so if you’re in Hoboken and want a recommendation and I like it, let me know and I’ll share!

The first time we met with Kristin, I asked her what the most important thing to consider during pregnancy was, and she said, “That’s a great question, and one you should keep asking every time you’re here, because the answer will keep changing.” So this time, as directed, I asked what we should be focusing on right now.

“Keep working out and keep having a lot of sex.” Roger that, boss.

Baby on the Run: Week 38
Back to Blog
Leave a Comment
Posted in Pregnancy and tagged Pregnancy-

Love the update! And you quoted Friends!! Only the best show ever 🙂 I am pretty sure everything I know about pregnancy and having babies is from Phoebe’s triplets and Rachel having Emma. But I digress.

Cannot believe you ran a half marathon in that time while pregnant!? You are superwoman!

This sounds exactly like how my pregnancy went with all the eating peeing etc! I was told to not worry too much about the back sleeping, if you do compress the vein thingy you’ll get numb legs but your body will wake you up pretty quickly 😊
So excited for you! I’ve been a lurker since the very start of your blog and have done a lot of the same life experiences about 6 months after you so I was devastated when I fell pregnant last year and didn’t have your words of wisdom to follow lol

What are the crohns specific things that would come into play after the birth that would not be playing a part during pregnancy?