The Ali on the Run Show

I was so excited to record this episode with one of my favorite journalists, news anchors, and role models, Natalie Morales. Natalie is best known from her time on NBC’s Today show, where she was a national correspondent, news anchor, and co-host in New York City before moving on to become the show’s West Coast anchor. During her time at Today, Natalie covered everything from the Olympics, the Royal Wedding, the Chilean miner rescue, and President Obama’s inauguration to events like Hurricane Katrina, Hurricane Sandy, and the death of Pope John Paul II. Last year, Natalie — along with her husband, two sons, and rescue pup, Zara — traded city life for sunny Los Angeles, where she is currently the host of Access Hollywood and co-host of Access Hollywood Live.

On this episode, Natalie talks about the most memorable story she covered during her time at the Today news desk, and opens up about why she chose to move to California. She talks about growing up in an Air Force family and moving around a lot, and shares what she did to land her job at NBC. (Spoiler: She worked hard for it!) She opens up about whether she’s ever been scared on the job, where she was on September 11, 2001, the interviews that made her nervous during her time at Today, and the pressure women in the media face when it comes to their appearances.

Natalie may live in L.A. now, but she was a Jersey Girl before that! She went to Rutgers University, graduated summa cum laude, and eventually moved to Hoboken where she (and Zara, her “best little running buddy”) ran on the same waterfront path I run on every day. During our conversation, Natalie talks about how and why she started running, and what it took to qualify for the Boston Marathon while working at Today. (She boasts a 3:31 marathon PR, and is also a triathlete.) It was such a treat recording this episode in person with Natalie at the Access Hollywood studios at 30 Rockefeller Plaza in New York City. Enjoy! 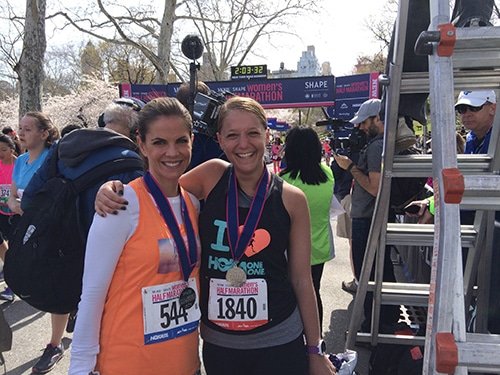 Natalie and me after the 2015 MORE/Fitness/SHAPE Half Marathon

Stuff We Mention on the Show:

Celine Dion on the Today Show

The Secret History by Donna Tartt

Thank you for listening to and supporting the Ali on the Run Show! If you’re enjoying the show, please subscribe and leave a rating and review on iTunes. Spread the run love!

Ali on the Run Show Episode 8: 10 People Who Have Changed My Running Life

Ali on the Run Show Episode 26: My Running Story

Pingback: An Update on the Crohn's Situation + Things I'm Loving Right NowAli On The Run