Yesterday was a really good day.

On paper, there was nothing magical about it. It was just a rainy Tuesday in New York City. 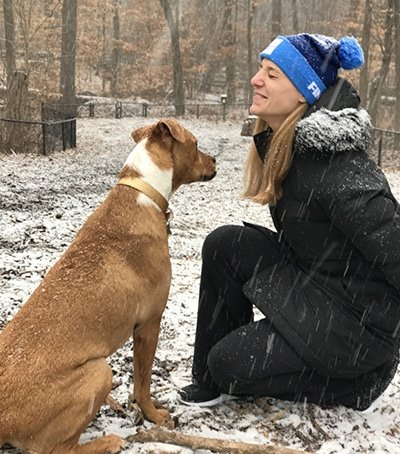 Kiss me. Under the snowy sky. Kiss me. (Like that song from She’s All That…)

That’s not to say I didn’t exhibit Crohnsy symptoms here and there. I did my usual back-and-forth to the bathroom a handful of times in the morning, but other than that, I was pretty much good to go.

I took Ellie to school in the morning, and didn’t have to bolt into the bathroom at the smoothie place next door.

I walked to the ferry station and didn’t have to ponder whether or not I might need to run into the porta-potty at the construction site between my apartment and the terminal (a roughly four-minute walk).

I took the ferry into the city and didn’t run off the boat at the last minute to use the bathroom just one more time. (Which I’ve had to do a handful of times, and then I miss the boat entirely and have to wait for the next one. Not super ideal when you’re trying to get somewhere on time.) 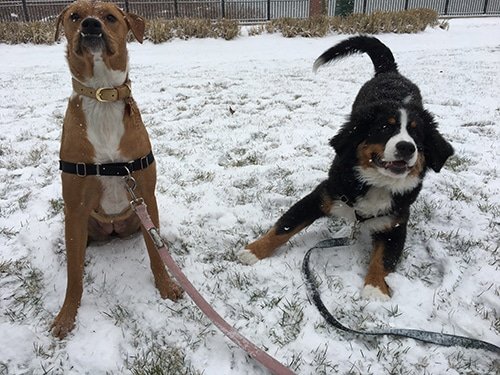 UNRELATED PIC OF ELLIE AND JASPER

After that, I went to a spin class. I was on my usual bike right next to the door and got all set up without concerning myself too much with going to the bathroom just one more time real quick before class started. And then, when the staff wheeled in an additional bike for a woman who “wanted to be close to the door,” thus blocking my quick escape route, I didn’t totally freak out. I was a little annoyed, mostly because there were like 32 free bikes in the room and she demanded a bike be wheeled in just for her, thereby ruining my perfect plan of being the closest to the door/bathroom — but figured hey, maybe she has Crohn’s, too!

Usually my stomach feels a little off during the first few minutes of class, but then I’m able to get into a groove for a while. When the class ends in a sprint or tough climb, though, I’m a bit of a mess. And that’s when I usually panic and have to dash out of the room for the bathroom. Not yesterday, though. 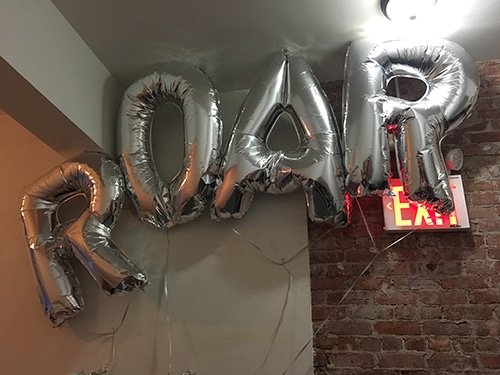 From there, I went about my day like an almost-normal human. I worked from an office for a while, and then from a Le Pain Quotidien — chosen specifically because it has more than one bathroom stall — and never had any issues. I walked to the ferry to head home, took the boat back to Jersey, swung by the grocery store, and picked up Ellie — all Crohn’s-concerns free. 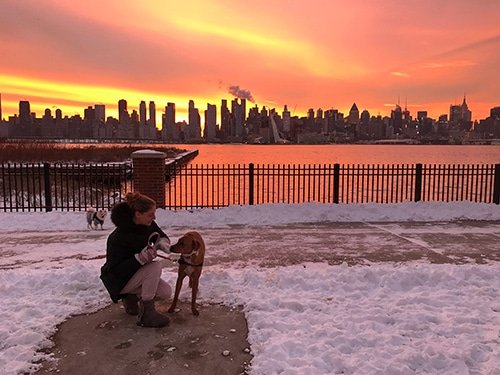 But now, I think I’m pretty damn close to stepping into the light that’s been shining from the end of the tunnel. (Does that sound like I’m dying? I mean the opposite of that. I mean I’m stepping into health and other good stuff.) Each day, I find I have more good, non-panicky, out-of-the-bathroom moments. Just two weeks ago, those moments were still fleeting. I’d have a decent few hours in the afternoon, but I’d still panic every time I needed to take Ellie outside to pee.

Now, I find I can mostly take her out worry-free. I can almost always make the walk to the ferry without needing to turn around and run back home to use the bathroom.

I find myself doing things subconsciously — things that I used to do without thinking twice but that, when I’m flaring, I don’t do at all. Things like getting out of a cab a block early because “I can just jump out here,” without freaking out about walking one whole block before getting to my destination (which I know has a bathroom). Things like making plans with friends, driving to dog parks that are 40 minutes away, or — yay — finally booking that massage I’ve been wanting. 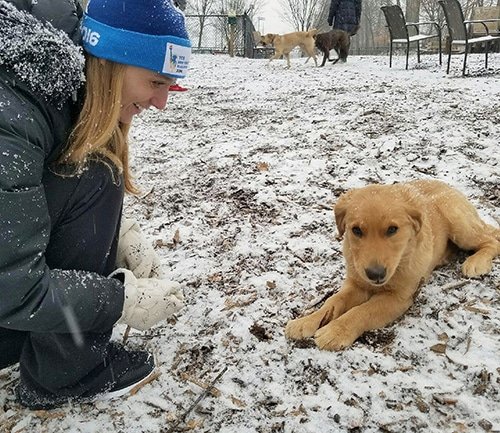 Yesterday was filled with those moments.

I am absolutely convinced that the Stelara — I’ve had two doses now — is working. I also believe that the other things I’m doing to help my body — ditching alcohol and dairy for a while, cooking [almost] all of my meals, not pushing my body much physically, getting plenty of sleep — are helping, too. 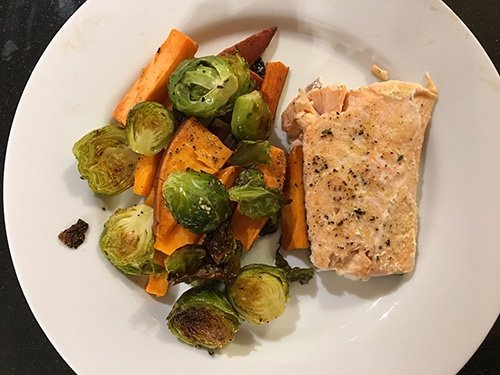 I think this is all working. I think my body is healing and recovering. I think I’m going to kick this Crohn’s flare entirely sooner rather than later. And I am, for maybe the first time in these past five months, wholly optimistic, positive, and eager to see what comes next.

(Not totally and completely sick of me yet? I wrote about how Crohn’s has helped me adore and appreciate running for Shape magazine. Check it out.)

HEY HEY WANNA PLAY? Tell me something good that happened to YOU yesterday — big, small, in or out of the bathroom. I love getting to know you and celebrating your successes, so lay them on me.

My Life With Crohn’s Disease

Wow, so happy for you, Ali. I love to hear that!

I’m so happy for you!!! Yesterday I had a good day too! After having surgery for a detached retina 7 weeks ago, I put in my contacts. And I can see! I was warned that my sight may not be 100% for a long time (if ever), but I am over-the-moon with the sight that I had. Every day is a good day, yesterday was just a heck of a lot better than some!

Maybe the avocado and eggs are more medicinal than you think!
This is great news!
I just had a great meeting with a new potential client. As a freelancer it’s exciting to connect with businesses (or in this case a non profit) that you believe in and then get to work with them. 🙂

I think it’s all the sunny avo toast. Has to be! I’m so glad you’re feeling better. #Letsgohoka

am so happy for you!

Yesterday I got an update on my new job that the paper work process is almost done!!
I used to work in a classroom, but that doesn’t go well with crohns, especially when you can’t get coverage. I haven’t really worked since thanksgiving, so I’m really eager to start a new job with my own office, and freedom to the bathroom as needed!

AND this wasn’t yesterday, but on Friday, I found the perfect wedding dress on CLEARANCE! Over $1000 cheaper than my original pick and I am beyond excited!

I’ve officially had crohns for a year, and what a year it’s been. How does one have that conversation with their employer?

SO HAPPY for your progress Ali!

I ran without stopping. For 20 minutes. I don’t even know who I am anymore.

I cooked 3 dinners tonight! Soup that I’m freezing for busy days, bbq chicken stuffed sweet potatoes for lunch thursday/friday. and then heated up some broccoli and potstickers for dinner tonight. Thank goodness I don’t cook for anyone else! (i also skipped yoga and probably won’t spin on my bike like I hoped to, but lets focus on the good stuff)..

Yay!!!! This made me so happy for you!! Been following for awhile and know it’s been super tough!!! Yay for a great day

That’s SO amazing. I remember that “climbing out and up” feeling well. Tasting freedom. My high? My 1 year old figuring out his tongue and sticking it out like a puppy tonight – too funny. Success: kicking some ass in a big meeting yesterday with my presentation. Whew! Keep on, girl! Happy for your health.

Greetings from Chicago! i’ve followed you for like 3 years since i got CD. i always look fwd to your new posts and get excited when there are new ones! (i’m a 40 yr old dood by the way) Anyway, i wanted to tell you that on my Google News feed, your article in Shape popped up! I was like, “hey, I’ve been following this lady for 3 years and now and here’s her story in Shape. Very cool article and just wanted to let you know that!

I went to the dentist twice in two days and I didn’t bite anyone, even though I really really wanted to 😉

Yay Ali – awesome to read this!

Hoooray! So happy to read this post (and to always seem more pup photos).

Last night we bought tickets for my family to see Wicked. I’ve already seen it, but am super excited to see it again and have a fun night on a weekday!

Yay!! Allllll of the jazz hands for you!
Yesterday I didn’t have to leave class for a poopmergency! I also didn’t have to stop and pick up Immodium just to get through the day, which is lovely because it’s gotten pricey!

So great to hear! You are an inspiration – you have such a great attitude.

Yesterday, I had a mid-afternoon donut, and it was glorious. 🙂

I ran today for the first time in 2 months because of a big UC flare. I think I’m on the up, and so glad you are too!

This is so great to hear!! My good news is that my Dad is improving a lot… 10 days ago he was in ICU and has kinda whacked out due to some meds (which we didn’t realize at the time). We were all quite scared by his actions, but now he is back on track and we think he’s on the road to recovery. I hope you are too!!

Great news on your health improvement. It is a victory when you can run without a bathroom break. I have not been able to lately due to flare up.

YAY! So happy for you! And thank you, I needed some inspiration today. I’ve changed the direction of my “healing path” and I know I have a few rough months ahead of me, but I’m much happier with the results this plan *should* bring. You give me hope that in a few more months I will also be able to do ordinary things without second guessing or panicking. I truly hope things only get better for you!

I set a wedding date!! Well….sort of. Turns out it is the day before Easter so I am changing it but close!

Yay, Ali! So glad you finally had a good day. I love that picture of Ellie with Jasper. It’s like she’s trying to be all dignified, thinking “Who is this fool puppy?” Hilarious.

Congrats! This happy news warms my heart!
Yesterday… i got engaged 🙂

Happy for you. At 8pm last night, I came to the end of a glorious 56 hour symptom free period. That is the longest I’ve had since I was diagnosed in early November. I understand your happiness; good days are amazing.