I’m not necessarily a daredevil, but I am up for a certain amount of adventure from time to time. 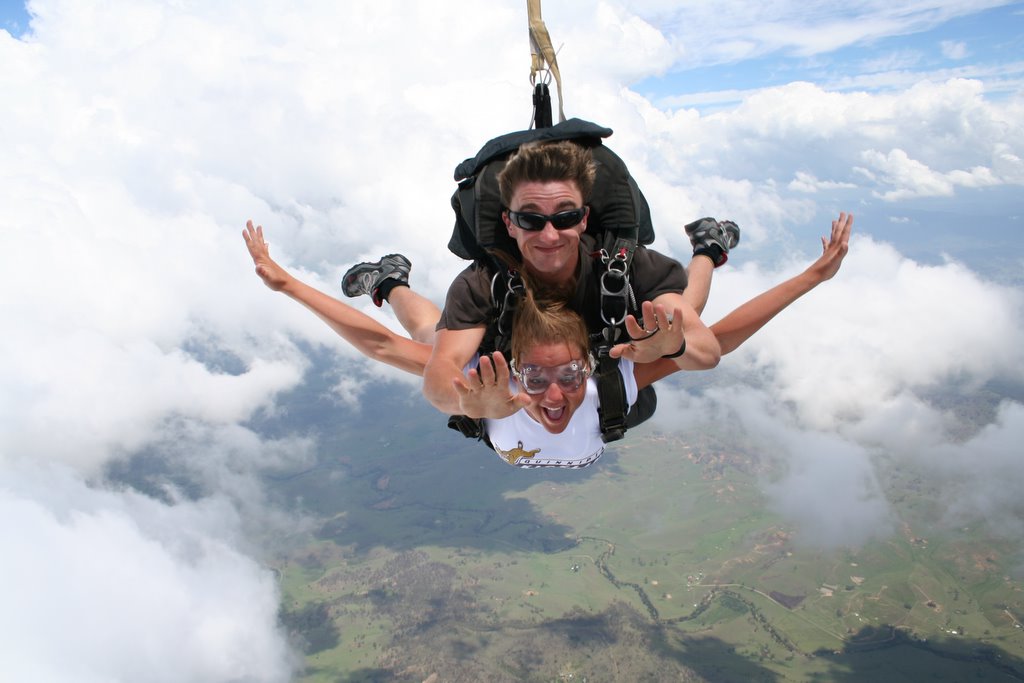 Yes. I jumped out of a plane in Australia.

Today, I felt courageous when I decided to finally try out Crunch’s much-hyped (and very popular) “AntiGravity Yoga Wings” class.

According to the class description, this is what I could expect:

Stretch further and hold challenging postures longer using a flowing fabric hammock as your only prop. With the fabric as a soft trapeze, you’ll learn simple suspension techniques to move into seemingly impossible inverted poses to relieve compressed joints and align the body from head to toe.

This is not me. Sorry. No one came to take my photo, and that's fine.

I was expecting a regular yoga class during which we’d occasionally use the silk “hammock” for support.

Instead, class felt like a circus, and instead of flowing through poses, we learned a series of “tricks” including handstands, wheel pose (while being supported by the hammock), jumps up and through the hammock and “monkey wrap” inversions. Not the yoga I’m used to! I know I’m definitely explaining all of this in a way that makes no sense. So just look at the photos.

Again, not me. But I did that same thing!

I was proud of myself for attempting everything. I was able to hold myself up using just my arms and was psyched to see that I have more upper body strength than I expected. I even tried — and succeeded — doing flips with the silks, which were way easier than I thought and lots of fun.

I hated doing this.

So why am I not raving about this class?

It made me feel nauseous!

All the swinging, rocking back and forth and staying upside-down for an extended period of time left me feeling very light-headed. At the end of class, while everyone else was relaxing in their “cocoons,” I came down into child’s pose for fear of vomiting in my hammock.

So yeah, the class is pretty cool. It’s fun to attempt all of the different tricks and I was psyched at how much I could actually do.

But will I try it again? Nope. I’ll keep my feet planted firmly on the ground where they belong.

Unless, of course, someone wants to go skydiving with me. I’m dying to go again. (Don’t tell my mom.)

You Made Me Do It

Confessions of a Gym Rat

Not A Morning Gymmer
Back to Blog
Leave a Comment
Posted in Gym Classes, Workouts, Yoga and tagged AntiGravity Yoga Wings, Crunch-

11 Responses to "I Do Not Like To Be Upside Down"

That would make me nauseous too. Very cool that you tried it! And you could not pay me to go skydiving.

That class looks fun, but also the kind of thing I could see myself trying just once.

I went skydiving for my now-roomie’s 21st birthday three years ago and had so much fun! I would do it again in a heartbeat if it wasn’t so expensive.

I would go back to anti-gravity yoga, but I most definitely will not go skydiving. Glad you got to experience the class, but sorry it caused nausea!

Wow, that looks crazy!! I don’t think I would like it either – all the being upside down and not having my feet on the ground would freak me out. But I’m sure it’s a great workout! Good for you for trying that out – I’m not sure I’d even do that.

That looks really freaking cool! But I’m glad you posted an honest response. I think I could get sick doing that too!

Wow…I’ve never heard of this type of yoga before. I’m intrigued, but I get motion sickness pretty easily, and I can imagine that I’d feel sick and lightheaded pretty quickly. Thanks for sharing it:)

You are one brave soul for skydiving! I get so incredibly air sick and have this uncanny fear of heights… I’d probably pass out or throw up the whole time.

Wow, that is brave of you! I can barely attend a regular yoga class for fear I will look like I have no idea of what I’m doing (not to mention the $$$). But I don’t blame you for not loving the class. I’m not sure how relaxing it would be, especially because I feel like I would have fallen out of the little hammock thing. 😉 At least you tried though!

I’m in no way afraid of heights, but I would be petrified to hang in the air with my head down. Major props for being brave enough to try it!!

Pingback: Finding Grace In Your Fear | Ali on the Run

Pingback: Measuring My Year In Sweat | Ali on the Run