Good morning! I hope everyone is having a wonderful day so far. We’re halfway through the work week!

When ABS and I first made the decision to move in together, I was ecstatic. Never nervous, just super excited.

When he came up with the idea for me to move into his apartment for a few months so we could save money, that’s when the nerves kicked in.

ABS has a great place, but it’s not really my style, so to speak. (Though I must say, it’s quickly becoming my style!) I had to major concerns about moving from my apartment, located in NYC’s very convenient and accessible midtown west neighborhood, to his apartment, on the lovely but less convenient Upper East Side:

I’m happy to report that just three work-days into my (our?) new lifestyle, my fears are quickly being eased.

It’s possible that I’ll never love another running path as much as I grew to love my 5-mile daily route on the Hudson River Parkway. I knew every mile marker, every turn, every change in surface. I even recognized most of the faces I’d pass every morning: Soccer Jersey Guy, Cute Little Asian Girl, Grey Sweatshirt Chick, Adorable Old Couple With Bad Knees… 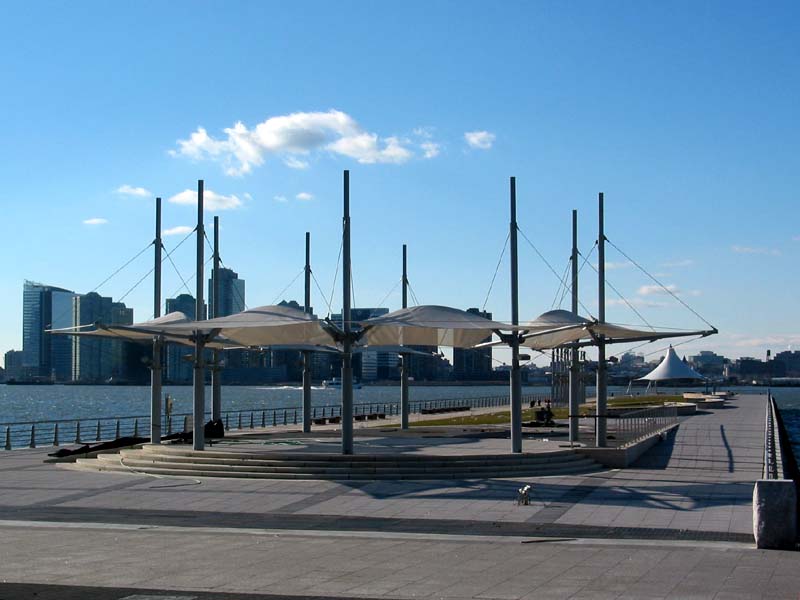 Pier 45 on The Hudson River Parkway: Look how pretty!

I also grew accustomed to the convenient, accessible bathrooms on the HRP. They were everywhere: Chelsea Piers, at the start of the river path, midway down the river path, etc. Those bathrooms saved my butt (literally? ew.) many times. As I’ve mentioned, I have Crohn’s Disease, so my bathroom needs are pretty important. It’s early, so that’s as detailed as I’ll get this morning, but you get the idea.

Anyway. It’s hard to complain, since my morning running route is now a loop in the incomparable Central Park. I mean, come on. It’s Central Park! It’s beautiful, I’ll never be alone running there, and there are a ton of different routes and options within the park.

Running around the Central Park Reservoir isn’t so bad…

This morning, because my stomach wasn’t cooperating and then I was short on time, I opted for a change: I headed toward the East River for a 4-mile jaunt along the Promenade. I’ve always loved it up there. I love the puppies that galavant with their owners through Carl Schurz Park and I love being right on the water—just like I was on the west side. 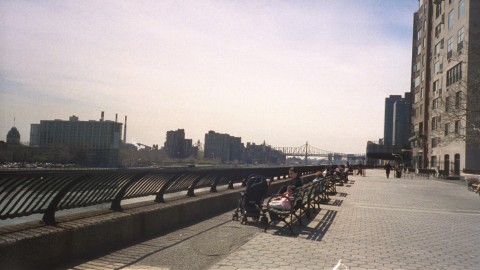 The running path along the East River

I have yet to figure out the bathroom situation on my running routes, but having my own bathroom in the morning has helped. I plan so that I have plenty of time to get out the door.

My second fear: the commute.

Turns out, it’s not so bad. I used to walk to work. Obviously that’s an ideal situation, especially in NYC where very few people are so blessed geographically. The walk wasn’t exactly pretty, but it took about 10 minutes, and you can’t beat that.

For my first two days of commuting, I took a crosstown bus to a subway. It was fine. Easy, not too crowded, and no waiting.

Today, I tested out a new route: taking the downtown 6 train. We have a winner! I enjoyed walking to the subway, it arrived as soon as I got to the platform, it wasn’t crowded (I even got a seat!) and the walk from the subway station to my office—through the beautiful and aromatic Flower District—was the perfect way to mentally prepare for the day. And it took less time than the other option!

The Flower District in the morning smells amazing!

I’m so happy that, as a Type A+ person, as I like to call myself, I’m adapting to a new environment. ABS keeps waiting for me to freak out about something, but I haven’t!

Now, onto a productive day. Things to accomplish:

DISCUSS: Have you gone through a major environmental or lifestyle change recently? Got any tips or tricks for adapting?

Jumping on the Bandwagon

Thankful Things Thursday: On Being Tired But Perky

2 Responses to "Easing My Fears"

i move to LA about 2 years ago after living on the east coast and i had never even visited california before. it took a long time to get used to it here. i think what made it easier was jumping right into work and working out. taking it one day at a time and finding the pleasure in the little things in my new environment, beach in february? YES! no shoveling snow off my car in the AM? YES! ok so most of those are weather related but i really loved that you can wear pretty much anything in LA and no matter how bizarre it is, it can be seen as fashion. that made dressing pretty easy

How gorgeous! Glad you are accommodating so well so soon!